Come play with one of Luther's three Orchestras! Perform orchestral masterworks from the baroque era to the modern day.
Home > Music > Ensembles > Orchestra 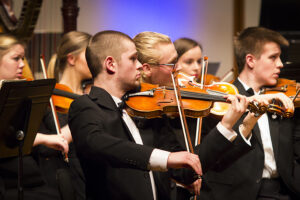 The Luther College Symphony Orchestra, Luther’s largest and oldest orchestral ensemble, maintains an active rehearsal and performance schedule during the academic year, from early September to late May. Over eighty student musicians, representing a variety of academic disciplines, perform with Symphony Orchestra. Many members also sing in a choir, play in a band or jazz ensemble, and form small chamber groups. Symphony Orchestra is conducted by Daniel Baldwin.

Symphony Orchestra tours annually in the United States and every four years maintains a three-week residency in Vienna, Austria, with a final performance at the Konzerthaus or Musikverein. Domestic tours have included trips through the Pacific Northwest, the Great Plains States, the Southeast, and the Upper Midwest. The Symphony Orchestra’s next residency will take place in January 2023.

Symphony Orchestra takes great pride in performing new music on a regular basis. Since 2001, the orchestra has been pleased to present six world premiers. The orchestra also collaborates with the Luther College choirs in biennial performances of major choral-orchestral works and in the annual Christmas at Luther festival performances.

Symphony Orchestra meets five days a week, and is made up of musicians from all class years and study areas. Auditions for the ensemble take place every fall. Throughout the year Symphony Orchestra performs a full-length fall concert, two full-length spring concerts, is featured at Christmas at Luther, and is included in the Homecoming and Commencement Weekend concerts. The orchestra also tours annually at the regional, national, or international level. Click below to learn more about ensemble tours. 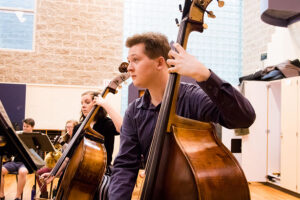 The Chamber Orchestra specializes in repertoire for small orchestra and mixed chamber ensembles ranging from the Baroque era to the 21st century. In addition to its own concert schedule, Chamber Orchestra performs with the Luther College Opera Workshop.

Chamber Orchestra meets 3 days a week, and is made up of musicians from all class years and study areas, frequently including musicians who are also in Symphony Orchestra. Auditions for the ensemble take place every fall. Throughout the year Chamber Orchestra performs concerts on-campus, and frequently accompanies Luther’s Spring Opera Production.

Philharmonia is directed by Spencer Martin

Philharmonia meets 3 days a week, and is made up of musicians from all class years and study areas. Auditions for the ensemble take place every fall. Throughout the year Chamber Orchestra performs concerts on-campus.

Master your instrument by studying strings at Luther College! During your course of study you will learn about a wide range of repertoire, music theory, and proper technique for your instrument.