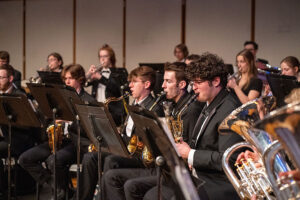 The Luther College Concert Band was formed in 1878, laying the foundation for what would become the college’s long-standing tradition of musical excellence. Concert Band is now one of the oldest touring organizations in the nation and ranks among the country’s outstanding undergraduate college bands. Concert Band is Luther College’s principal band ensemble.

From its beginnings as a student-directed brass and percussion ensemble formed with instruments from a discontinued community band, Concert Band rose to its current position of prestige through the influential directorships of Carlo Sperati (1905-1943), Weston Noble (1948-1973), and Frederick Nyline (1973-2011) and Joan deAlbuquerque (2011-2020). Since 2020 the Luther College Concert Band has been directed by Cory Near.

Concert band meets five days a week, and is made up of musicians from all grade levels and study areas. Auditions for the ensemble take place every fall. Throughout the year Concert band hosts a variety of performances on-campus as well as maintaining an annual touring schedule, at the regional, national, and international level, in rotation with our other principal ensembles. 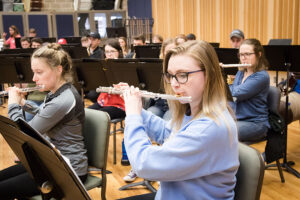 Symphonic Band is a newly formed ensemble open to all students on campus. In addition to a Family Weekend performance, the Symphonic Band enjoys regular concerts and special performances throughout the academic year. Since 2020 the Luther College Symphonic Band has been directed by Cory Near.

Symphonic Band meets 3 days a week, and is made up of musicians from all grade levels and study areas. Membership in the ensemble requires a chair-placement assessment, which will occur at the beginning of each semester.

Master your instrument by studying woodwinds, brass and, percussion at Luther College! During your course of study you will learn about a wide range of repertoire, music theory, and proper technique for your instrument.