As a music education major at Luther, Nancy Nickerson Lee ’82 had a goal: to become a high school choral director. “And I did that,” she says. “That was part of my journey through life. 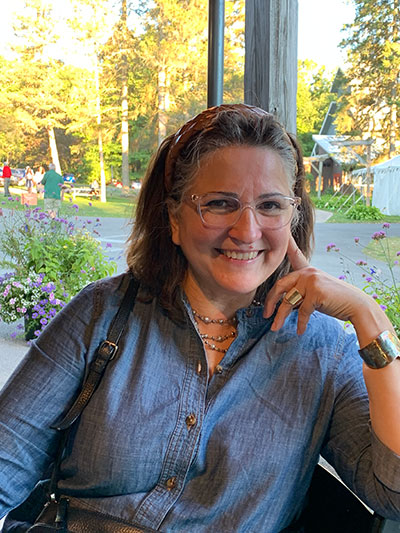 But when she was asked to step in and direct a musical, she says, “What I realized is that I was a better fit in the theatre world than the straight choral world. To me, it felt much more collaborative, and that’s where I thrive—in collaboration.”

Over her 35-year teaching career, Nickerson Lee has garnered an incredible track record as a performing arts educator. At Southwest and Washburn high schools in Minneapolis, she started robust choirs and musical theatre programs from scratch. Among many other accolades, she’s been recognized four times by the Tony Awards for Excellence in Theatre Education.

As a high school educator, Nickerson Lee strove to create performing arts communities that reflected the school population. She actively recruited immigrant and minoritized students. She directed shows that featured diverse characters, like a bilingual production of In the Heights and a staging of West Side Story that included second-language learners who learned their roles through stage directions translated into Spanish. “We used that show to create a bond between two communities and two cultures within our school,” Nickerson Lee says.

During this time, Nickerson Lee was also an adjunct instructor at St. Olaf College, teaching music education students to prepare young learners, she says, “to use the performing arts as a means of exploring the total education that every kid deserves.” Through this, Nickerson Lee discovered that she really enjoyed working with college-age students who’d already committed to a career in music.

Around this time, two of Nickerson Lee’s sons were training for lives in the performing arts, in part through participating in summer stock theatre on the East Coast. “It’s everywhere there,” she says. “And kids who do it get to really hone their skills. We have a little bit of it in the Midwest, but not like that. It really inspired me to think, Maybe this is the next journey I want to take.” 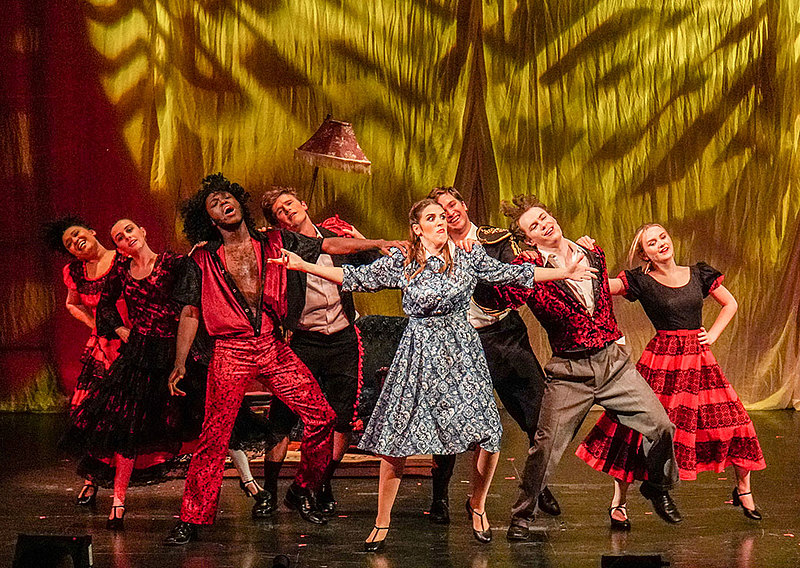 Nickerson Lee started to hatch a plan to bring the sorts of opportunities she’d created for students in Minneapolis to rural settings like the one in which she’d grown up. She also felt drawn to preparing future performing artists who were committed to their craft.

“I’ve seen my sons’ journeys,” she says, “and I just want to give other kids at that level the opportunity to really hone their skills so that when their ticket comes up, they’re ready to go.”

Nickerson Lee founded Cedar Summerstock Theater in 2017. She set up in her hometown of St. Ansgar, Iowa, in the old elementary school building, which had been abandoned the year before and was scheduled for demolition. 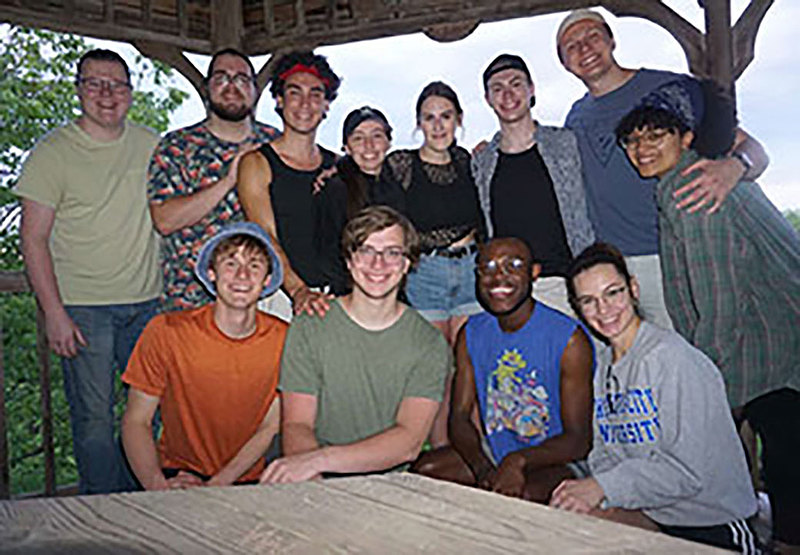 “We’re in a town in a rural county in Iowa that is not a tourist destination. It is a farm community, an agriculturally based community, but with a beautiful auditorium. The infrastructure was already here to do this type of program,” she says.

College students—about a dozen actors, three technicians, and two musicians—live and rehearse in the old school building but perform ten minutes away at the Cedar River Complex in Osage, Iowa.

This dual-building setup is critical to Cedar’s modus operandi. The company takes just 10 days to learn and rehearse a show in St. Ansgar. They launch it in Osage, then the following day begin practicing the next show in St. Ansgar while continuing the current run in Osage.

The fast clip has been a real learning experience for Natosha Guldan ’23, one of two Luther students in the 2022 cast (Gabe Goeddeke ’24 is the other). “Cedar moves at a much faster pace than Luther productions and functions with smaller casts,” Guldan says. “We have less time to get direct feedback from our directors, so it’s important that we come with lines memorized, music learned, and that we’ve thought of acting choices to choose from.” 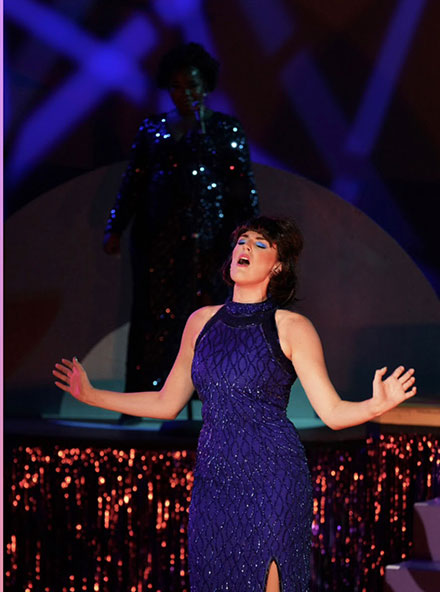 Natosha Guldan ’23, performing here in Beehive: The ’60s Musical, was one of two Luther students at Cedar last summer. She says, “The community surrounding the Osage area is bountiful in Luther alumni. Even though my cast is from all over the country, after every show I am greeted by someone who went or knows someone who went to Luther. I’m currently beginning rehearsals for Matilda the Musical in which our young actress who plays Matilda has two Luther parents! Luther students are more than welcome in this area, and Decorah is only an hour away!” Photo by Thomas John Wallace.

In addition to introducing young actors and technicians to a different production pace, Nickerson Lee makes the point that they also experience another culture. Most of Cedar’s students come from urban theatre programs. Learning about a way of life in rural Iowa helps them develop empathy and build a deeper well of experience from which to draw.

Their presence in town also helps revitalize the community. Not only does it offer high-quality live theatre in a place that normally doesn’t have close access to it, but it also has a multiplying effect. Cedar’s presence in the old St. Ansgar elementary school building has attracted other new tenants. It’s become a multipurpose space called South Square, which hosts live music, a history center, a gallery, classes, workshops, and community events.

Music as a vessel for something bigger

“The first thing that drew me to the field of music education was how it has an impact on communities and individuals,” says Nickerson Lee. In fact, Cedar’s tagline is “creating artists, connecting communities”—and it certainly does that.

But in the process, it’s set into motion something else. It’s created a chain of mentorship that has a trickle-down effect. Cedar brings in industry professionals—directors, choreographers, and technicians, mostly from the Twin Cities—who teach Cedar students. Cedar students, in turn, run a two-week summer camp for local kids, who also play child roles and help with tech during summer productions.

Nickerson Lee sees the effect this has on the local curriculum. “I’m seeing that they’re doing more musical theatre, and even the quality of the kids who are coming into our camp is really growing—every year they’re getting stronger.” 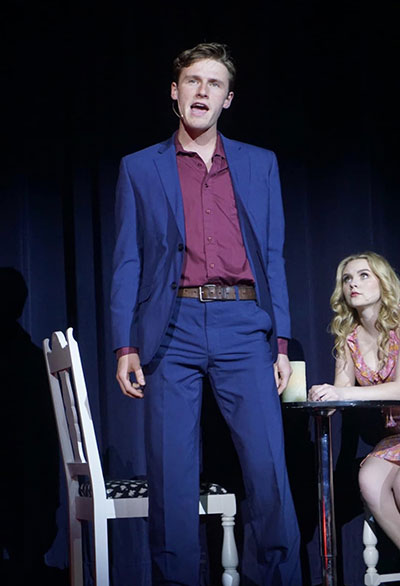 This is exactly what Nickerson Lee was aiming for when she founded Cedar in the middle of Mitchell County, Iowa. “It’s really about opportunity,” she says. “I noticed that rural kids have less opportunity to do this level of work than the kids in the city have—it’s just not there for them.”

Of course, it’s also about something less tangible. “I always saw music as a vessel for something bigger,” says Nickerson Lee. “My whole teaching career has been about helping people understand their own humanity, but it also helps the community at large. It helps people see how they fit within the larger context of the world, and it creates empathy with each other. Music was the vessel to do that.”

Drawing on the Luther network

Lynne Rothrock ’85 studied music education at Luther, then went on to forge her own path. She earned a master’s degree in classical voice at Western Michigan University, in a program that offered training in a wide range of styles. She moved to Nashville, but, she says, “I wanted to perform more and got tired of waiting for theatre companies to produce shows that I might be right for.” 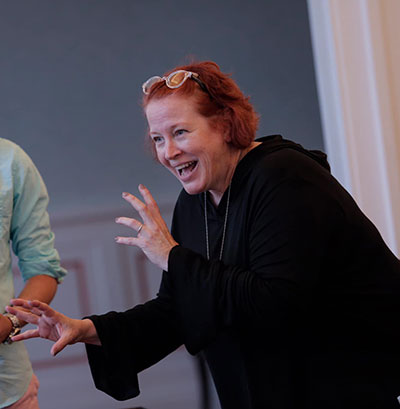 So she started putting together her own shows. “If you’re a cabaret singer, you can sing anything,” she says. “I started collecting songs that I love, and I discovered that my personality was suited to entertaining an audience between songs. In the journey, I discovered that performing as myself was another avenue that actually was much wider open.”

Rothrock’s taken this niche she’s carved out to venues and colleges across the country. She tours widely but calls Cedar Rapids, Iowa, home and teaches at Luther in the musical theatre program. Now she teaches at Cedar too.

In addition to its slate of traditional musicals, Cedar runs two traveling cabaret shows each summer that Rothrock helps create and train students to perform. These outreach shows act as marketing—allowing nearby communities to see the quality of performers that Cedar draws—and also help the young actors develop more skills.