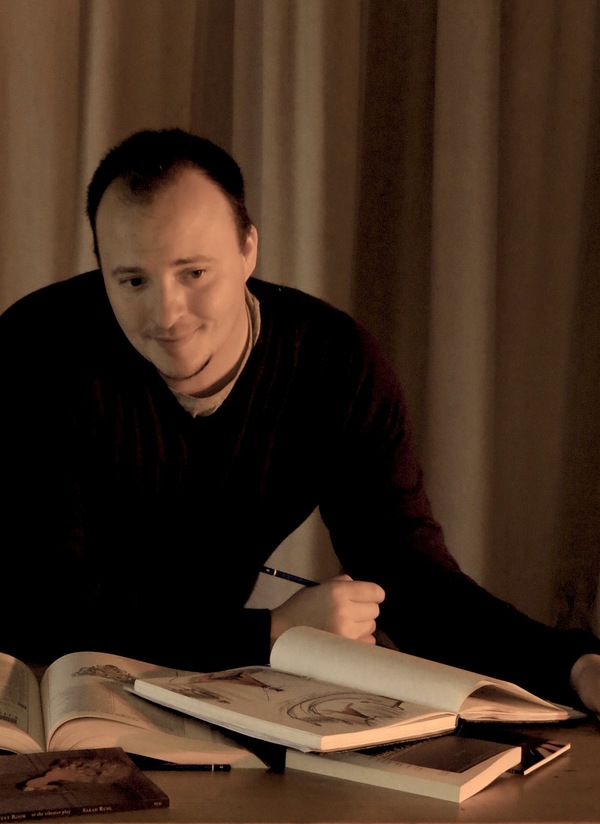 Office: Center for the Arts 110

Before joining Luther College’s faculty in 2013, Robert Vrtis worked in Eugene, Oregon as a director and teacher. There, he also earned his PhD in Theatre Arts at the University of Oregon. His dissertation, “Plague and Mirror: Metaphors of Emotional Transfer and Their Effect on the Actor-Audience Relationship in Theatre,” analyzed the metaphorical structures of theatre practitioners including William Shakespeare and Antonin Artaud in order to determine how metaphor shapes the emotional relationship between actors and audience.

As a director he has most recently directed Cabaret, boom, Fahrenheit 451, The Highest Tide, and Masha (an adaptation of Anton Chekhov’s work). Other directing credits include Eleemosynary, Twelfth Night, Tartuffe, Atomic Farmgirl, Arabian Night, WASP, and Only Ten Minutes to Buffalo.

At Luther, he will primarily teach courses in acting and directing for the theatre. Currently, he is excited to be structuring the acting sequence to include classes in performing Shakespeare, Meisner Technique, Auditioning, Improvisation and Clown.

An intensive experiental research ensemble devoted to crafting, creating, developing, and producing a faculty-directed theatre and/or dance event. Students in this course will be involved in research and theoretical discussion supporting active involvement in a collaborative process of performance, design and production management, such as director/designer assistant; set construction; lighting, sound, costume, properties, make-up/hair, and stage management.

THE 105 Acting I: Text in Performance

An introduction to performance concepts and skills utilizing text as a beginning point for the performance experience. The course will include analysis and performance of diverse texts through solo and group work, incorporating elements of movement, spoken text, and music. Letters, novels, poems, plays, biographies, journals, and newspapers are examples of potential performance texts.

THE 205 Acting: Improvisation, Ensemble, and Clown

Improvisation teaches actors to perform both as creative individuals and as part of an ensemble. Students in this course will learn to collaborate through exercises that encourage them to work as a piece of a whole and without the benefit of a script. Furthermore, this class will explore the creative potential and emotional flexibility offered by Clown. Students will devise solo and group acts that deepen their understanding of the spirit of clown. By learning to see the world from the unique perspective of a Clown, students will learn about the power of imagination and their ability to emotionally invest in the fantastic.

Focusing mainly on plays authored in the past 50 years, the works of American and British playwrights will comprise about a third of the reading with the remaining plays from around the globe with particular emphasis on non-European playwrights. Introduction to production analysis (how a play works in the theatre) and attention to student writing.

Acting Shakespeare begins with the premise that a deeper understanding of Shakespeare’s works is reached in performing them. This course will place an emphasis on freeing the voice for use as a primary vehicle for conveying meaning. Students will develop tools for analyzing, speaking and embodying Shakespeare’s text. Students will analyze and perform scenes while investigating the plays from which they are selected. Learning the structure of the text will enable students to use it as a springboard for action, emotion, and character.

A studio course that offers rotating topics exploring different approaches to acting. Topics may include performing for musical theatre, Meisner technique, advanced scene study, rough theatre practices, audition technique, and others. Each topic will include elements of research, writing, and performance. This course may be repeated up to three times for credit under different topics.

A study of the theories and practices related to directing for the theatre. Coursework will include emphasis on communication principles and script analysis as well as laboratory experiences in directing.