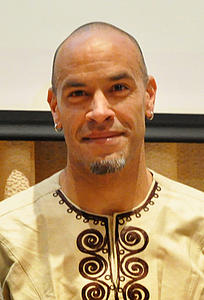 Professor of Africana Studies and English

Novian Whitsitt is a professor of Africana Studies and English at Luther College, particularly interested in gender analysis of African, Caribbean, and African-American literature. Some of his course topics include African American Literature, North American Slave Narrative, and Literature of the African Peoples.

Novian regularly offers a study abroad course to Ghana during the January semester, entitled “Christianity, Slavery, and Their Depiction in Ghanaian Literature.” The course looks at the historical connections between slavery and Christianity during the Trans-Atlantic slave trade while visiting numerous Ghanaian historical sites related to the West African slave commerce. Most recently, his research has focused on African-American slave narratives, more specifically the use of the black cultural expression of “masking” in Harriet Jacobs’s Incidents in the Life of a Slave Girl.

ENG 485 North American Slave Narrative
The genre of slave narratives has been essential to the study of American history and literature. The course will examine how this body of writing shaped national debates about the nature of slavery, race, freedom, and American identity. The seminar will use antebellum and post-emancipation narratives, along with assigned secondary reading, to examine the slaves’ lived experiences as they transitioned from bondage to freedom. As we read the narratives, we’ll pay special attention to the rhetorical craft of writers and the different audiences for whom they wrote. In addition to reading works by the likes of Solomon Northrup, Frederick Douglass, and Harriet Jacobs, we will sample some of the fictional descendants of slave narratives, such as the novels of Edward Jones, Ismael Reed, and Octavia Butler.

AFRS 147 Lit of the African Peoples
Modern African writers are some of the most dynamic and innovative writers as they draw from and respond to different literary traditions, such as their own oral and written traditions, as well as European models. This course serves as an introduction to the various themes and styles of written literature of the 20th century. Central to discussion will be an analysis of gender within various African cultural contexts. Understanding constructions of masculinity and femininity, dominant female and male roles in society, and the ways in which the works challenge traditional norms of gender will be priorities within applied theoretical approaches.

PAID 450 The Color of Change
This course will take students on a journey through the intellectual landscape of the black American experience. From the moment of their arrival upon American shores, blacks began creating intellectual analyses of racial oppression, seeking to observe, comment upon, and transform a world which limited their social inclusion. Provocative thought committed to creating a more just and ethical America has come from the likes of slaves, abolitionists, writers, politicians, musicians and dancers, artists, educators, lawyers, journalists, civil rights leaders, and athletes. The selection of intellectual figures will come from an array of professional backgrounds and social experiences, thus serving to represent the diveristy of thought and creativity which characterizes black intellectual contributions to social change in America.