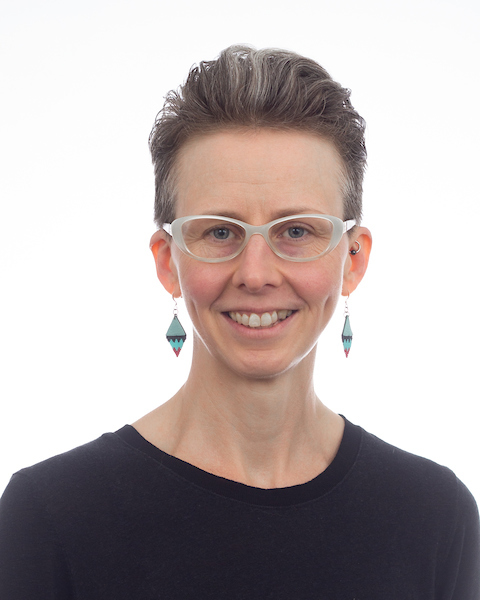 Holly Moore has been a professor in the philosophy department since 2010, focusing on the topics of ancient philosophy and 20th century continental philosophy. Some of her course topics include Introduction to Philosophy, Logic, Ancient Philosophy, Feminist Philosophy, Philosophy of Art and 19th and 20th Century Philosophy.

During January Term, Professor Moore has co-led a course where students explore the relationships between practices and theories of art through the lenses of philosophy and art history. Students learn theoretical approaches in ethical art criticism and aestheticism and then apply these to contemporary debates about the role of politics in art, censorship and government sponsorship of art, and problems related to the representation of women, ethnic and racial groups, and children in art.

In coming terms, Professor Moore will be teaching a course on rhetoric in the Intersections program as well as teaching a seminar on Queer Theory.

Most people think that you ask a question in order to get an answer. Philosophers, however, tend to think that the question is the most important part. I am especially interested in the questions of philosophy, whether ethical, metaphysical, or aesthetic. Studying philosophy has allowed me to pose questions about what matters most to me, and it has also made it easier to distinguish adequate and inadequate responses to those questions. Philosophy allows you to think well, and I think this is an essential part of living a good life.

An introduction to basic questions in philosophy concerning God, the nature of reality, knowledge and truth, human nature, morality, and the individual in society, together with the range of arguments and answers that philosophers have developed in response to them.

A study of reasoning and argumentation, introducing formal symbol systems, including propositional and predicate logic, with attention to informal logic and fallacies. (Offered Spring 2015)

An examination of the development of philosophy among the Greek speaking peoples and the civilizations they influenced. Primary focus will be on the thought of Plato and Aristotle as the major founders of western philosophical thought, with a brief review of subsequent developments in Hellenistic and Roman philosophy. Prerequisite: one course in philosophy. (Offered each fall)

Examination of feminist philosophies, including issues in epistemology, ethics, social philosophy, political philosophy, philosophy of religion and historical interpretation. Focus on the challenges which feminist theory presents to traditional philosophical assumptions in the Western tradition. Prerequisite: one course in philosophy, or two courses in women’s and gender studies. Offered alternate years. (Offered fall, even numbered years)

This course examines how commercial life and ethical life intersect. We will be reading texts from many economic, social and ethical theorists, which will provide us with a variety of structures and concepts for understanding how human beings interact and how they can live well together. These theories will also be brought to bear in analyzing specific cases of ethical issues in economic relationships. In addition, based on research groups, students will give a class presentation on the ethical issues highlighted by a specific case, facilitating discussion and reflection upon the ethical decision-making involved in the case.

PAID 450: Thinking Through Ethics of Art

This team-taught course explores the relationships between practices and theories of art through the lenses of philosophy and art history. We’ll take a thematic approach, focusing on ethical issues in the arts, such as art and censorship, recent deaccessioning controversies, use of animals in art, eco-criticism, and problems related to the representation of women, ethnic and racial groups, and children. We’ll be particularly concerned with the way that artists across time and cultures have engaged these ethical issues.

Queer Theory is the cutting edge in contemporary social and political philosophy and gender studies. By attending to the experience and reality of non-normative sexualities and gender identities, Queer Theory attempts to produce both new concepts and new theoretical frameworks within traditional epistemology, phenomenology and political theory in order to comprehend the diversity of human experience with respect to sexuality and gender. Students in Communication Studies, English, Philosophy, Political Science, Religion, Social Work, Sociology, and WGST will find this course complimentary to their studies. This course will count toward the 300-level or higher course requirement in Philosophy. (Offered Spring 2014 and Spring 2016)

“From the ‘Gotcha!’ to Immanent Critique” in “Reflections on Pedagogy: A Symposium,” philoSOPHIA: A Journal of Continental Feminism 2(1): 2012.

Plato’s Mimetic Method is a book project arguing that Plato’s philosophical method is thoroughly mimetic, in that it imitates Socratic method, it critically appropriates the methods of philosophy’s competitors and, ultimately, provides a reflection upon Platonic method itself.

“The Psychagogic Work of Examples in Plato’s Dialectical Methodology,” being revised for publication in Philosophy and Rhetoric

“Why Does Thrasymachus Blush? Ethical Consistency in Socrates’ Refutation of Thrasymachus,” under review at Polis: The Journal for Ancient Greek Political Thought