The hardships behind the disease

Brittany Anderson ’16 started out at Luther as a pre-med major with a biology focus. To fill electives, she began taking anthropology courses and was quickly drawn to some of the questions medical anthropology was asking that biology wasn’t. 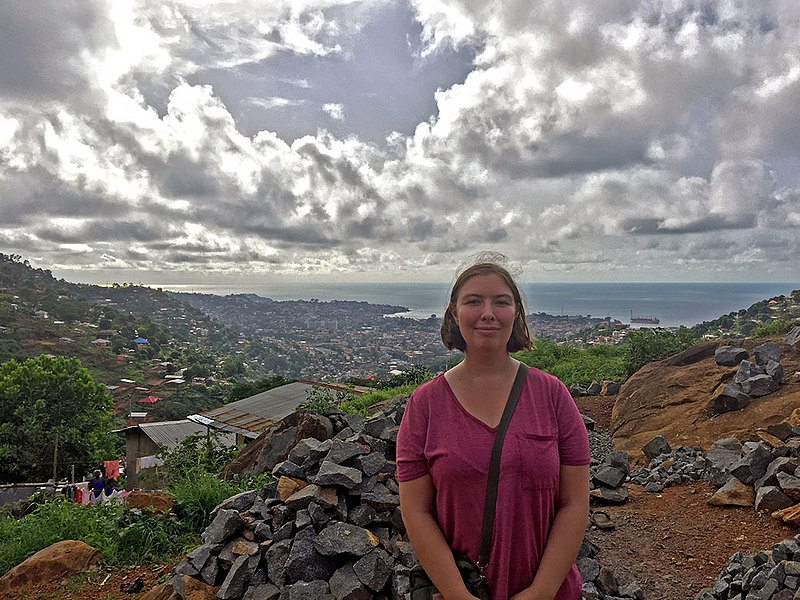 Anderson, pictured here in Freetown, Sierra Leone, in 2018, has taken several trips to the country to study the long-term social and economic impacts of the 2014–16 Ebola crisis.

“When you have doctors doing any sort of medical work, they’ll often say, ‘Patient did not comply’ or ‘Patient was lost to follow up.’ And the questions I had were: What does that mean, why is that happening, and what’s actually going on there? Those weren’t the sort of questions that biology or even a lot of the medical literature was really addressing,” Anderson says. “What’s going on in the other parts of these patients’ lives? Why are some people successful here and other people aren’t? I didn’t like that so much was written off to personal choice. That felt like it wasn’t moving anything forward.”

As a Luther student, Anderson added an anthropology major to her biology major and started pursuing the kinds of questions that mattered to her. In biology, she did an analysis of the available research on glycoproteins in Ebola, which at that point weren’t well-understood. At the same time, she wrote her anthropology senior thesis on how the 2014–16 Ebola crisis unfolded across the various regions of Sierra Leone, paying special attention to the social aspects she could glean from reports and articles that detailed timing and why the outbreak happened where it did.

These lines of inquiry would prove foundational to Anderson’s future path, as would the opportunity to be a research assistant to Maryna Bazylevych, a Luther anthropology professor. In 2015, the two women went on a three-week research trip to Ukraine during its conflict with Russia, where they interviewed students about their sense of health and risk. “In a very practical way,” Anderson says, “that gave me a lot of experience on what it’s like to be an anthropologist, what it’s like to go out into the field and do research, and whether this is something I actually want to do with my life. And in a pragmatic sense, it meant that when I applied to graduate school, I had some of that experience I could put on applications, which I think really helped to show that I could do this kind of work and be successful.”

Anderson’s research has traced a fairly linear path from Luther to her PhD candidacy in anthropology at the University of Iowa, with the social aspects of the Ebola outbreak in Sierra Leone as a throughline. During her graduate program, she spent two summers in Sierra Leone investigating the long-term implications for households placed in quarantine—sick or not, sometimes under armed guard—during the outbreak. She found a lot of economic hardship, social stigma, and emotional trauma.

Anderson was awarded a Fulbright Study/Research Award for 2019–20 to expand on this research. In February, she returned to Sierra Leone to continue tracking the long-term social and economic effects for Ebola survivors. While the COVID-19 pandemic required her return to Iowa in March, in general, she says, she’s noticed that social stigma seems to have subsided but that economic challenges remain—especially as government and nonprofit resources have dwindled.

“These individuals are really having to find their own way of getting treatment and trying to mitigate the chronic side effects of the disease,” she says. “That’s what I’m studying now: How are people making choices to pursue one treatment over another, and what goes into influencing those choices? One of the things that anthropology does really well is ask questions like: If somebody’s choosing this kind of health care, what are they giving up? What’s the trade-off for them in terms of making one choice versus another?”

Whatever the answers, Anderson wants her research to have real-world impact. “I want to make sure that whatever I do—whether it’s in the academic realm or the public sector—I’m putting something forward that will make a difference for the people I’m working with. I don’t want to write something that gets lost in an academic journal that you have to pay $40 to read. Whatever work I end up doing, I want to make sure that it’s benefiting people.”