The faith to have big dreams

“It’s okay if your path isn’t linear,” says Fabrice Musoni ’09. “In hindsight, my previous experiences helped me get where I am today”—helping children in 18 countries access education while they’re not able to gather in person. 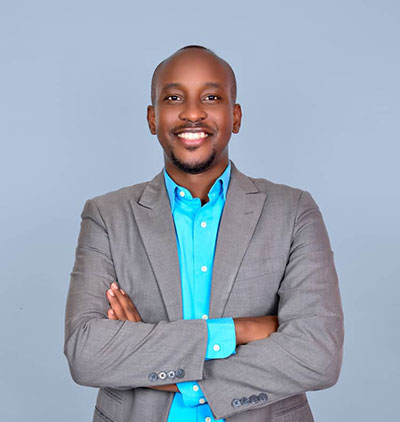 Rather than linear, Musoni’s path has been exploratory. He entered Luther thinking he’d study pre-med, but discovered he loved learning about different cultures and world history and participating in Luther’s Ethnic Arts Festival. With a newfound interest in international relations, he switched majors to communication studies and political science and earned a master of science degree in foreign service from Georgetown University.

After Georgetown, Musoni worked for an NGO, United to End Genocide. It turned out to be a great fit. “We were doing advocacy work and lobbying the State Department to try to bring about actions to end mass atrocities,” he says. “I’m from Rwanda, so that was close to my heart. I had my activist hat on, and this organization gave me the platform to try to do something about it.”

In 2013, Musoni got the chance to work for the World Bank—a dream of his since Luther—as a consultant on fragile states. He took a huge gamble to work there, trading a 401K and health insurance for a 21-day contract. Eventually the 21-day contract became 40 days, then 60 days, and soon Musoni had strung together a 13-month career at his dream job. And then he reevaluated and took another leap.

“I was reinventing myself,” he says. “I always want to explore and learn new things. That’s always been at the core of what I do.” He relocated to Senegal to work for a US-based nonprofit called Development Gateway, which uses data and technology to improve transparency around the management of foreign aid and development.

Now, two years later, Musoni works for UNICEF’s Learning Passport program, a partnership between UNICEF, Microsoft, and the University of Cambridge that allows refugee children or those displaced by conflict or disaster to access learning spaces—digital or otherwise. As the education innovations specialist on the pilot project, Musoni deployed the program in two countries—Bangladesh and Kenya—before the pandemic hit. Since COVID’s reshaped the way students learn across the world, the project’s taken on whole new levels of relevance and import.

The original idea, says Musoni, was an approach that blended traditional classrooms with digital learning—physical teaching spaces with teachers who used technology in their lessons. The plan was that the team would go on the ground, devise a recommendation strategy, train personnel, develop monitoring and evaluation frameworks, and work from a country office. But when COVID hit, refugee camps and other places became inaccessible. So they shifted focus to online learning, and now the program has responded to a global need, going from two countries to 18. “The demand was so great it was overwhelming,” Musoni says, anticipating that Learning Passport users could exceed 1 million by the end of 2021.

This experience and those that preceded it have lit a new passion for Musoni, who hopes to start his own consulting firm focused on advisory support to African governments in the areas of education, climate change, and adaptation. “That’s where I feel like I can add value to what’s been done out there,” he says.

While the plan requires a lot of knowledge and networking, Musoni, constant reinventor that he is, feels optimistic. “At Luther, I was given the environment to explore and challenge myself and to have that faith to have big dreams,” he says. “I always say, if I’ve already proven something to myself, what’s next?”