Someone who’s gone before me

Crossing the threshold from college student to full-fledged adult in the world can feel overwhelming. In the flood of coursework, activities, grad school applications, and hunting for jobs and internships, it’s easy to lose track of what gives your life meaning and purpose. Sometimes, it helps to have a guide. 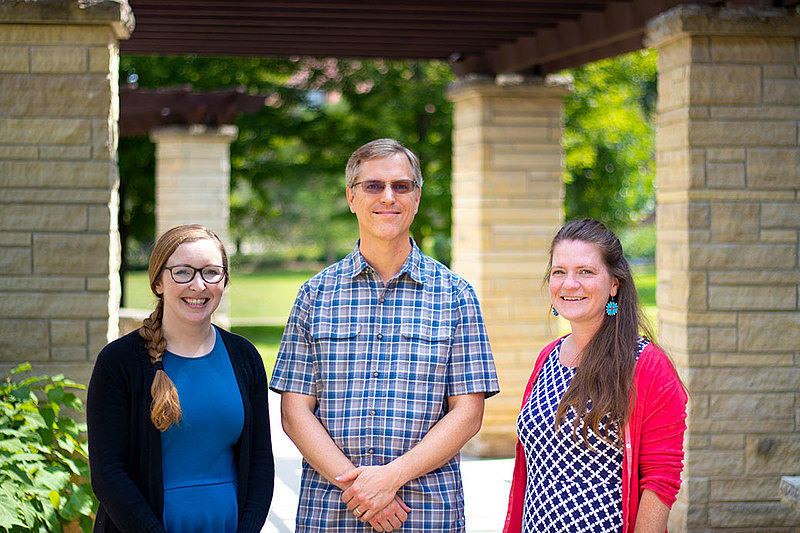 For the past few years, interested Luther students who want just such a guide can find one through Luther’s Vocation-Inspired Alumni (VIA) Mentoring Program. The program, co-directed by associate professor Rachel Brummel and associate director of alumni relations Alyssa Ritter ’11, with support from associate professor Phil Iversen ’87, pairs current Luther students with Luther alumni mentors who help those students think about their values, strengths, and ways they find meaning in life.

Mentors are trained not to focus only on careers, but also to explore with students bigger questions like who am I and how do I want to engage in the world? Where do I want to spend my time? How will I balance my values with my work? How will I build a meaningful and fulfilling life after Luther, and how might I start to cultivate those pieces now?

The program has led to a lot of deep conversation and soul searching, some connections that will likely be lifelong, and provide meaningful benefits for both mentees and mentors.

Luther’s VIA Mentoring Program has grown from 12 mentor/mentee pairs in 2019–20, to 30 pairs in 2020–21, to 50 pairs this year. Mentors so far have been drawn primarily from the Alumni Council, the Black Alumni Association, and the Latinx Alumni Group. While it’s now entirely self-sufficient, the program was funded in part in its initial years by a grant from CIC-NetVUE, the Council for Independent College’s Network for Vocation in Undergraduate Education, whose goal with the program is to embed a sense of vocation in liberal arts schools.

Mentors aren’t meant or expected to be experts. Rather, Ritter says, “It’s a great way to expand who’s in a student’s circle, who’s in their corner, who’s rooting for them along the way.” 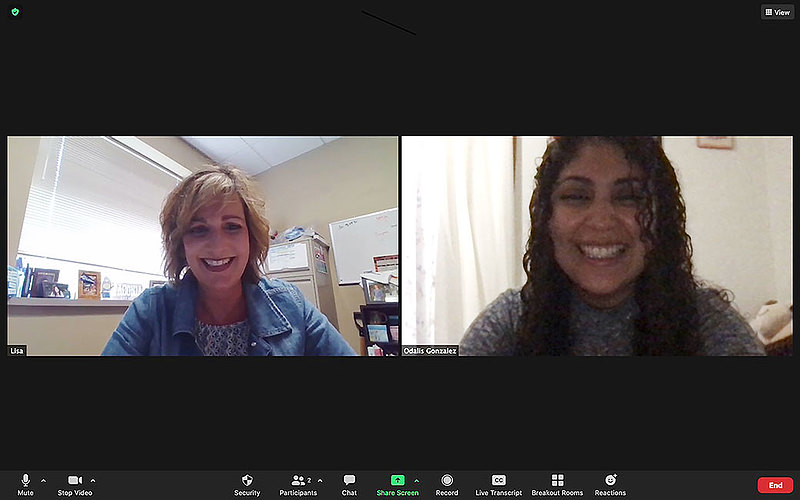 Last year, Lisa Small Steinbauer ’88, director of communications at Ridgeview Medical Center and president of the Alumni Council, mentored Odalis Gonzalez ’21. Although they come from very different backgrounds, Small Steinbauer says, “What I got out of it was pure joy—a sense of pride in having the opportunity to be a resource for Odalis and be part of her journey as she neared the end of her amazing time at Luther. I’m not her parent, I’m not her boss, I’m not her professor or roommate, but I’m someone with whom she had a shared Luther College experience, and I could be a sounding board for her. I could listen to her. She could share with me what she was feeling great about and where she was having challenges or struggles.”

Creating space to explore together

Students are nominated by faculty, staff, or fellow students, or they can self-nominate. Ultimately, the VIA Mentoring co-directors want to choose students who, Brummel says, “will most benefit and be most engaged—students for whom this could really move the needle, students who will benefit from exploration and conversation with an alum.” 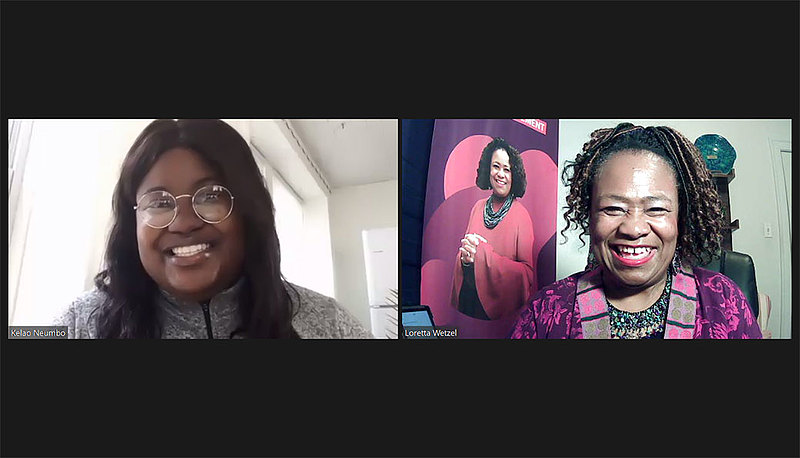 Kelao Charmaine Neumbo ’22 fit this bill exactly. “When I found out the VIA Mentoring Program was active and something I could be a part of, I was ecstatic,” she says. “It was an opportunity to gain not just advice but also guidance from someone who has lived before me and had similar experiences and similar hurdles they’ve had to face, which is always helpful when you’re younger and facing major decisions in your life.”

Neumbo was matched with  Loretta Dooley Wetzel ’80, CEO and president of the Wetzel Group in Chicago and co-president, with Perran G. Wetzel IV ’79, of the Black Alumni Association. It was clear from the beginning that the match was strong. “When Loretta and I connected at first, it felt like I knew her already,” Neumbo says. “I’m just smiling ear to ear thinking about our conversations. They’ve always been interesting, always exciting, and I never wanted to put the phone down.”

At the beginning, Wetzel says, “The only expectation I set was to add value. I wanted to go with the flow and serve. What blossomed was a beautiful lifelong relationship!”

One of the ways that Neumbo, a neuroscience and global health double major, felt especially supported by Wetzel was as she was preparing to intern at Mayo Clinic during Luther’s Rochester Semester. Going into it, Neumbo, who struggles with imposter syndrome, felt intimidated. She says, “Loretta was really monumentual in giving me advice that I deserve to be there. She instilled the notion—or the truth—that I belong at the table. Being an immigrant, being Black, and being a woman, and her also being Black and being a woman, we’re often places where you question whether you should be. She really drove into me that I deserve to be there.”

As Neumbo prepares to lead the student body as Student Senate president this year, she carries with her some of the best advice Loretta shared with her: you need to create space for others to contribute.

“I really carry that with me and think it to myself under my breath sometimes,” Neumbo says. “It doesn’t sound so impactful when you hear it the first time, but when I internalized that, I realized that when you’re in spaces where you’re able to make change—which are spaces I want to be in and often find myself in—you can’t make those changes yourself. You need to create platforms and space for others to contribute and take part—that’s how you make change.”

Sam Simataa ’13 was paired with Nyathi Motlojoa ’23. They had a lot in common from the start. Both men are from southern Africa and both played tennis at Luther. They spent time bonding over these things, often over WhatsApp but also in real life. Although there’s no expectation that mentors meet their mentees in person, Simataa, a software test engineer in Rochester, Minn., made a point of attending a couple of Motlojoa’s tennis matches, and once the duo even went snowboarding in La Crosse, Wis. Simataa picked up his mentee on campus, then drove an hour to Mount La Crosse, where COVID restrictions meant that they had to wait in line outdoors for two hours before getting into the rental building.

Simataa says, “We were laughing afterward because it was like, Wow, was that really two hours? We were talking the whole time.” 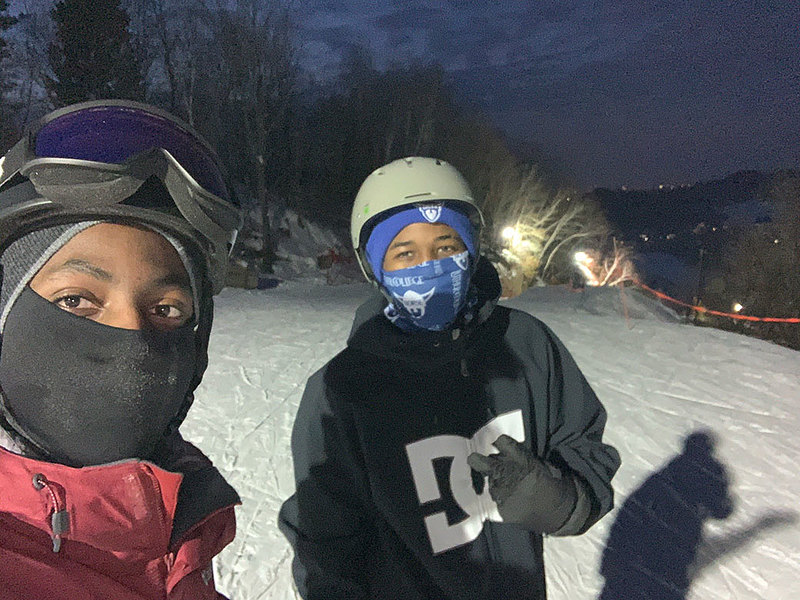 While bonding over tennis, the international-student experience, and their home countries was natural and easy, the pair also dug deeper, talking about possible futures.

“This relationship helped me see what life is like for someone who’s from the same region of the world as I am living in the United States,” Motlojoa says. “It is, in a way, a glance into what the future holds or what the future could be like for me.”

In a neat kind of alumni chain, with mentors going forward and backward, Simataa actually had a similar experience when he engaged in monthly check-ins with other VIA mentors, where they shared their experiences and offered tips and support to one another.

“Just as Nyathi is kind of living a life very similar to what I thought my Luther experience was,” he says, “I got to meet some people who I thought I lived their Luther experience. So it was interesting to hear from them and what they did in life, and I learned a few things that I can add to my life too.”

Small Steinbauer also found the mentor group check-ins invaluable. “I wasn’t expecting to meet and start to build at least virtual relationships with a whole other set of Luther alums who I never would have met,” she says. “Logging in and seeing people from different parts of the world and knowing that the Luther experience—whether it was great, good, indifferent, whatever—was the common denominator was really cool. That was another unexpected, unintended benefit.”

While the VIA Mentoring Program is designed to support students, mentors also benefit. Simataa, who graduated from Luther eight years ago, says, “Once you start working, you love the non-homework life, and you can kind of do things on your own terms. But having a mentee taught me about accountability and consistency again. In work, that’s required, but in my outside life, I needed to make sure I was available and accountable to my mentee. You want to support them but not direct everything they do, so striking that balance of being open and honest but also being supportive and understanding—that’s something I kept balancing and learning about myself and our relationship.”

Marlon Henriquez ’15, an instructional coach  at Pilsen Community Academy in Chicago, mentored Jon Rivera ’21. They share similar backgrounds as first-generation Hispanic college students, and Rivera grew up in Chicago, where Henriquez now lives. While these things offered great points of connection at first, Henriquez says, “Eventually, our conversations really focused on career aspirations for both of us.” 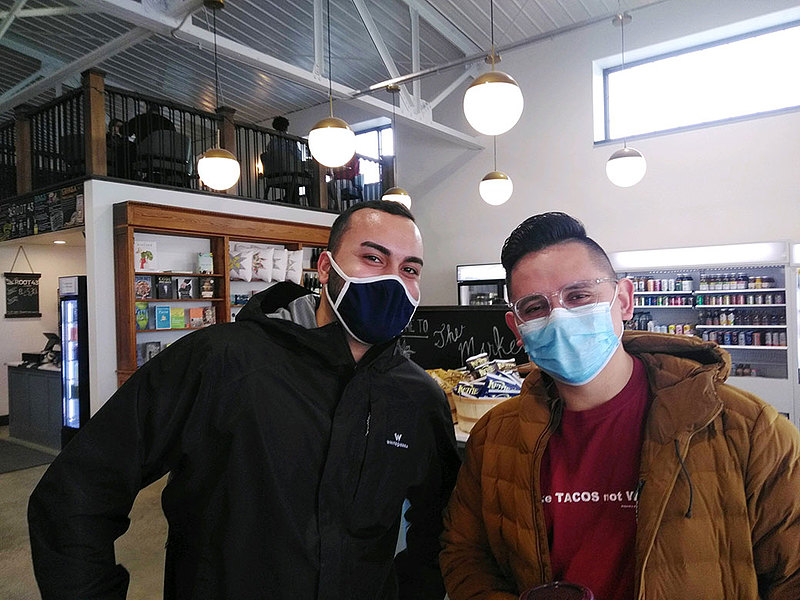 Henriquez and Rivera met twice in the past year, once at Decorah’s Landing Market, where they talked for hours, and another time for ice cream at the Sugar Bowl. “Although I was supposed to be the ‘mentor,’ I got just as much as Jon did out of this experience, if not more. Jon asked so many good questions about my own career aspirations that helped me affirm my goals,” Henriquez says. “We have truly become support systems for each other.”

To learn more about the VIA Mentoring Program, contact Alyssa Ritter, alyssa.ritter@luther.edu, or Rachel Brummel, brumra02@luther.edu, or read a reflection Ritter and Brummel wrote for Luther’s Ideas and Creations blog.