When Luther cleared out campus in March in response to COVID-19, many international students were unable to return to their home countries or find housing with stateside friends or relatives. So Amy Webber of Luther’s Center for Intercultural Engagement and Student Success put out a call for local families that might shelter these students, and the Decorah community responded in a big way. Two dozen host families stepped up to provide homes for nearly three dozen students during a global pandemic.

During a time when many of us felt our worlds shrink after weeks and then months hemmed in by four walls, these newly minted families felt their horizons grow through cultural exchange, good conversation, and the pleasure of getting to know someone new.

It’s one thing to host a stranger in your home. It’s quite another to host a stranger in your home for an indefinite period during a global pandemic when you’re generally not supposed to leave your house. With so much unknown about COVID-19 transmission, the length of its incubation period, how long people remain contagious, and what it means to safely distance from others, it’s easy to view the outside world—and the people in it—with fear and suspicion. So why risk bringing another unknown—like a long-term guest you haven’t met—into your house?

John Kraus and Lauren Bonney are newish parents to three-year-old Juniper and one-year-old Sylvan. Lauren says, “We were definitely looking at the situation through the lens of being parents and thinking about the people at Luther as kids—they’re somebody’s kids, and we need to make sure that they’re safe and taken care of in a really uncertain time. We had space, and it wasn’t really a question. We got the email and we basically looked at each other and were like, Well, yeah, we’re doing this. Of course we are. We have space, we have stability in terms of access to food, so we should share that.” 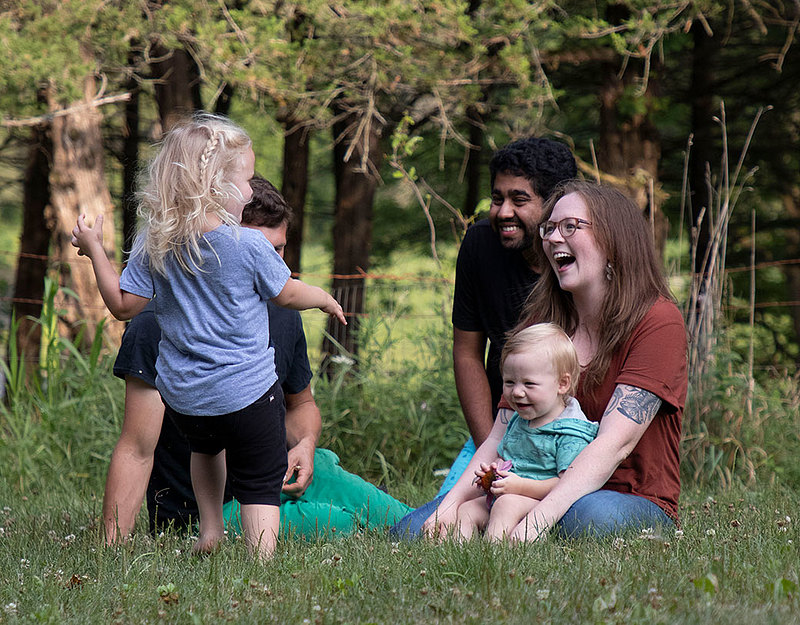 Lisa and Steve Zittergruen share a similar commitment to hospitality. They decided to take in not one but two students, Juni Deshar ’22 and Vanu Nagarwalla ’21, and this was in part for the social benefits. Steve, a full-time homemaker, says, “As an extrovert, part of me was just really terrified about the idea of quarantine with my children all day every day, not seeing any people but my family. So the idea of temporarily growing our household size and adding two more people who are interesting to talk to sounded like a great move. And it turned out that way.”

Of course, students and host families checked in about shared safety values right off the bat. Phil ’87 and Sarah (Henning) Iversen ’87 hosted a junior, Firdavs Atabaev ’22. Phil remembers picking him up: “He reached out to shake my hand, and I declined. And I had hand sanitizer and I asked him to use it when we got in the car. I also asked him to keep some of his luggage in the car for a few days that he didn’t need right away. And he agreed to all of that. We just kind of broached it in real time, and it turned out he was very amenable to our way of being safe.” 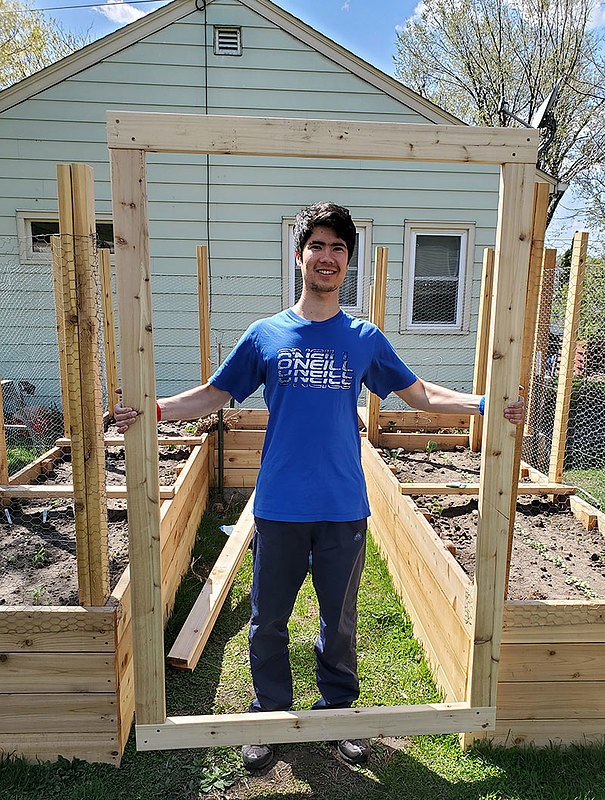 Lisa, who hosted Juni and Vanu, says, “For the first several days, none of us knew if the other people were a carrier for the virus or not. So we were especially careful with the idea of hand washing and hygiene and things, and we have continued to be cautious,” especially since Lisa works as a physician at Winneshiek Medical Center. The first night Juni and Vanu joined the family, Steve says, “We talked about quarantine rules and about how important it was that if we were doing something that was troublesome to them to let us know, and that we would share things we wanted done differently as well.”

This open dialogue about safety measures was typical among the new households. Lauren says, “We’ve been having ongoing conversations about what it means to be safe in our interactions with the public and then coming home, because it’s an evolving situation as we find out more information and learn how to manage our risk. We just have to keep talking about those things and give each other the opportunity to say, I’m not comfortable or That makes sense, that sounds good.”

While the risks of growing your household—for both hosts and students alike—are many, what about the rewards?

Tanuj Guha ’23, who goes by Rick, was delighted at his placement with John and Lauren, who live on a farm seven miles northeast of Decorah. “I couldn’t imagine having as much access to the woods, to the river, to an incline or bluff in any other situation living anywhere else in Decorah, even at Luther,” he says. As a philosophy and computer science double major, he’s valued the opportunity to sift through ideas as he takes long walks around the property. 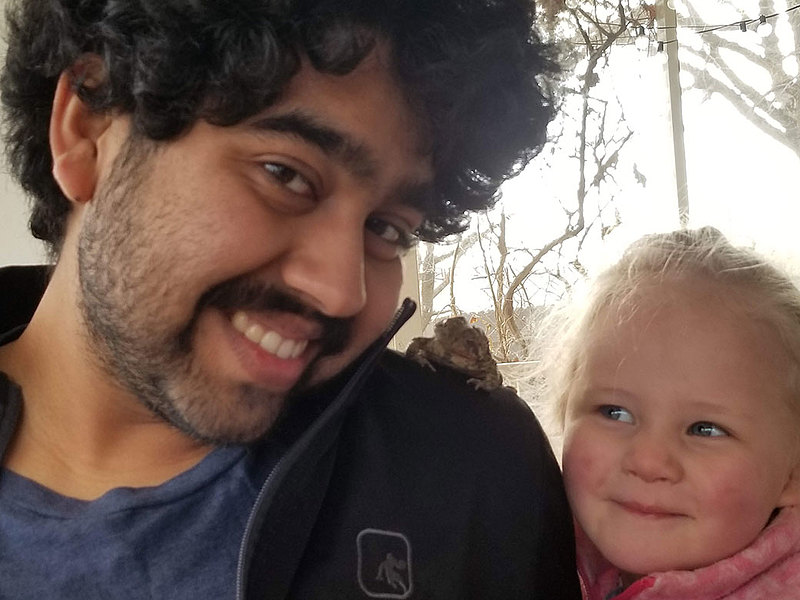 Rick made fast friends with his new family, including three-year-old Juniper (right). Asked whether he was nervous about living closely with a group of strangers, Rick says, “Once I got here, I had no doubts whatsoever.”

He’s also loved interacting with Juniper and Sylvan, who clearly love him too. And, Lauren says, it’s been a hopeful feeling watching the kids interact with Rick during a time when their access to other friends and family is so limited.

Juni was also really excited at the prospect of living with a family with children. “I didn’t grow up with younger siblings—I was the youngest. But I always loved kids, so I really wanted a family where they had kids. Or pets. Or both,” she smiles.

Steve, who is father to four-year-old Vera and seven-year-old Soren, says, “It’s been really nice that if I’m frenetic or having a hard day, either Vanu or Juni will let Vera crawl into her lap and read a book or practice ukulele with the kids. They’re gentle and patient and kind and have appropriate boundaries. It’s just really nice to trust them, and we do. They deserve our trust. It’s been great.” 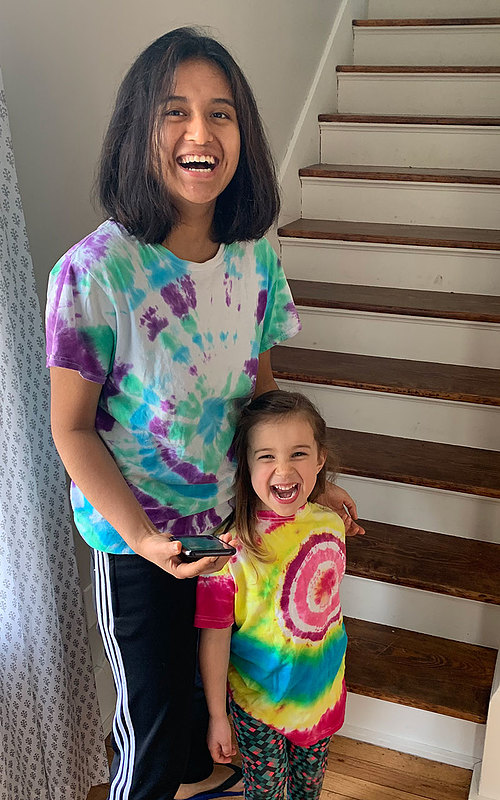 Juni Deshar ’22, pictured here with four-year-old Vera Zittergruen, didn’t grow up with younger siblings and was excited to spend the past several months living with a young family. “I always love being in a family environment,” she says.

In addition to the fun of living with kids, Vanu notes that during a pretty atypical semester, “The family feeling gives you a lot more routine. The whole family, including Juni, was very helpful in keeping the semester feeling like a semester.”

Firdavs says that he learned a lot through the way the Iversens live their ethics, like donating to those in need and shopping in the local economy. And as a student who hasn’t declared a major yet, he started to hone in on some career possibilities through talking to Sarah, who co-owns Blue Heron Knittery in Decorah, and especially Phil, a current Luther math faculty member and former senior research advisor and statistician at Eli Lilly.

“Talking with him and listening to his experience, I really started seeing the value of making sense out of data. He had a good influence in that way,” Firdavs says.

Rick, too, gained a lot through conversation with John, a natural resource technician with Winneshiek County Conservation, and Lauren, a freelance illustrator. “Both Lauren and John are very passionate about the things that they do. It’s really a template for me to gauge what I want to do with my life,” he says.

He also found fellowship with Lauren, whose parents live ten hours away by car, over being apart from family during a stressful time. “It doesn’t matter if one’s family is 10 hours away by car or 24 hours by flight,” Rick says. “What it means is that ultimately we’re not with them, and we have to process that.”

Whoever you are and wherever you come from, food is important. Cultures around the world celebrate and grieve with it, and during this pandemic, it’s become even more significant to many of us.

“Meals have been so central to our relationship,” Steve says. Every day around 4:30, after finishing their studies, he says, “Juni and Vanu come down, and we cook and laugh together for a good hour. And we make really delicious foods.” 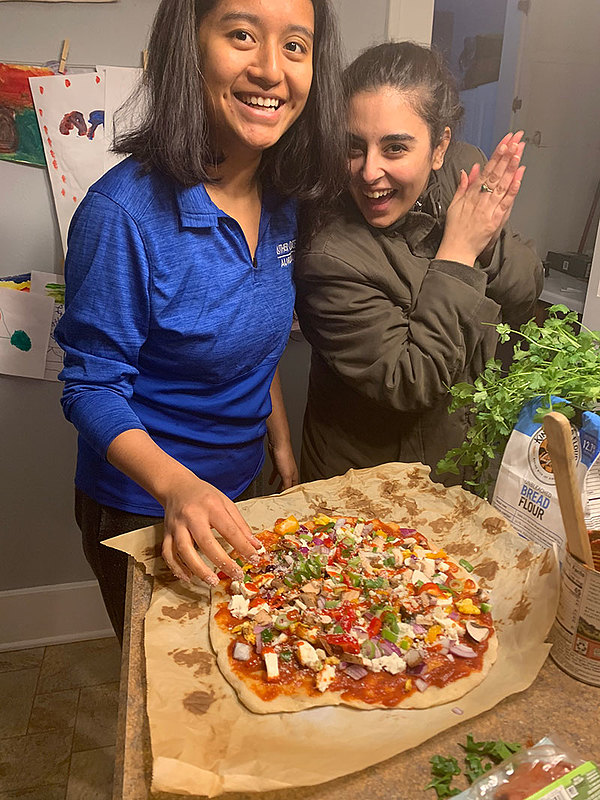 “It’s like restaurant food every night,” Juni says. “And it’s always interesting to have different conversations at the table. We talk about all kinds of things from our home countries or from here. We talk about everything.”

Steve says, “One of the tragedies of coronavirus is that there’s so little to look forward to and so little that changes. So to build a new relationship around the dinner table night by night is its own kind of exploration. As we cancel vacations, at least we can ask each other about contexts and cultures and homelands. It’s been kind of exciting.”

As a resident assistant who goes above and beyond, Vanu is used to cooking for her 43 residents. At the Zittergruens’, about once a week, she and Juni happily prepared food from their respective homelands of India and Nepal.

“The culture exchange has certainly gone both ways,” Steve says. “They’ve learned from me about cooking, but I’ve learned a great deal from them about cooking as well. They’ve made us wonderful Nepalese and Indian cuisine from scratch. I tell Lisa every time, We ate the best meal in Decorah tonight.”

At the Iversens’, Sarah learned how to make naan that, Firdavs says, tastes like the kind he eats back home in Tajikistan. And over dinner, the family enjoyed good conversation about everything from physics experiments to the stock market to pharmaceutical manufacturing to whether future robots will be able to read minds. 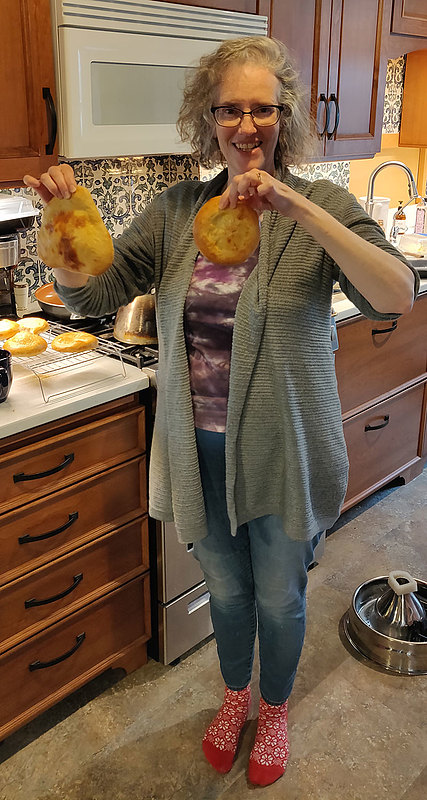 This spring, in order to help Firdavs feel more at home, Sarah (Henning) Iversen ’87 learned how to make naan that, Firdavs says, tastes like the kind from his home country of Tajikistan.

“A lot of questions he asked were really good questions,” says Phil. “They really made me stop and think, and I learned a lot from that too.”

“We told Juni that it’s her choice, obviously, but we also told her that our preference would be that she stay here if she wanted to, and it seems like she does, so we’re glad,” Steve says. “When we signed up for this, we didn’t know if taking students in would be better or worse. It turned out to be so much better.”

During a quarantine, when it feels like so much is closing down and closing in, the value of feeling like something is opening up—a new friendship, a cultural awareness, a homegrown palate—cannot be understated.

“This is someone we’re getting to know for the first time, and we had this leap of faith together. It has felt very hopeful,” Lauren says. “Rick’s being here has helped us continue to have a sense of being connected to a community that otherwise we would have lost during this time.”

And that’s really the gift that three dozen Luther students and two dozen Decorah-area families gave each other during this part of the pandemic: the feeling that their community—and their world—is growing bigger rather than smaller.