Prepared to make an impact

Each year, Luther is fortunate to graduate so many incredible seniors. This year is no exception. The five new graduates we profile here are motivated by social justice, intellectual curiosity, inclusivity, and building better communities through dialogue. They recognize the flaws in our societal structures and want to help repair them. They’re eager to use their strengths and interests in ways that benefit the world.

Like all of us, these seniors and their classmates face an uncertain future. But it should give us all some hope that we’re sending students like these out into the world. They’re equipped to help solve problems, discover new knowledge, address inequities, start conversations, and build relationships that will make the world a better place for all.

A leader equips fellow students with tools to change the world

A religion and political science major, Asha Aden describes herself as “interested in anything that betters the world. Racial justice and religious freedom are at the forefront for me, but all the social justices are connected—so when you’re working for one, you’re inherently working for others.” 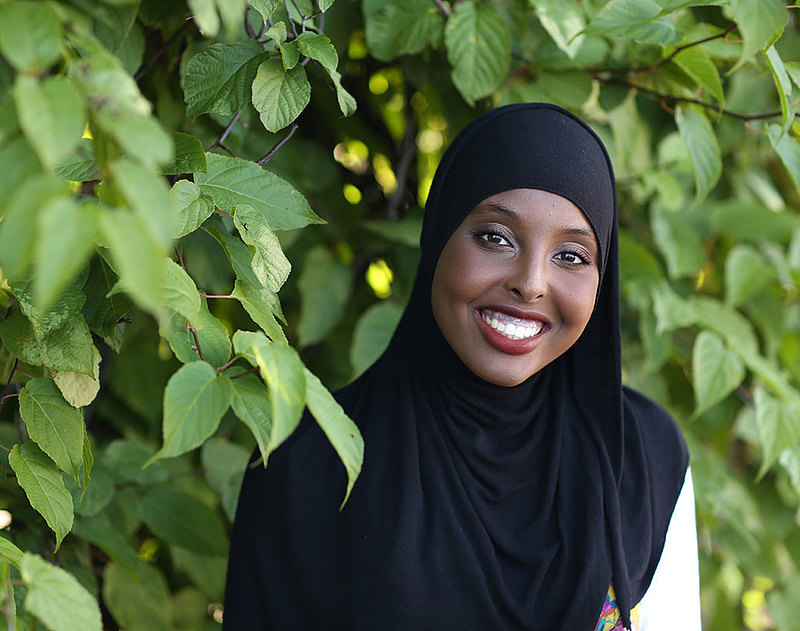 Aden engaged these interests at Luther by bringing people together in dialogue. As president of Interfaith in Action, she made a welcoming space for all. “Luther is a very religiously diverse school, and nobody really talks about that,” she says. “My focus was on bringing together all these faiths—as well as agnostic and atheist people—to talk about current issues that impact all of us.”

She also worked to include as many people as possible in the Black Student Union (BSU), for which she served as president for two years. After noticing that Black membership was limited to mostly African American students, she made an effort to reach out to African students too. She saw membership flourish as a result. “I want there to be a space for Black students on campus to just breathe, and I know BSU can be that space for them,” she says.

Aden grew up in California and in Rochester, Minn., as the daughter of Somalian refugees. During the Syrian refugee crisis, she was bothered by the dehumanization of refugees and wanted to help shift perception by humanizing the refugee experience. Working with a professor, she co-delivered a 2018 Paideia Texts and Issues lecture—a rarity for a student—about her experience growing up in a refugee community in America.

Aden was also a familiar face as a student worker in Luther’s Center for Intercultural Engagement and Student Success, which she says helped immensely with her intercultural competency and dialogue skills.

“Luther grads have a great impact on the world,” she says. “I think it’s critical that we start here, at Luther, by having these dialogues and developing the tools to have difficult discussions to make the world a better place. Because if we can start it at Luther, we can continue it anywhere in the world we end up.”

Anila Bano is positive, reflective, and curious. “Anything I do begs the question: What am I learning?” she says. “I’m very fortunate to get opportunities that many people don’t have. So the maximizer in me thinks: How can I maximize learning from these opportunities?” This life philosophy—and the instrinsic drive to help others—has driven her broad involvement on the Luther campus. 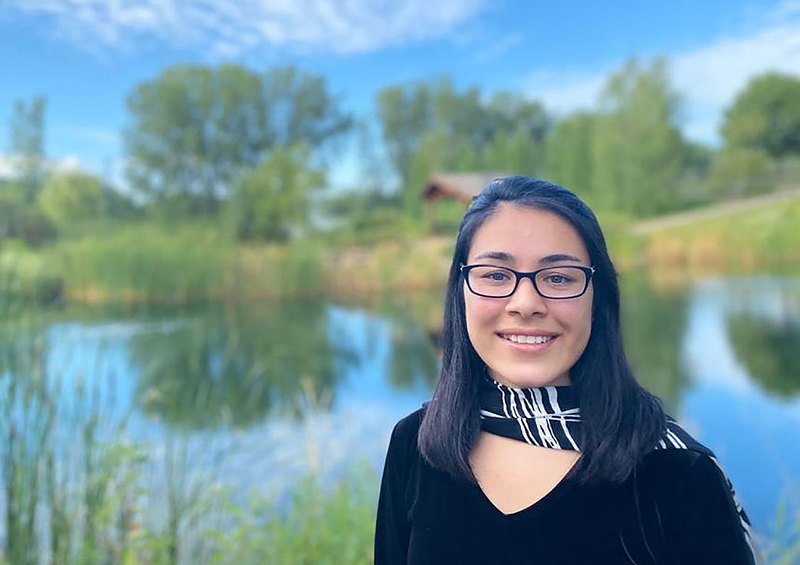 Bano was born in Gilgit, a mountainous region of Pakistan. Reflecting on her childhood, she says,“I used to wonder: What would it be like to go on top of the mountain and look at the other side?” This curiosity led her to a United World College in Hong Kong and eventually to Luther, where she majored in biology and psychology.

Bano pursued opportunities to learn more deeply in her majors. She worked as a lecture and lab assistant in the Biology Department and the Hoslett Museum of Natural History and conducted research in the college’s Laboratory for the Investigation of Mind, Body, and Spirit.

She also made an effort to learn and grow outside of her science-based majors. “Science has a special place in my heart—it always will,” she says, “but the arts and humanities at Luther made me realize that science can only be strengthened if combined with humanities and art.”

During her time at Luther, Bano contributed a lot to campus and community life. She delivered a talk on climate change at Luther’s first TEDx conference. She was a resident assistant, an outreach student for Land Stewardship, the VP of fellowship in Luther’s service fraternity, a liaison in Student Senate, and she served on Luther’s Hearing Board. It’s little wonder she received Luther’s 2019 Krahn Family Student Life Service Award.

But amid the bustle of involvement, Bano found time for deep contemplation, including about how she sees her place in the world. “I don’t think only about what I want,” she says. “It’s more: What does the world need? And then looking at myself and thinking: Do I have skills and abilities and strengths to contribute to that?”

This fall, Bano starts a full-time position with the NeuroGOAL Lab at the University of Minnesota, where she’ll be researching individual differences in neurodynamics generated during decision-making.

Colin Weber came to Luther with a love for running, making music, and following his curiosity. These broad interests and an open-minded approach to learning led him to a double major in math and physics and a minor in Norwegian; a four-year involvement on the track and cross-country teams; and roles as ensemble officer and lead trumpet player in Luther’s Jazz Orchestra. 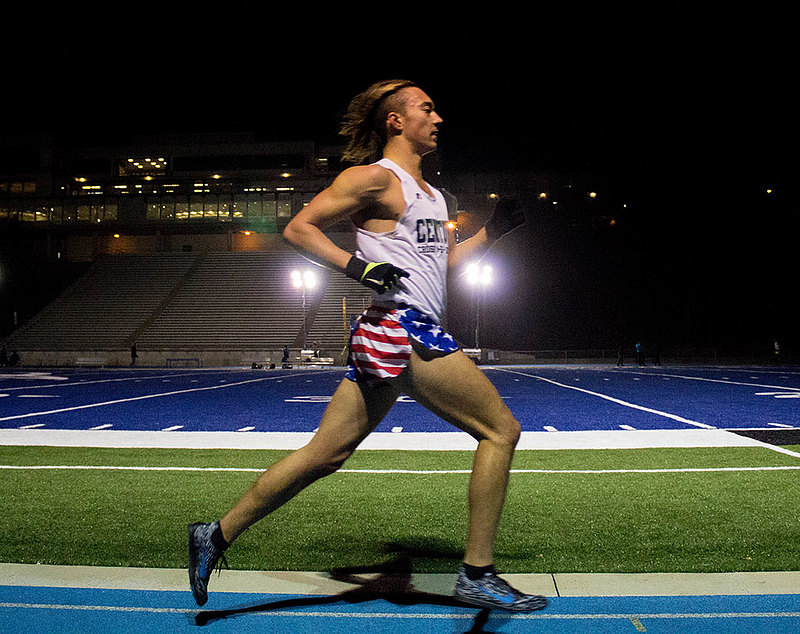 Weber fell in love with physics from his first high school physics class. “I’m curious about the natural world, understanding how things work and how things are made up,” he says. But at Luther he learned that “being a scientist isn’t just about studying the natural world; it’s also answering questions through observation and experimentation.”

Weber researched binary stars with professor Jeff Wilkerson at Luther. He interned at Maritime Applied Physics Corporation in Maine and at a startup in LA working to commercialize a Hyperloop. Last year, he received the Thomas D. Rossing Scholarship for Physics Education (ELCA), which recognizes physics students of exceptional merit.

While Weber’s physics experience runs deep, athletics and music have been equally important to his growth at Luther. Through athletics, he says, he’s learned valuable lessons about putting in the time and effort to achieve goals. “I carry over that process of goal-setting into other aspects of my life, and it’s been equally rewarding,” he says.

Through music, he’s experienced sublime moments of creating something magical—for example at a Jazz Orchestra concert on the eve of a snowstorm in Spencer, Iowa, when the band played especially emotionally. He says, “I remember looking at everyone in the trumpet section, everyone in the band, and nodding: Wow, we created something special here individually, among ourselves, and among the audience. The idea that this is possible and can be possible in other aspects of life too has kept me playing music and kept me learning from my experiences in music.”

Weber spent the summer working for Green Iowa AmeriCorps. Ultimately, he says, “I want to go to grad school and study cosmology so that I can learn more about physics, create new knowledge through research, and distribute it through teaching.”

A bridge-builder pursues an advanced degree in conflict resolution

Kristen Hansen, a women and gender studies (WGST) major with minors in English and Africana studies, has a passion for building relationships to help move communities forward. From her scholarship to her extracurricular activities, her dedication to dialogue and community-building has shaped her college years. 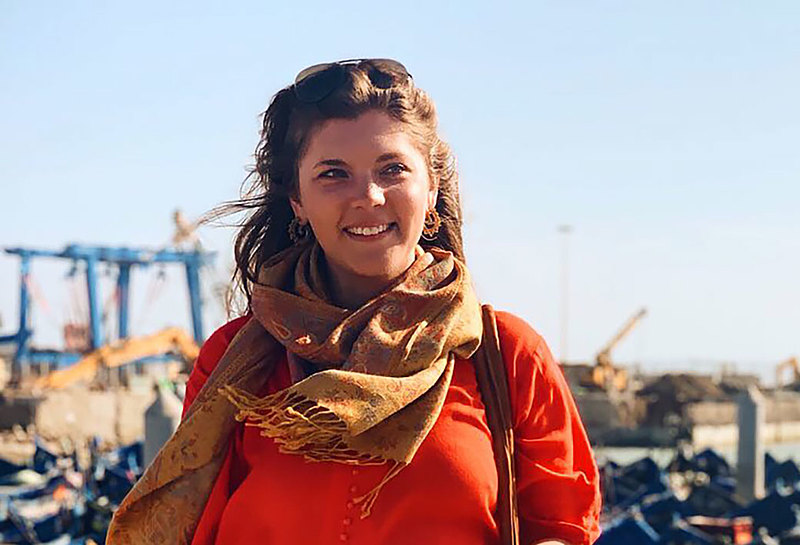 A transfer student from DePaul University in Chicago, Hansen has had a rich academic life at Luther. She found mentors across departments, from WGST to music to Africana studies. She was a 2019 Peace Scholar and a Fulbright semifinalist. She has studied and written in depth about women’s rights nonprofits in Rochester, Minn., and in Morocco. “While both research projects were big,” she says, “they weren’t more than I could handle. It gave me confidence that I could put together a project and execute it well.”

She put some of these executive skills to good use through vice presidencies in two student groups—the Disabled Student Alliance and Interfaith in Action—and as social media coordinator for the Black Student Union. Her involvement in these activities stems from a desire to amplify underrepresented voices, spread awareness, and help people feel less isolated—in part through sharing experiences.

Hansen puts a lot of stock in dialogue, which she believes has the power to conquer an “us” versus “them” mentality. It’s part of what’s driven her decision to pursue a master’s degree in conflict resolution and reconciliation at Trinity College Dublin in 2021. She says, “I’m excited about this program specifically because it takes a very dynamic approach, with a classroom and a field component in which students work with organizations that address the Troubles,” a thirty-year violent conflict in Northern Ireland.

“I feel strongly that peacebuilding and dialogue are tools that can reach across socially constructed and geographic boundaries,” she says, “and I want to devote my life to the practice of peaceful relationship-building within and between communities.”

Emily Stifter loves the French language, and she loves making music. Throughout her time at Luther, these twin loves—and her warm and friendly personality—have led her to create spaces that welcome and value others. 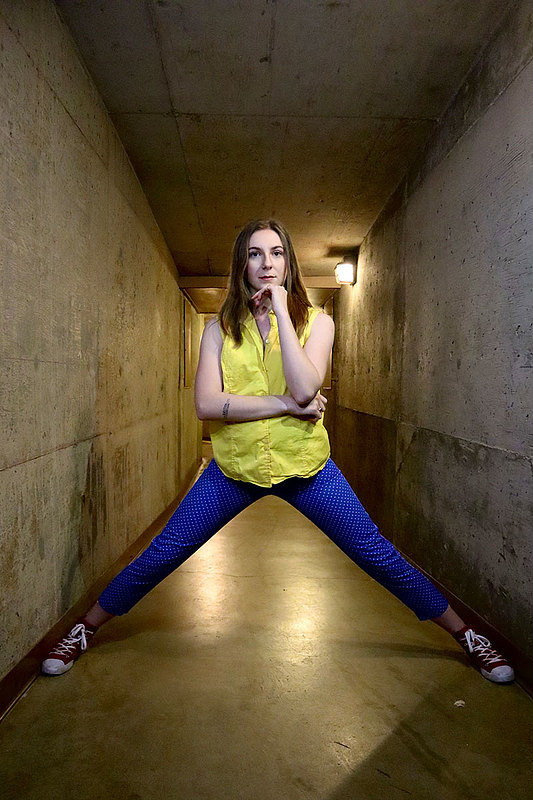 As a leader in the horn section of Concert Band and co-president of Collegiate Chorale, Stifter strived to make everyone feel valued. “I wanted every single person to feel included and like they have a space in the ensemble,” she says. Regardless of whether her peers plan to pursue music professionally, she says, “I tried to make it a home for everyone.”

As a Residence Life worker in Olson Hall for three years, Stifter helped make a literal home for her fellow students. Simultaneously, she worked her entire time at Luther for the Facilities Office, under administrative assistant Megan (Arneson) Sherman ’09. ‘’She’s basically one of the second, third, or fourth moms I gathered on campus,” Stifter says.

Stifter makes friends wherever she goes, and the goodwill she cultivated at Luther helped sustain her. “The community was the best thing about Luther,” she says. “Friends and fellow students were always there for me. And I never had an interaction with a professor where they weren’t willing to help. With the Decorah community too—the people who showed up to concerts or lectures or about social justice issues—it was very clear that they were invested in Luther.”

Stifter’s drive toward inclusivity extends to her scholarship. The theme of her senior recital (and the name of the piece she composed for it) was Underground, inspired by French composers who, she says, have been overlooked because of age or gender or other factors.

Stifter’s been offered a job teaching English to university students in Brest, France, starting in September, though travel bans may delay her start. Her ultimate goal? “I’d love to find a way to connect French, Francophone culture, music, horn, composition, and minority composers—female and other composers who aren’t played or performed or studied nearly enough. My dream job would be to combine all of that into one thing,” she says.

Given her track record of bringing people together, she stands a great chance.