The image above was taken by allied health sciences major Isaac Woods '22 during the Paideia 450 course Practicing Embodiment in Costa Rica. The beautiful sunset on Manuel Antonio Beach inspired him to catch this moment with newfound friends. 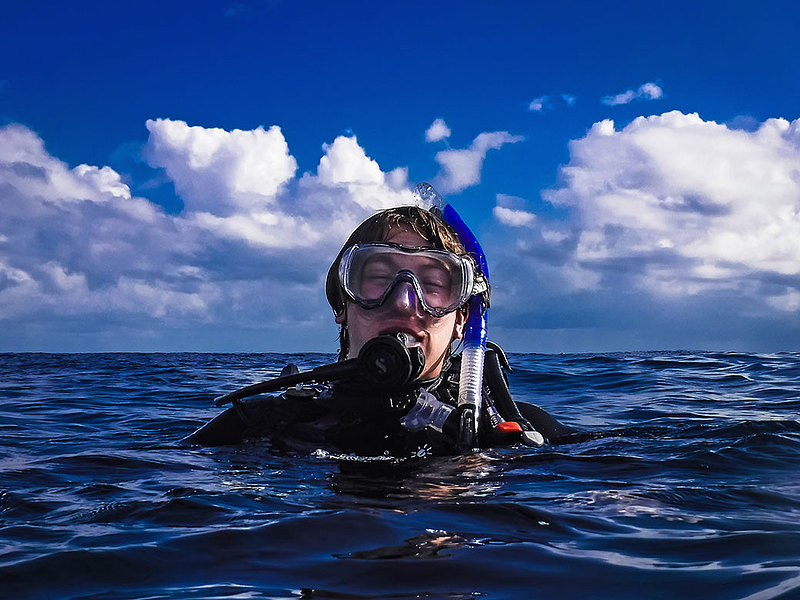 Daniel Benoit ’23, who participated in a Luther J-term course, Roatán: Ethical Engagement in a Changing World, submitted this photo of himself surfacing after a dive. He says, “My friend, Steven Conradt ’23, took this picture of me because I was so happy that the sun came out. We had started the dive about 45 minutes earlier and it was raining when we entered the water, but during that time the rain had stopped and gave way to the bright blue Honduran sky. This picture really sums up the post-dive feeling when you’re happy to be back in the sun and now you can all talk about the cool things you saw underwater.” 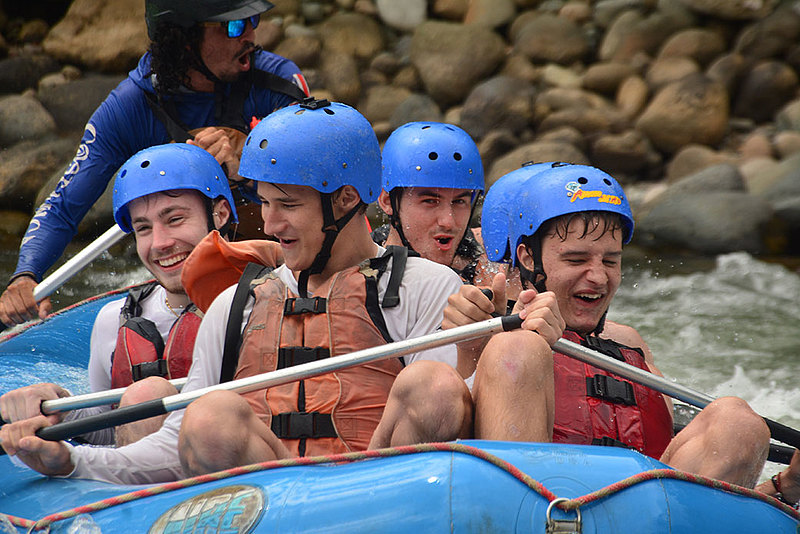 Isaac Woods ’22 sent us this photo of a whitewater rafting experience in Costa Rica. Pictured are Willem Hawley ’24, Rye Hawley ’22, Isaac Woods ’22, Andrew Kozelka ’22, Lars Marquardt ’23, and guide extraordinaire Cristobal. About his program, Paideia 450: Practicing Embodiment in Costa Rica, Isaac says, “One of the biggest takeaways for me was how I am going to continue practicing my spirituality and religion.” He was also “excited about the new friendships I made and the old friendships that I strengthened.” 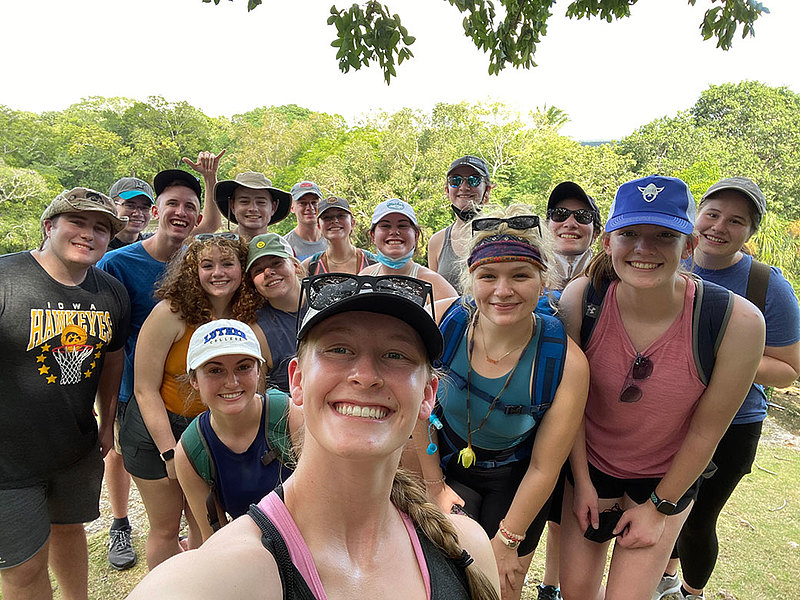 Janet Borchardt ’24 took this group selfie on top of a Mayan temple at Lamanai during her J-term, Communication Studies 239: Environmental Communication in Belize. What struck her most deeply about the trip, she says, is “the passion and pride Belizians have for their country and the environment. We saw time and time again just how willing many citizens were to go out of their way and make personal sacrifices to protect and restore their environment, which is what makes the country so special and beautiful.” 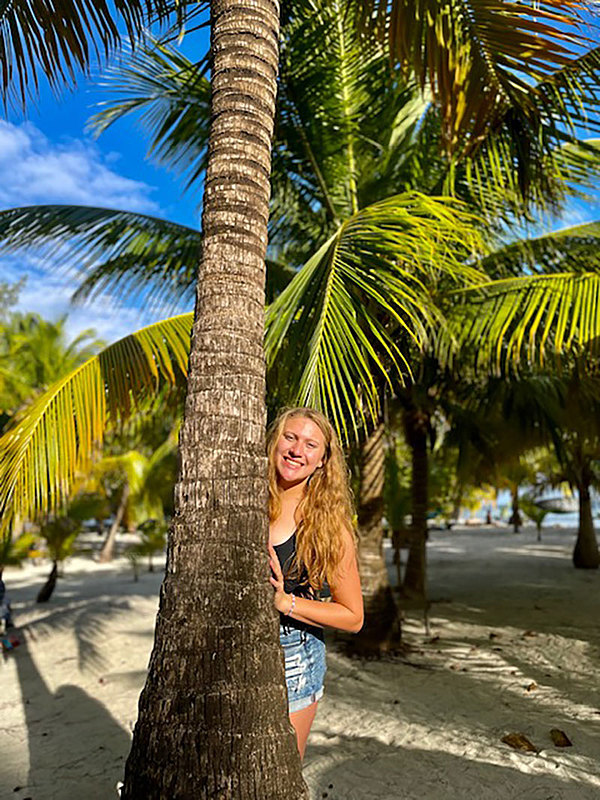 Allied health sciences major Abigail Slininger ’24 spent J-term in Roatán. “This trip allowed me to use my Spanish skills to engage in the community and provide better care at Clinica Esperanza,” she says. “Doing a daily internship at the local clinic allowed for many new and unusual experiences including performing a pap smear, doing an ultrasound, and running triage with another nurse. Another unique experience this trip allowed me to have was the chance to get scuba certified, a dream I have always had!” In this photo, snapped by Johanna Muenkel ’24, Abigail’s enjoying a beach day on a key off of the island of Utila, Honduras. 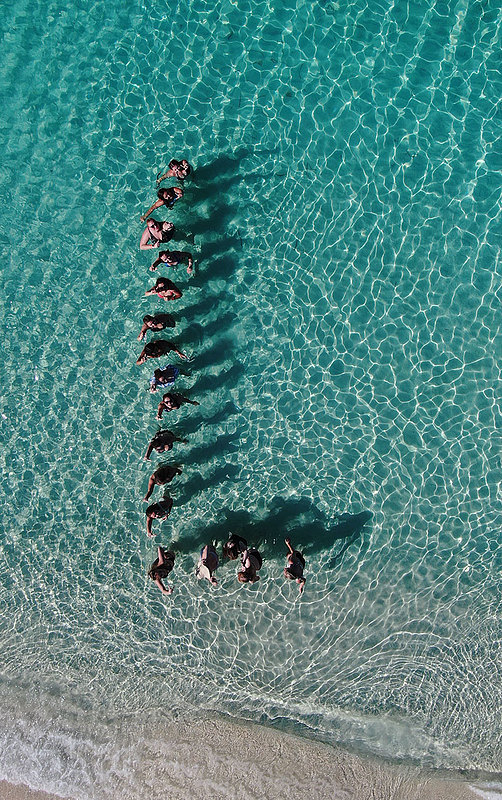 Natalie Neff ’24, a neuroscience and Spanish double major, spent J-term in the Dominican Republic for Luther’s Spanish Speaking for Medical Professionals course. On the trip, she says, “We learned anatomy and basic medical terms in Spanish, how to communicate fluently in Spanish with local people, and what culture is like in the Dominican Republic. We shared laughs, food, drinks, and made a lot of great memories on a once-in-a-lifetime trip.” Her program teamed up with students from Luther’s J-term on Dominican Republic culture to construct a giant L for Luther at a remote beach accessible only by boat (the photo was taken by drone). 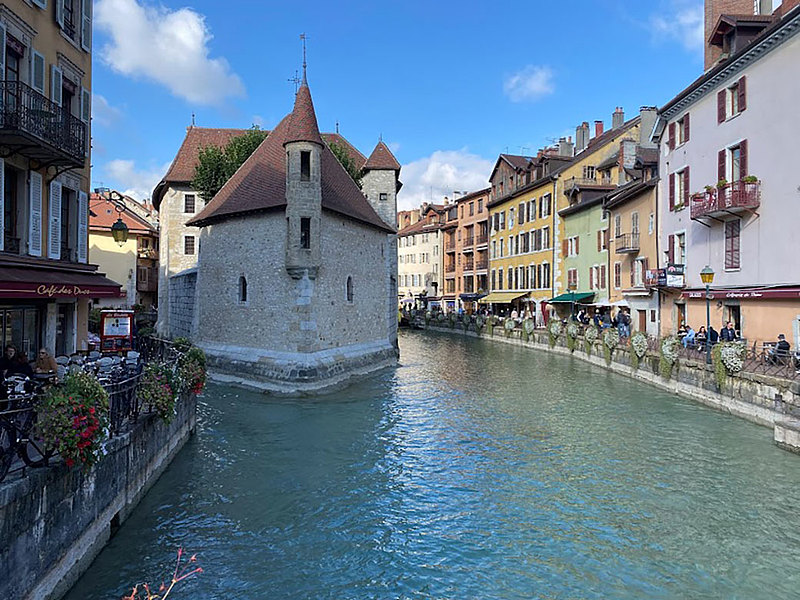 Riley Taylor ’22 took this photo in Annecy during an API semester in France. “We got to dine on a bridge of the canal while admiring the old architecture and the pastel houses surrounding us,” she says. Being able to communicate in French was a highlight of her trip. It was, she says, “an extraordinary experience to be able to better understand French culture and the national pride so many French people feel for their country.” 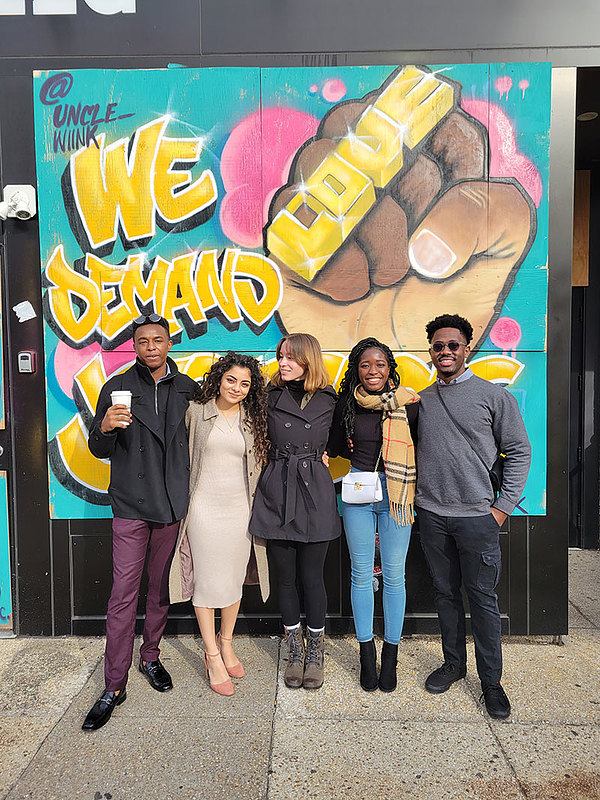 Alice Odame ’22, an international studies and economics double major, participated in Luther’s Washington Semester. “This was our first group outing after our two-week quarantine,” she says. “We spent the day exploring the Adams Morgan neighborhood,” famed for its murals and street art. 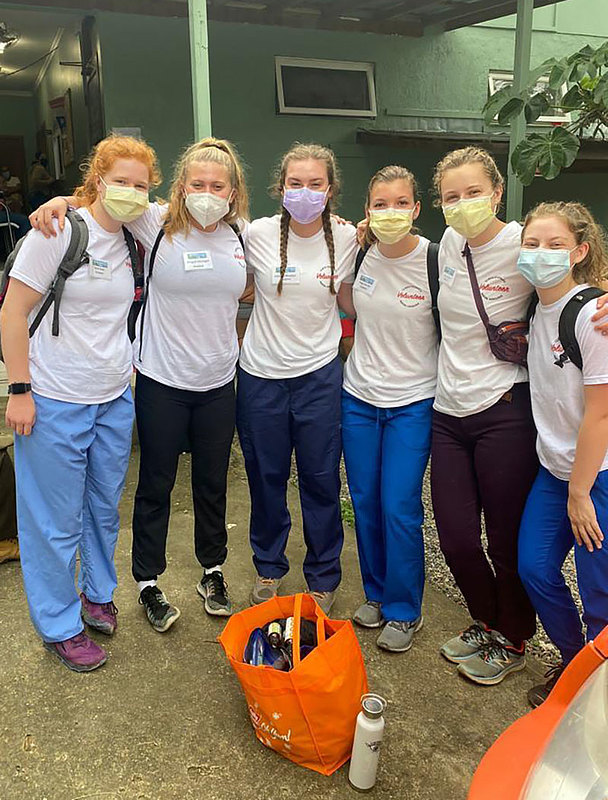 Nursing major Paige Zaruba ’23 spent J-term on Luther’s Roatán: Ethical Engagement in a Changing World course. What she valued most, she says, were the interactions with people the Luther students worked with through their internships. “We worked through language barriers and limited supplies to provide healthcare for people living in underserved villages, quite literally at the top of a mountain,” she says. “We built such strong connections with the individuals who we served, and seeing our impact in their communities to improve overall health of the population was really special!” In this photo, Luther students gather at Clinica Esperanza, a free clinic for the people of Roatán. 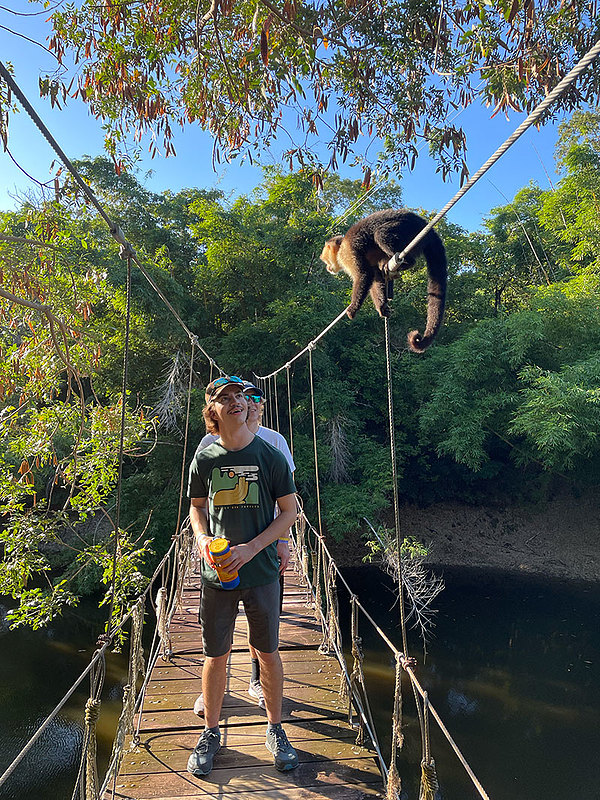 Biology major Sara Gehling ’23 spent J Term on Luther’s Roatán: Ethical Engagement in a Changing World course. “There was a lot of diving into the unknown,” she says, “and not just into the ocean when we were scuba diving. Most of us didn’t know each other very well if at all when we started the trip, but by the end of it we had formed some really great friendships.” Steven Conradt ’23 stares up at a capuchin monkey on a suspension bridge at Gumbalimba Park. Sara writes, “This picture was moments before the monkey stole the Pringles in his hands—one of our funniest memories.” 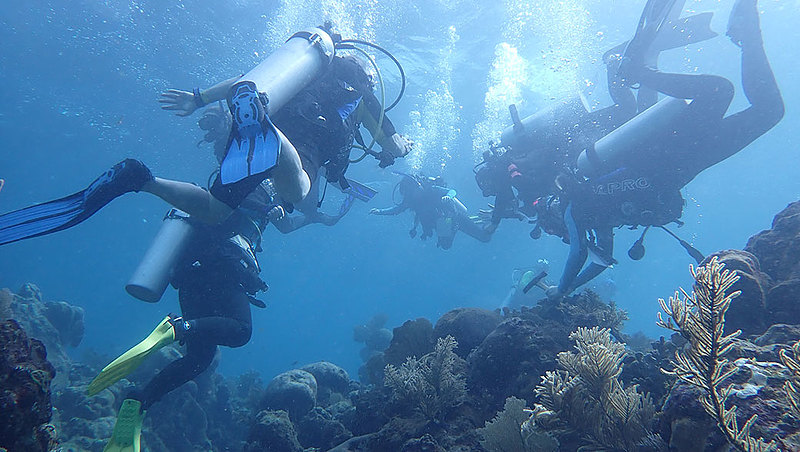 Sadie Pichlemann ’23 sent in this photo (taken by associate professor Dawn Reding) of her group planting coral during J-term in Roatán. “Conservation and restoration were a big focus of our class, and we were given the opportunity to do hands-on work cleaning coral tree nurseries and planting juvenile corals out in the open reef to encourage the growth of coral populations hard-hit by stony coral tissue loss disease and climate change,” she says. 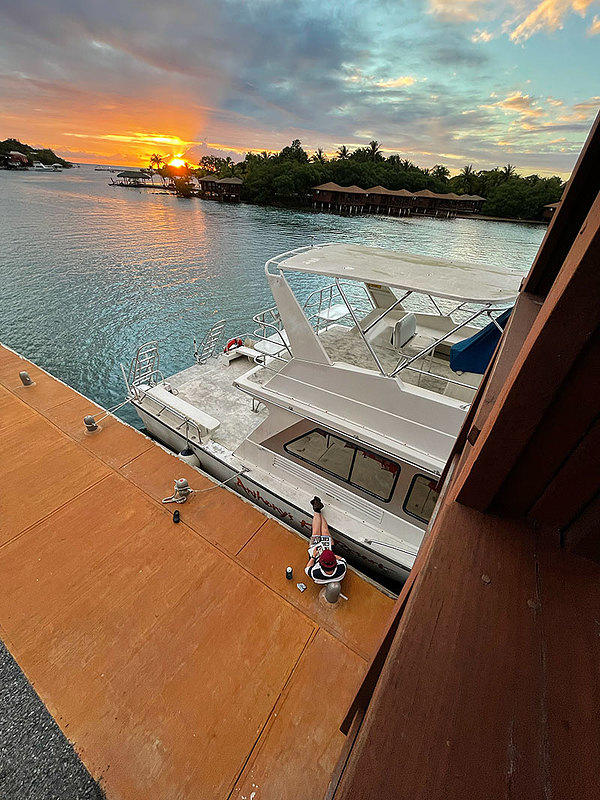 Sara Gehling ’23, who studied in Roatán, submitted this photo of Sophie Epps ’23 enjoying the scenery, listening to music, and studying fish species with her feet propped up on their trusty dive boat, the Stingray. 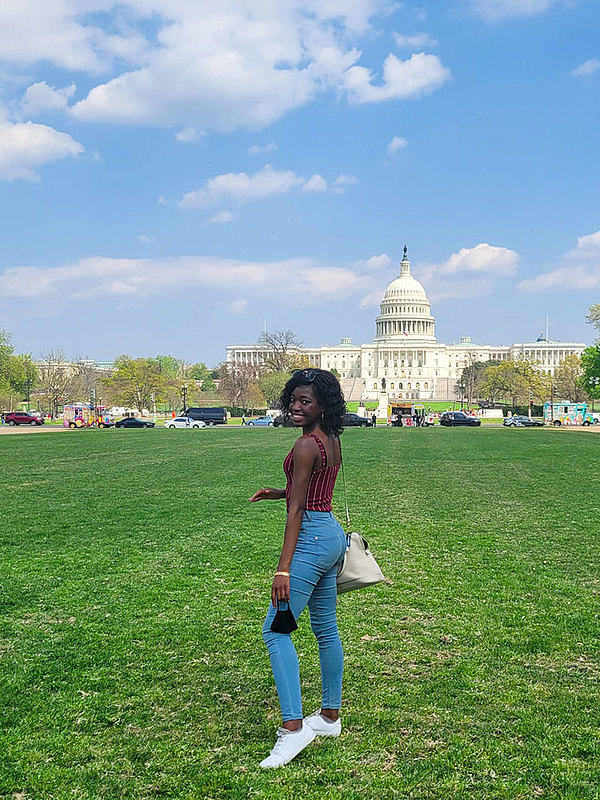 During the Washington Semester, Alice Odame ’22 interned at the Legacy Premier Foundation, a global developmental nonprofit committed to empowering underserved communities. She still found time for sightseeing, like this day when she visited the US Capitol. 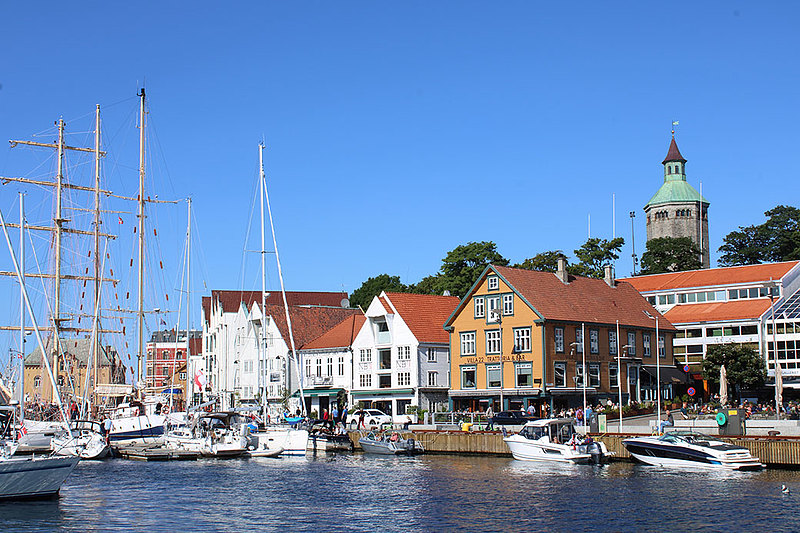 Sociology major Katilynn Swanson ’22 spent last fall at the University of Agder in Norway. She sent us this photo of the wharf in the city center of Stavanger. “This was the first trip I took in Norway with my flatmates,” she says. “We got to explore the city and hike to Preikestolen, an almost 2,000-foot-tall cliff overlooking Lysefjord.” 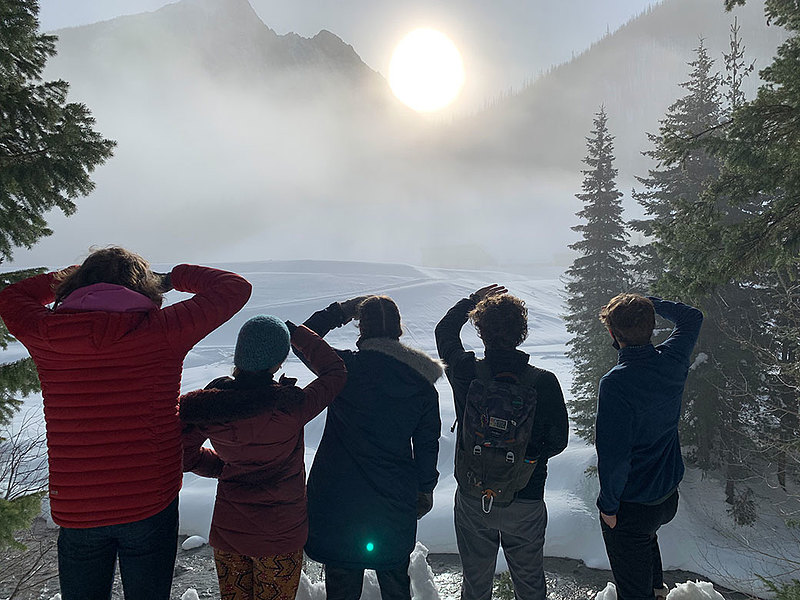 Thomas Woodford ’23 spent J-term at Holden Village in Washington state on Luther’s Environmental Issues in the Pacific Northwest course. “I was most impacted by the sense of community at Holden Village,” he says. “The wide variety of activities, the shared meals, and the evening Sacred Space events all brought our group of J-term students close together; we still enjoy hanging out with each other here on campus. Every event was intentional and inclusive, allowing for participation from every person at Holden, both staff and students. My most memorable daily event was going to the sauna every night with students from Luther, Augustana, and St. Olaf; I think I made some truly lifelong connections there.” Here, a group of students view the mountains on a foggy day.