Many of us have seen the historic Campus House photo of the Brandt family in front of their parsonage, the women and children in long, flowing dresses, the men in formal black suits, the table filled with what must surely be flatbrød and rømmegrøt. But imagine for a moment what the incoming students of 1867 saw: a substantial, crisp new building in a very contemporary Italianate East-coast style—of which the new town of Decorah had only a couple of examples—standing across an unmown meadow from the only other campus building, the 1865 Gothic-towered Main.

Luther sits at a unique intersection of landscape, architecture, and history. It boasts features of significance from several periods, including several midcentury modern buildings and also a campus design by internationally renowned landscape architect Jens Jensen. 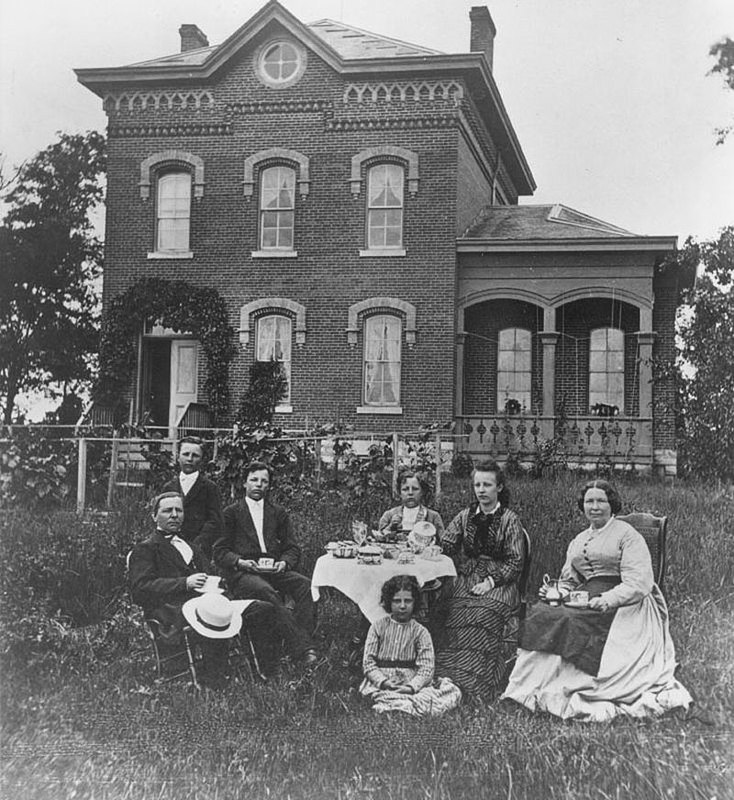 Campus House, former parsonage of the Brandt family, is one of many significant features that earned Luther's central campus a spot on the National Register of Historic Places.

Now, after three and a half years of community effort, this distinctive site—including the historic 32-acre upper campus, 24 buildings, and nine outdoor sculptures—has been named to the National Register. Although many colleges have individually designated NRHP buildings, there are only three Iowa colleges with an extensive historic district, and only a large handful of such districts in the upper Midwest.

The nomination process started in 2017 with the Decorah Historic Preservation Commission’s ongoing project to catalog and celebrate the work of local architect/engineer Charles Altfillisch, who designed every major Luther building between the 1926 Preus Gymnasium and the mid-1960s Tower residence halls.

Other volunteers included present and retired Luther faculty and staff and DHPC and local community members. “This was another one of those successful collaborative Luther/Decorah projects,” says Adrienne (Leseth) Coffeen ’71, a DHPC member and project researcher.

Volunteers brought their own strengths to the project. Coffeen, for example, drew on both archival materials and family history when researching Loyalty Hall, which was designed and built by her husband’s grandfather A. R. Coffeen. Because of her long-standing commitment to women’s history and to women at Luther in particular, late professor emeritus of English Mary Hull Mohr researched Brandt Hall, Luther’s first women’s dormitory. Professor and reference librarian emerita Elizabeth Kaschins worked with retired library staff member Kathy Buzza to research the 1969 Preus Library.

National Register designation does not place explicit limits on future campus changes, nor does it offer any direct funding to support preservation. “What it does do,” according to Muggli, “is provide a constant reminder that the Luther campus—both its buildings and its landscape—is a precious legacy, a gift to be preserved and a vision to be nurtured.”

Thanks to Mark Z. Muggli for contributing to this article.