The Studt family began in the Luther music program. Larry Studt ’90 was a singer with Norsemen (now Norskkor) and then Nordic Choir, and Rachel Braaten ’89 sung with Pike Kor (now Aurora) and Collegiate Choir and was a sought- after collaborative pianist. Their dating life kicked off through French fries after music rehearsals for the annual Messiah performances Rachel accompanied.

After they graduated, married, and started a family in Eau Claire, Wis., music remained a focus of their lives. Rachel accompanied the children’s choir at Trinity Lutheran Church, where their three kids—Claire, Laurel, and Nathan—sang. Both she and Larry were members of the senior choir there. Larry also sang with Master Singers, a choral music group in Eau Claire. 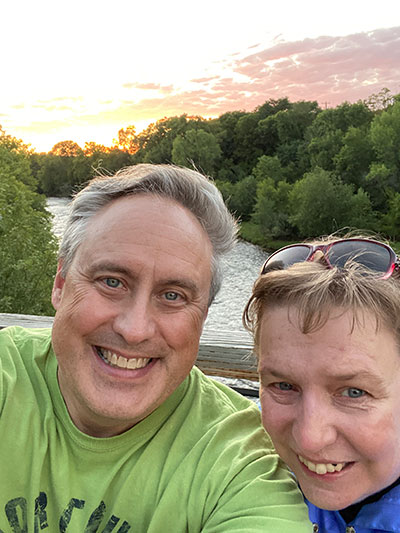 “Music was always in the house growing up,” says middle daughter Laurel ’22. “Waking up in the house, my mom would be playing ‘Clair de lune’ on a Sunday morning, and it was just so nice to be surrounded by that because it really fostered my love for music. It was such a wonderful way to grow up.”

Laurel decided to continue the Studt family musical legacy at Luther, matriculating in 2018 and earning membership in Nordic Choir her sophomore year. On move-in day, Rachel stumbled on an acorn and broke her ankle, ironically behind the Jenson-Noble Hall of Music. “I remember seeing them drive away and thinking, Oh my gosh, these next four years, I just don’t know what could happen,” Laurel says.

By then, the family already knew that something was off with Rachel. Earlier that year, she’d fallen going up the bleachers at a basketball game, after which she admitted that she’d been falling a lot. When he took the garbage out a night or two later, Larry says, “I saw my tracks next to her tracks in the fresh snow, and hers were dragging. I’d never seen that before.”

It took a couple of years and many tests and appointments, but eventually the Studts learned that Rachel was experiencing a rare form of young-onset dementia, progressive supranuclear palsy, a brain disorder with a typical lifespan of six to 10 years from onset of symptoms.

And then the pandemic hit, sending the two older Studt children back home to shelter in place with their parents and high-school-aged brother. “They came home and we had those months together, which was great,” Larry says.

“It was a blessing and a curse,” says Laurel. “I felt really blessed to be able to have that extra time with my mom before she went really far downhill. So that was nice just getting to go on walks and play cards and listen to music and watch movies—it kind of felt like how it was when we were kids again and a normal family. But I would say by the summertime—like June, July—she really started to progress.”

Larry was working full-time as a physician—a stressful but essential endeavor in the early days of the pandemic—and the family had been having a part-time caretaker called a Visiting Angel help out with things. But with Covid precautions on everyone’s minds, Laurel offered to take on the role of part-time caregiver.

While the changing dynamic of child caring for parent was sometimes uncomfortable, the experience illuminated for Laurel that she wants to become an occupational therapist. “It really sparked my love for what I want to do in the future,” she says. “It’s shaped me to be who I am.”

Rachel’s own father had suffered from a different kind of dementia. He wasn’t involved in any care or end-of-life decisions, and Rachel saw the toll it took on her family. So she became really proactive. She toured memory care facilities, and when it looked like the kids would head back to school in the fall, she announced that she was ready to move into one.

Because it was the height of Covid, this decision signaled a major letting-go for the entire family. They would be able to enjoy outdoor visits or stand outside Rachel’s window, but the days of close contact had come to an end. 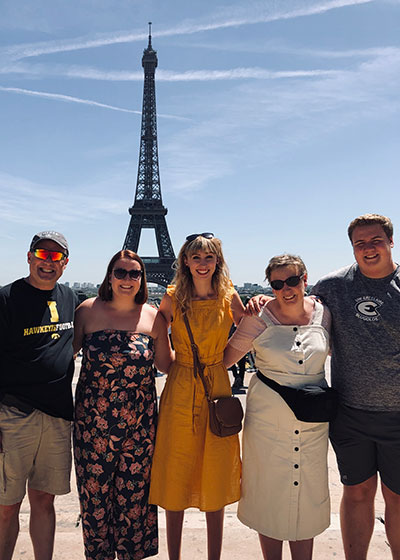 The family had been trying to find ways to memorialize Rachel. She’d been a children’s librarian, and they’d donated to the Eau Claire public library expansion in her honor, but it didn’t feel like quite enough. Larry had the idea to commission a piece of music as a sort of remembrance of this woman through whom music flowed. He reached out to a composer, Zachary Moore, whom he’d met in Master Singers. When Moore asked about words, Larry sent him his back-of-the-calendar jottings as a starting point. “We should use this,” Moore declared.

Around this time, Larry connected with Nordic Choir director Andrew Last ’97, who knew Moore’s work and thought the anthem, entitled “I Won’t Forget,” could be a fit for Nordic. “When I got the piece, I listened to it twice,” Last says. “It was just a computer-generated soundtrack from a computer program at that point, but I knew it was lovely. And just reading the text over as I followed along in the music, it became very, very evident that this would be not only on the tour program, but a really special part of the program.”

Nordic had recently received an invitation to perform for the American Choral Directors Association conference in Chicago in February 2022. “Our whole story of that Chicago performance was what we called Our Covid Journey,” Last says. The program he arranged “told the story about how we made our way through the pandemic—the sadness, the anger, the frustration, the joy of getting to sing together again. And I thought, Oh my gosh, this is a part of the story as well. Because in the midst of this pandemic, people lost loved ones.”

Laurel, who describes herself as a private person, remembers the day the piece, including her family story, was handed out to the choir. “I always get places early—my mom instilled that in me—so I was one of the first people in the choir room. I remember opening the copy and starting to read it and just feeling really overwhelmed because a lot of people knew what had happened, but a lot of people didn’t. I had people coming up to me afterward saying, I had no idea that this happened. It was an emotional thing because people can connect to it. People have also lost loved ones, especially during Covid—several members in the ensemble lost members of their family. So that was really hard. I thought I was ready and I knew it was coming. I knew it was getting handed out. And I just had to take a moment and leave because it was emotional to feel the support, yes, but also the grief and the sadness of everyone.” 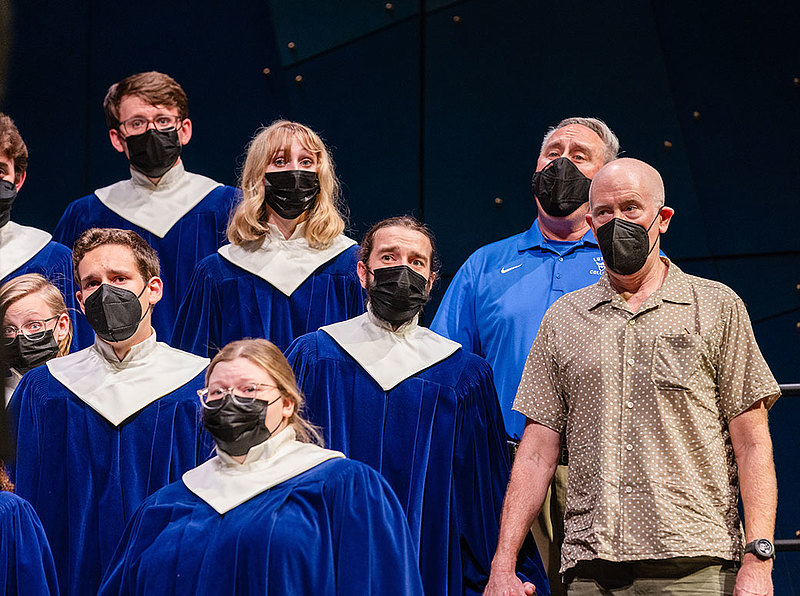 Last May, Laurel Studt ’22 (center left) performed with her dad, Larry Studt ’90 (in blue), when Nordic Choir sang with members of the Stand in the Light Memory Choir in the Studts’ hometown of Eau Claire, Wis.

Last says, “I think the students were able to invest in the piece in a way that they could all recognize something that happened during the pandemic—maybe the loss of a loved one while not being able to fully involve themselves in the departure of that person.”

Larry has been able to watch Laurel and Nordic Choir perform this piece three times—including once in the Studt family’s home community of Eau Claire (Larry has since moved to Ankeny, Iowa). There, the performance involved singing with the Stand in the Light Memory Choir, which includes people with memory loss and their care partners. Proceeds from the performance went to that choir and to the Eau Claire Aging Disability Center and Resource Center.

As far as singing “I Won’t Forget,” Laurel says, “The words are so personal, and the piece basically tells the story of the timeline from the first warning signs to my mom passing and our grieving. So it feels like we’re all acknowledging that this has happened for my mom—but this has also happened for so many people.”
“It was really important for us to tell this story,” Last says. “And the piece was received with tons and tons of ovations. I think it really resonated with a lot of people.”

The courtship, our wedding day,
our children and families
our time spent together,
all difficult to forget.

Our jobs and vacations,
Bike rides, walks, and board games.
Our life, our plans derailed.
But I won’t forget.

The fall at the ball game
A light bulb then denial
The beginning of an illness
Unrecognized.

The scans, tests, and studies
Sugarcoating and reality
Our bucket list and future
Why did we wait?

The bruises, denial,
the distance, the chasm
And seeing you fight
until the end.

Abundant blessings we have had!
A journey I’m not worthy of.
Thank you. I will never forget.

My love for you.
I will never forget.