On August 10, 2020, an intense windstorm raced from Iowa to Indiana. This type of storm is called a derecho—Spanish for straight—for its powerful and sustained linear winds, in this case gusting between 70 and 110 miles an hour. The derecho wrought an estimated $7.5 billion in damage to buildings, crops, and trees—more than any thunderstorm in modern times. Luther alumni who live in the hard-hit Cedar Rapids area were first stunned by the destruction, and then determined to help restore their communities.

Paul Gibbs ’84, of Marion, northeast of Cedar Rapids, had expected a normal thunderstorm and watched in surprise as the gusts repeatedly pushed a tree low over the truck in his driveway. That tree survived, but across the street, Gibbs says, few if any trees remained. Power lines were down everywhere. Neighbors had a badly damaged roof, so one of the first things Gibbs did was loan them his generator to start drying their rain-soaked interior.

Pat ’14 and Allison (Feltes) Fagan ’15 lost several trees at their home, but the oak under which they took a wedding photo still stands at left. This was the view of their front yard from their house after the derecho hit last August.

Gibbs also had a chain saw, and for the next seven days he cut through downed trees in his neighborhood. The work was tough. Twice, his saw blade came off. A neighbor’s family then loaned him a larger saw, and he used that for the biggest trunks. It’s estimated that at least half of the trees in the Cedar Rapids area were destroyed or heavily damaged. With so many down, Gibbs says, his neighborhood is a different place. “You can see for blocks and blocks and blocks,” he says.

As the storm began, Rich Altorfer ’74, of Cedar Rapids, heard a report that visibility was down to ten feet. His wife, Candy (Grimm) Altorfer ’73, was at a store, and he quickly called her to come home. She made it in the door just as a tree crashed through their roof.

Their longtime tree service, which arrived the next day, said they wanted to buy equipment to help with the cleanup. It was obvious the work would take months. Rich immediately loaned them enough to buy a truck with a large bucket scoop and a skid loader.

Pat ’14 and Allison (Feltes) Fagan ’15, of Cedar Rapids, got word the storm was coming while they were hiking near Decorah. They called their parents and asked them to batten the hatches at their home. Giving the storm time to pass, they dawdled a bit and then drove south.

Downed semis blocked an interstate and debris clogged city streets as they zigzagged home. “It was like a bomb went off,” Pat says. Fortunately, while they lost four trees, the Fagans’ home had only a small hole in the roof. Better yet, the oak in their front yard, under which they’d taken wedding photos in April, still stood. 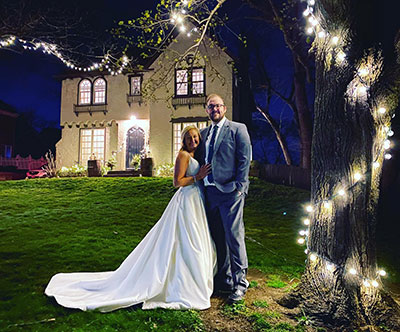 Pat ’14 and Allison (Feltes) Fagan ’15 were wed in their front yard last April, a quick reworking of their original plans due to the Covid-19 pandemic. They posed for a wedding photo under a tall oak that later survived the derecho.

Pat describes the recovery effort: “A growing mob of people started cleaning up at one house with chain saws and rakes, moving stuff to the curb to be picked up by the city. When they finished at one house, they would just move on to the next house and the next house and the next. It was heartwarming to see people coming together without expectation just because everyone needed help, and everyone was willing to lend a hand.”

Over in Marion, Gibbs and his neighbors found a silver lining in the clear weather following the storm. Physically tired and mindful of keeping their distance in the summer of COVID-19, neighbors nevertheless communed in their lawn chairs each night. Their reward was a galaxy of stars blinking overhead, which until now had been hidden by the tree canopy and city lights. “It was amazing,” Gibbs said.