Among its many Fulbright recipients, Luther can claim a father/son pair. During his Fulbright fellowship in 2011–12, Sean Taylor ’84 spent a year in Norway with his family, including son Ethan ’16—who earned his own Fulbright to Tajikistan in 2019–20!

Then: Fulbright research scholar at the University at Agder (UiA), in Kristiansand, Norway, 2011–12. Sean also lived in Norway with his wife, Anne (Lysne) Taylor ’88, for several years in the 1980s.

This is a difficult question, as there were several highlights. During my time as a Fulbrighter at Agder I was able to introduce a role-playing pedagogy called Reacting to the Past to students and faculty at UiA. Getting the students to play the game, and have virtually the same positive reactions about learning I get from American students, was the highlight of my academic time in Norway.

HOWEVER, one of the coolest things we experienced in Norway was the torchlight parade honoring the Nobel Peace Prize winners. Each year there is a “fakkeltog” from Youngstorget square to the Grand Hotel on Karl Johan Street in Oslo, just across from the Parliament building. My family, along with many of the Fulbrighters and their families, participated in that parade and then cheered for the three Peace Prize winners. That was tremendous fun and truly represented what the Peace Prize, and Fulbright, were all about. 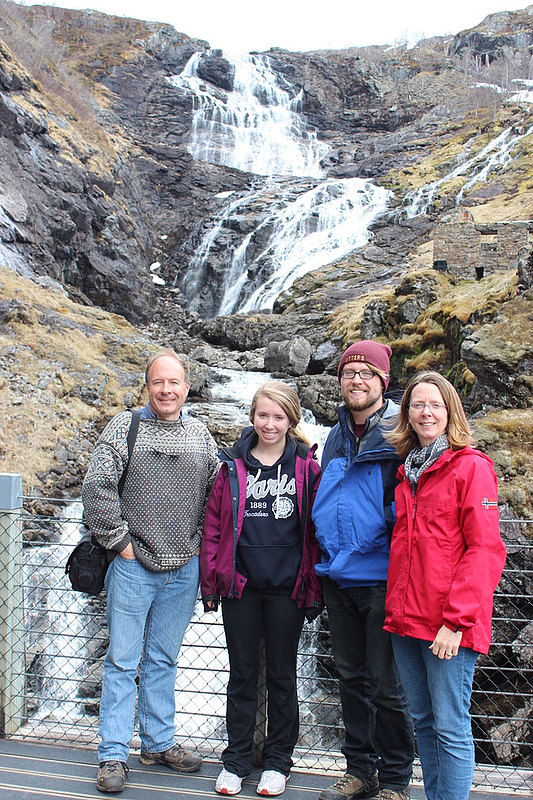 Tell us more about what you do now.

I am a professor of history at Minnesota State University Moorhead (MSUM). My career since the Fulbright is tightly connected to Norway. One of the ideas behind being a Fulbright scholar is that you don’t simply say “thanks a lot” on your way out and never have contact again. During my time at UiA I realized MSUM and UiA were very similar schools, and I have worked in the intervening years quite hard to get an exchange program off the ground. I also have a research partner in Norway, Erik Mustad, and we have a grant from the Norwegian state to work with role playing in the Norwegian education system. Erik and I have partnered with Luther’s Maren Johnson and Anne-Marine Feat through a four-year grant (that is now in a two-year COVID time-out) to work on utilizing Reacting to the Past for language learning and acquisition. We hope to be able to restart our summer grant work next summer, COVID willing.

In short, I spend a lot of time thinking about getting students to engage in the world around them by becoming critical thinkers and active learners. Role playing pedagogies like Reacting transform the learning experience from passive to active by having students lead the learning and interact with each other and their professor in a way quite different from a normal lecture classroom. In many ways, the active nature of Reacting reminds me of my time at Luther, where many classes were based on class interactions. 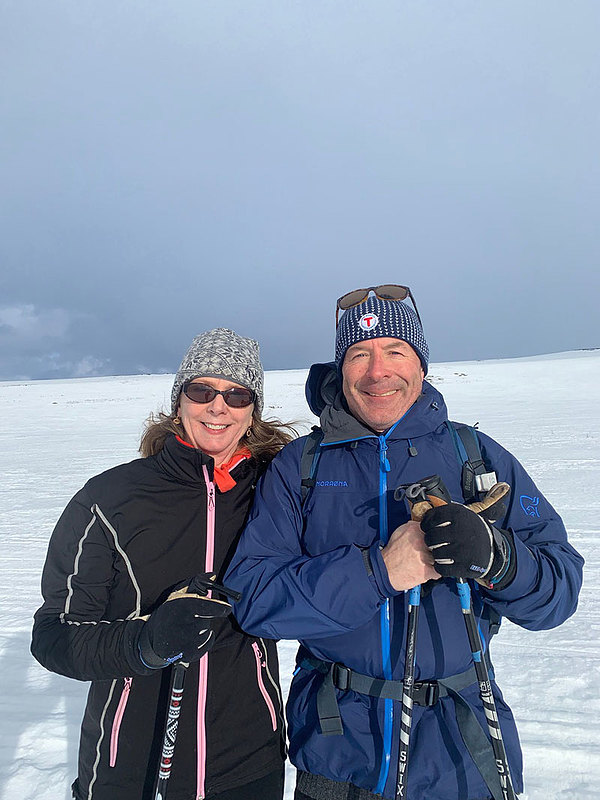 Sean and Anne Taylor in Hovden, Setesdal, Norway, in 2019

How did your Fulbright experience shape the path your life has taken?

Since the Fulbright 10 years ago I have worked really hard to get students to embrace learning about other countries and cultures. I mentioned the exchange program—multiple Norwegian students have come to MSUM to study, and so far two MSUM students have spent a semester at UiA.

I am really excited for spring semester 2022 as Erik Mustad and I will pilot a “trans-Atlantic classroom” where students from both MSUM and UiA will be in the same digital classroom for a course on US history. Technology today enables us to run a hybrid class where they can all work together either synchronously or asynchronously. In any event, it is another opportunity for students in different parts of the world to get to know each other.

Our world is getting “smaller” with the advent of digital technology and the ease of international travel. Americans as a whole tend to travel outside the US much less, so I think it is very important for MSUM students to study abroad so they develop a more nuanced and clearer view of the world they live in.

Now: pursuing dual master’s degrees in public policy and international and regional studies at the University of Michigan

There are two moments that immediately come to mind as highlights.

The first was the day we introduced our students to Ultimate Frisbee. Due to a variety of factors (including availability of space, scheduling, sensitivity toward gender expectations, and more), it was very difficult to prepare lessons around sports and athletics. We were fortunate enough to track down a frisbee that we could use to teach our students the fundamentals of Ultimate Frisbee in an unused soccer field after normal classes had ended. After many requests, we made frisbee a weekly event; several months in we had 15–20 students regularly participating in pickup games that greatly improved both imperative language usage (“Throw it here!” “Throw it to him!” etc.) and built a sense of genuine community and friendship. Although I was never a member of LUFDA or Pound, I certainly thought the game added a touch of the Luther experience to my lessons. 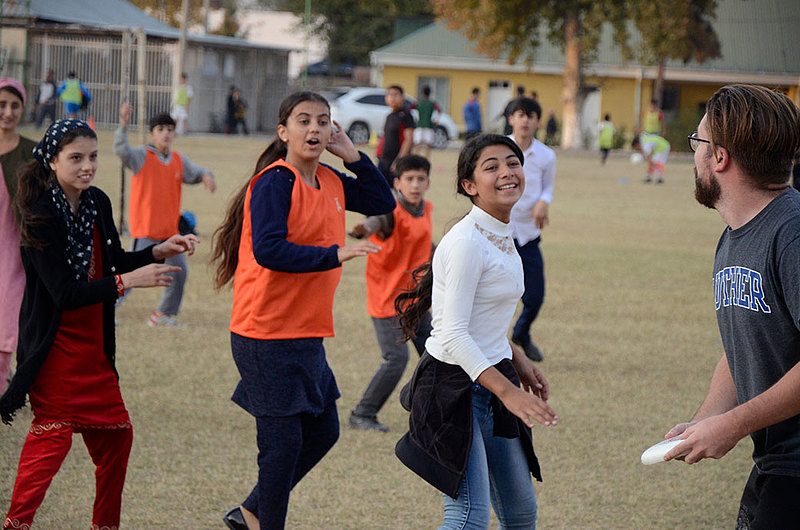 During his Fulbright in Tajikistan, Ethan Taylor taught his students Ultimate Frisbee.

The second moment was our midyear conference, where our entire cohort flew to Kyrgyzstan for a weeklong series of workshops and socializing. Although not technically a highlight from Tajikistan, catching up with friends, enjoying creature comforts (such as wi-fi and non-instant coffee!), and crowdsourcing new lesson ideas was a much-needed break.

Tell us more about what you do now.

For the past year I have been studying at the University of Michigan, where I am pursuing dual master’s degrees in public policy and international and regional studies. I am continuing to study Farsi (Persian) and plan to begin studying Russian a year from now. In terms of research and academic interests I have two main areas: theory and praxis around Kurdish self-determination post-9/11, and the development of the Iranian healthcare system after the 1979 revolution, especially in terms of women’s access to healthcare in rural areas and the effect of sanctions on healthcare systems. 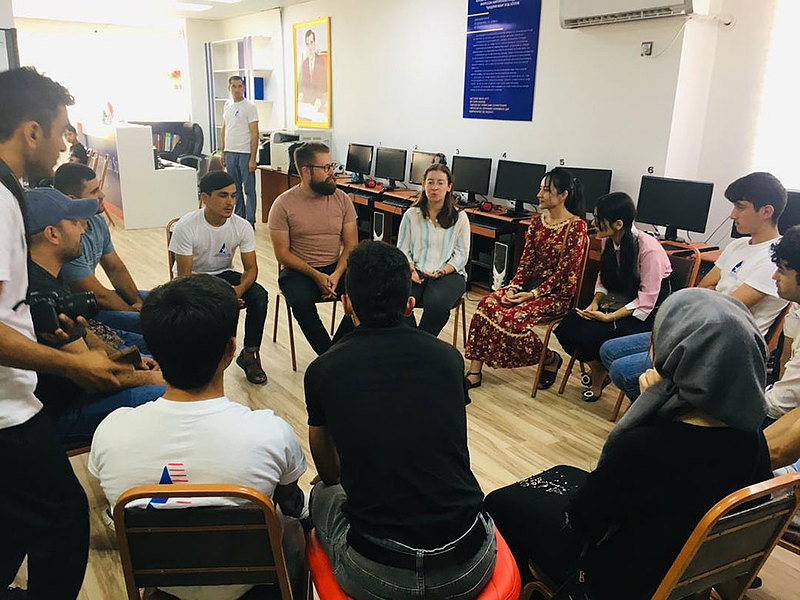 Ethan Taylor engaged in a conversation circle with students at an embassy-run educational center in the city of Kulob.

How did your Fulbright experience shape the path your life has taken?

In some ways I never stood a chance at shaping my own path! My dad (Luther class of ’84) won a Fulbright to southern Norway in 2011 and took the whole family with him as he taught at a university in Kristiansand. The opportunities were absolutely life-changing in the best ways. Not only did I learn a new language, I also was forced on a near daily basis to think critically about cultural relativism— how do our very human experiences differ because of material determinants? How does the richness (and the limits!) of one language influence how you perceive your own? To what degree has a culture (such as our own) shaped cultures external to ours without us realizing it? These were complicated and often difficult questions for an eighteen-year-old, and I think it is only in the light of my own Fulbright experience to Tajikistan that I have begun to first articulate them, and second to understand them. 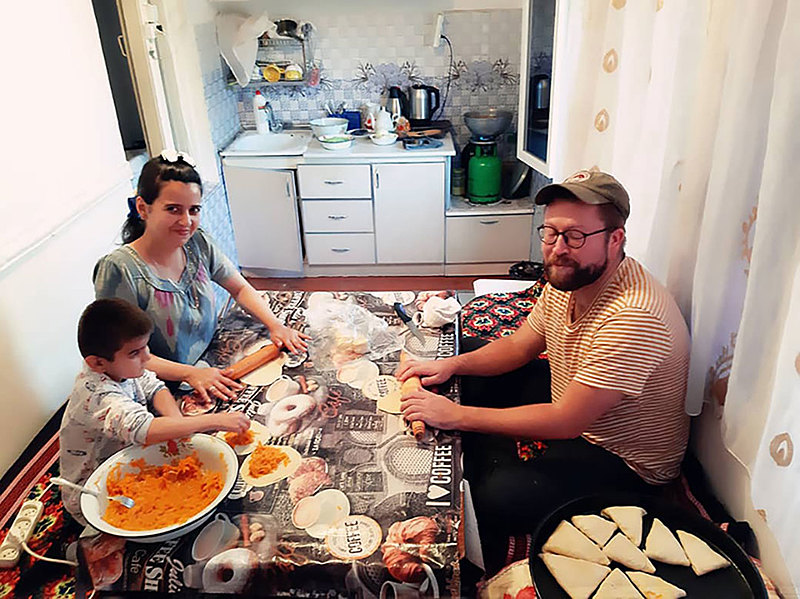 Ethan Taylor's Tajik teacher and her family taught him how to make pumpkin sambusa, a classic pastry in much of South and Central Asia.

How did it shape your perspective?

My time in Tajikistan was a study of social contrasts to Norway. Norway is a wealthy petro-economy with a highly developed social safety net and a stable, (relatively) homogenous society. Tajikistan was colonized by the Russian empire and is the poorest of the former USSR countries. It was also ripped apart by a brutal civil war largely between ethnic groups for most of the 1990s. While my international experiences (including two years as a teacher in South Korea and as an alum of Luther’s Malta program) prepared me for the cultural niceties and the practical logistics of living abroad, the truth is the realities of living in a post-conflict country continue to shape my perspectives in graduate school in profound and unexpected ways that I myself do not yet understand completely. The shortest takeaway I can articulate is simply that we—as a society and culture—have a responsibility to use our resources and ingenuity to ensure that our better natures win out; that we are obliged to leave the world an improved place for people of all circumstances, even if (and especially when) that means asking uncomfortable questions about the way we perceive and are perceived in the world.