At least four current Luther faculty members—and many former and emeriti faculty—also received Fulbrights. In addition to those profiled below, Alexandra White, associate professor of management, has also received a Fulbright to teach and study in Bulgaria in 2021.

As a graduate student in 1999, I received a Fulbright to do research on the German Reformation as it occurred in the small territory of Mansfeld, an area not far from Leipzig in what until 1990 had been East Germany. My goal was to explore the work of Erasmus Sarcerius, the individual most responsible for establishing the Lutheran Reformation in Mansfeld. On my first trip to the archives, I was informed that none of Sarcerius’s personal writings had survived, a statement that demolished all of my research plans.  Devastated, I nonetheless entered the archives and started digging, eventually finding fantastic materials on a late 16th-century theological debate over the concept of original sin, a debate that divided Mansfeld’s society, from its pastors and churchmen, to the ruling counts, to the farmers and miners. Fistfights broke out in the streets and taverns over this point of doctrine, so that eventually soldiers from the neighboring territory had to be sent in to quell the unrest and forcefully remove the agitators on the side officially deemed wrong. In the end, my dissertation became an exploration of what factors, in addition to intellectual and religious convictions, caused these individuals and groups to take particular sides in the debate.

Lessons learned from this investigation have served me well. My research taught me not to assume motives but to consider how people from various segments of society, backgrounds, educations, and ethnicities arrive at positions on complex issues—often for reasons that have little to do with intellectual arguments, no matter how compelling they might be. On a personal level, the experience demonstrated the importance of resilience and to keep plugging along. “Everyone has a plan until they get punched in the face,” the boxer Mike Tyson once famously declared. My first day in the archives was my punch in the face. Starting to dig until I discovered something new demonstrated to me how even seemingly insurmountable obstacles can be overcome. 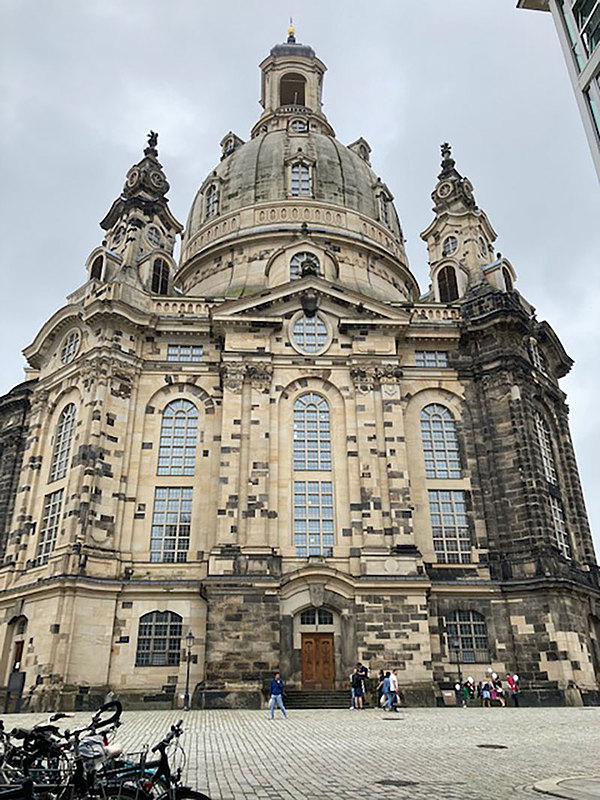 Last summer, Robert Christman conducted research in some of the same archives he used 1999. He took this photo of Dresden’s Frauenkirche, destroyed in WWII and rebuilt in 2004-5. When he worked in the Dresden archives as a graduate student, the church was a ruin with only the darker portions standing. Any original stones deemed salvageable sat on oversized book shelves next to the ruin, awaiting reuse.

The original, if unstated, purpose of the Fulbright Program was simply to get young Germans and young Americans together so that they could develop personal relationships after the horrors of WWII. I know this because one of my former classmates in graduate school was also a Fulbrighter in Germany, where he had met the late senator William Fulbright, architect of the program. When the senator asked him what he was doing in Germany, he replied that he was spending every day studiously toiling away in the archives.  “I didn’t start this program so that you could hide yourself in some musty old archive,” replied Fulbright. “You should be hanging out drinking beer with young Germans.”

I took the senator’s advice to heart and found accommodations in an apartment with German students, some of whom had been raised in the West, others in the East. It was this living situation that ended up being the most fascinating aspect of my Fulbright experience. After reunification in 1990, two countries with a common history and culture, but which had been utterly divided for 40 years, began the process of converging. More accurately, an open, democratic, and prosperous society absorbed a closed, authoritarian, poverty-filled police state. Financial systems, educational approaches, social and cultural norms, worldviews, basic outlooks, clothing styles—all of these things had grown apart in 40 years and now had to be reconnected.

Observing my roommates, I had a front-row seat to this historical phenomenon. I heard each side’s impressions of the other, the jokes they told about one another, complaints, stories, and arguments, and witnessed the friendships that occurred. Senator William Fulbright was definitely onto something when he decided that if you want to bring groups together and promote understanding, start by having their young people live, study, and play together.

The other highlight of my Fulbright experience was hearing Leipzig’s St. Thomas Boys Choir each week.  Forty years of communism had not dimmed the luster and virtuosity of this remarkable group, which traces its roots to 1212, and for which Johan Sebastian Bach spent 20-odd years of his life producing a weekly cantata. One of my favorite pastimes was attending devotions at St. Thomas Church each Saturday afternoon, where one could hear the choir perform the motet or cantata that had been prepared for the next day’s Sunday service. The world-class excellence of that choir, its traditions steeped in the sublime and transcendent music of Bach, himself largely a product of the spirit, Weltanschauung, and musical traditions of the Lutheran Reformation, was an absolute cultural and spiritual wonder. Such a heritage, this experience taught me, is one worth preserving, wherever it may be found.

Elizabeth Steding, professor of German and director of student honors and fellowships

I had a combination teaching/research grant in Münster, Germany, in spring 2018. I did research on the portrayal of GDR (East German) literature in textbooks used in the upper grades of German high schools over a span of 30 years. I am working on a book: Just a Footnote of Literary History?: The Fate of GDR Authors in Gymnasium Curricula and Textbooks, 1985–2015.

I also co-taught a course at the University of Münster with professor Cornelia Blasberg called The Other Germany: Literary and Medial (Re-)Constructions of the GDR After 1989. Both of us are the only faculty members at our institution who teach courses about the GDR, so it was really enjoyable to collaborate on developing and teaching this course. 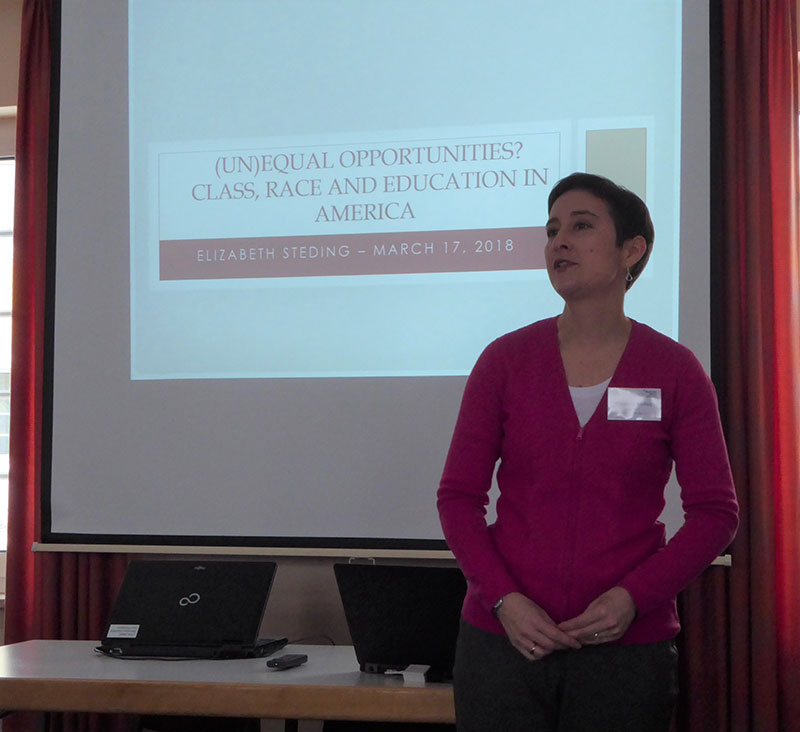 During her Fulbright in Münster, Germany, in spring 2018, Elizabeth Steding was invited to present at a conference for English teachers in Eastern Germany.

It is always great to spend time in Germany! I was also invited to present at a conference for English teachers in Eastern Germany. I drew on my experience teaching Paideia 450: Making Decisions for US Schools and presented about race, class, and inequality in American education. I used to teach high school, so it was fun to be able to work with high school teachers and hopefully give them a richer understanding of some topics/issues that they can discuss with their students.

How did your Fulbright experience shape your teaching?

While my 2018 Fulbright experience was enlightening, it was actually my 1997–98 teacher exchange experience that shaped my teaching and my career. I was teaching high school at the time and taught for a year in Germany (English, math, and music). Teaching abroad that year not only improved my German and broadened my view of the world, it also got me thinking seriously about graduate school. A year after I returned to the US, I started a doctoral program at Michigan State University.

How did it shape your perspective?

The two things I remember most are the people we met and the tangible sense of history in the Balkans.

Montenegrins are not overly warm to outsiders, but once we gained an introduction they were as kind and generous as any group of people I have ever met. We could not have survived the first month if new friends had not given up hours to help us get a cell phone, navigate the city, figure out the grocery stores, etc. 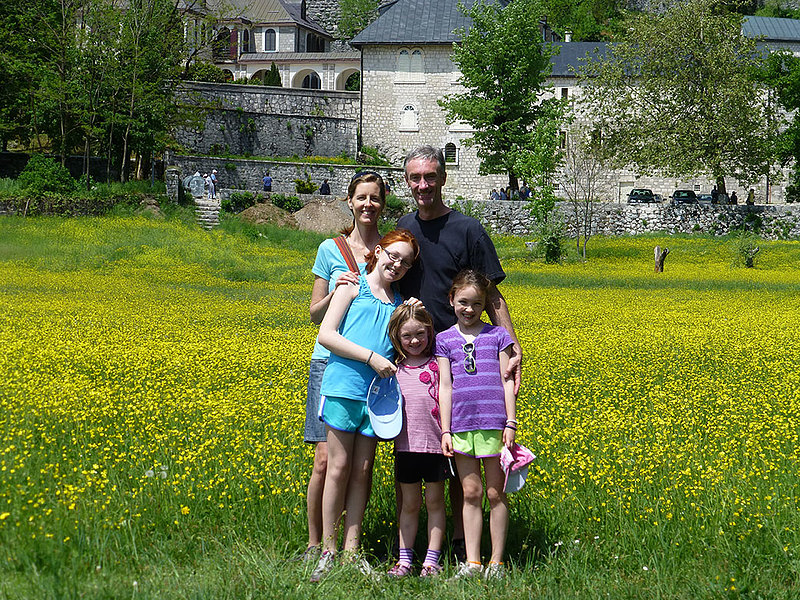 During his Fulbright in Montenegro, Steve Holland and his wife, Krista, visited the Cetinje Monastery with their children (including their eldest, Ava '24).

We also had many opportunities to travel around the Western Balkan countries (Montenegro, Bosnia and Hercegovina, Croatia, Slovenia, Serbia, Albania, and Macedonia). We saw everything from 10th-century monasteries to remnants of the Balkan wars. The region is a crossroads of many different cultures and religions, and you can really see the impact the long and complex history of the region has on the present-day Balkans.

How did your Fulbright experience shape your teaching?

The Fulbright experience helped me better understand the importance of history, politics, and culture in shaping an economy. As a result, I think my courses have become more interdisciplinary, and I have tried to create more room in class for discussion of things that are not normally considered “economics.” In addition, after living and teaching abroad for a year I have a better understanding of how hard it is, and this has given me a much greater respect for our international students.