Adding colors to the crayon box of life 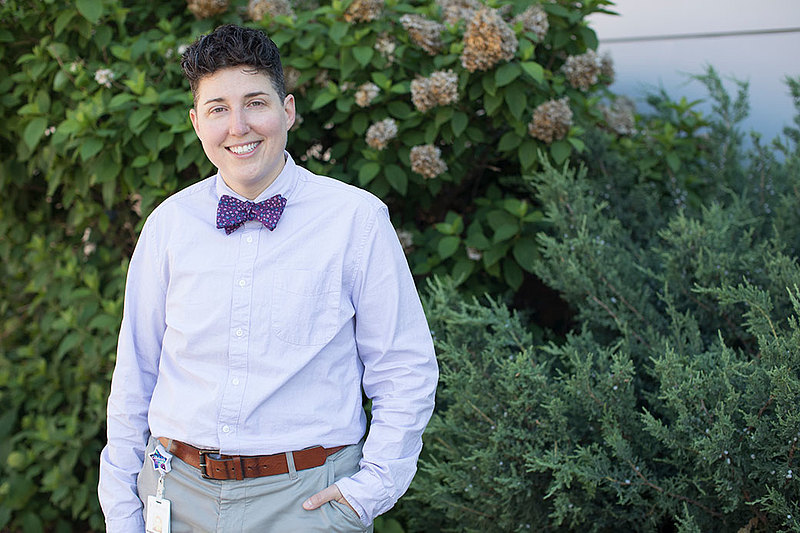 Goepferd identifies as nonbinary and uses she and they pronouns, with a preference for they. “For many years, I dressed more feminine at work than I do now,” they explain. “I felt like I had to, to be respected or treated well in the medical profession.

“But I got this job being in charge of education, and I felt like I needed to show up as my best self every day. I started to wear bowties because it felt like I was dressing up a little bit more that way. I immediately felt like I was finally myself. And when I started being more myself on the outside, I found my authentic power on the inside.”

Goepferd chuckles a bit when ruminating on the difference that the bowtie made. But they are also clear on its significance.

“My career ‘post-bowtie’ is so much more than my career ‘pre-bowtie,’ and I don’t think that’s a coincidence. When you give yourself permission to be who you really are, it allows you to live up to your full potential and exist in the world in all the ways you were meant to.”

What really lights Goepferd up is the chance to make gender identity and gender health easier to understand and support. They do this by educating both fellow pediatricians and the general public about gender health.

Goepferd also assists children who have struggles around gender identity and their families by practicing medicine in a multispecialty program focused on gender health.

“I’m doing exactly what I love,” Goepferd says. “I wouldn’t want to be anything but a pediatrician. I’m so passionate about it.”

Goepferd’s other main interest—besides raising their three young children—is sports. Wanting to play competitive basketball but also prepare for medical school is what put Luther on their college search map.

Former head basketball coach Jane (Greene) Hildebrand ’74 sealed the deal. As a high school senior in Iowa City, Iowa, Goepferd tore their ACL playing basketball, ending their senior season. Other college coaches stopped talking to them, but Hildebrand went out of her way to express support and concern, even sending flowers to Goepferd’s hospital room when they needed surgery.

Hildebrand remembers Goepferd as a fighter who never quit in the face of a challenge, the ultimate team player who supported the team no matter what, and the consummate student devoted to excelling in the classroom.

Hildebrand also remembers Goepferd as someone who helped her learn more about different ways of being in the world. Goepferd came out to Hildebrand and their teammates as gay during their senior year. “Maybe I’ve taught them a few things, but they’ve taught us a few things, too,” Hildebrand says.

Recent awards by local and national organizations validate that Goepferd has found their mission in life as an educator and pediatrician. A member of the LGBT Standards of Care Advisory Board, Goepferd helped develop the first healthcare standards for LGBT people in the state of Minnesota. In 2018, Goepferd received the inaugural Business of Pride award from the Minneapolis/St. Paul Business Journal. In 2019, the American Academy of Pediatrics recognized Goepferd’s work in advancing the care of LGBT youth.

In an October 2020 TEDx talk, “The Revolutionary Truth about Kids and Gender Identity,” Goepferd uses a striking analogy to explain what’s at stake when we limit kids’ gender identity options.

It’s like asking a small child to draw a picture of themselves, but allowing them to use only one color of crayon: blue or pink.

“Imagine all the pictures we would never see,” Goepferd says. “We all deserve a bigger box of crayons.”