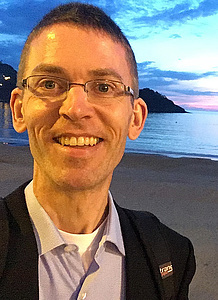 “Do not try to satisfy your vanity by teaching a great many things. Awaken peoples’ curiosity. It is enough to open minds; do not overload them. Put there just a spark. If there is some good flammable stuff, it will catch” —Anatole France

I teach several courses at Luther, including:

Courses I have previously taught:

The main objective of my research is to broadly understand religious and spiritual factors, especially forgiveness, and how they are related to mental and physical health and well-being. I have published a number of peer-reviewed scientific journal articles and scientific book chapters, and authored dozens of conference presentations and invited talks in Australia, Austria, Great Britain, Greece, and the United States. I have been involved in forgiveness research in Australia, Chile, Germany, India, Korea, Lithuania, Spain, Sierra Leone, South Africa, and Switzerland. I have worked with colleagues at Mayo Clinic and the University of Michigan Medical Center to understand the role of forgiveness in fibromyalgia, chronic fatigue, spinal cord injury, and substance use. I continue to seek new avenues in which to better understand and incorporate forgiveness in medicine.

I direct the Laboratory for the Investigation of Mind, Body, and Spirit at Luther College, and have mentored dozens of students. Several of these students have been co-authors on peer-reviewed research papers and presentations. Recently the lab was awarded funding from the Associated Colleges of the Midwest for a project titled, A Collaborative Scholarship Model for Liberal Arts Colleges: Applications for the Psychology of Forgiveness. This work involves the collaboration of laboratories at Luther and Grinnell Colleges to investigate psycho-spiritual approaches to promoting forgiveness.