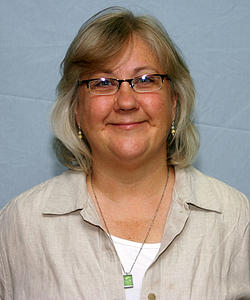 Professor Lise Kildegaard is married to Luther—that is, her husband’s name is Luther, though she probably feels married to the college as well, so active is she in the departmental and college conversation. A PhD from the University of Chicago, Lise brings her joy in intellectual work equally to her upper-level teaching of eighteenth- and nineteenth-century British literature and to the first year common course, Paideia. She has found a way to combine her Danish heritage with her scholarly work: her fine translation of the celebrated Danish writer Louis Jensen’s Square Stories was adapted into a delightful campus student theater production. And she’s doing more Jensen translations. A lover of poems, she often tacks a fave on colleagues’ doors as a way to get our weeks off to a good start. She bikes to work.

ENG 245: A Literature By Women

A study of how women writers from different historical periods use poems, stories, essays, and plays to address gender issues in the private and public world. The course looks at how literature both presents and critiques culture and its construction of gender, as well as how it offers new visions and choices for women and men. Readings include such writers as Mary Wollstonecraft, Charlotte Bronte, Emily Dickinson, Toni Morrison, Gloria Anzaldua, and Octavia Butler.

This course explores the range and variety of British literature written after the restoration of the British monarchy in 1660, and before the revolution in France in 1789. Literary artists in this era produced innovative writing in several new genres, including journalism, travel writing, biography, satire, and the novel. The literature of the eighteenth century was also a crucible for modern understandings of gender, race, and class identities. In this course, we explore these literary developments within their historical contexts, aiming for a broad coverage of canonical and not-so-canonical texts. Representative authors may include Dryden, Congreve, Behn, Swift, Pope, Johnson, Fielding, Burney, and Haywood. Offered alternate years.

Study of literature for young adults (ages 12-18), with emphasis on reading of representative fiction, creative nonfiction, and poetry. Course also includes history of the genre, interpretive approaches to texts, resources and materials for teaching. Designed for teaching majors; useful for others working with young people.

An introductory literature course, with specific focus and readings announced each semester. This course is both an introduction to the pleasures of reading and interpretation and also an opportunity for student writing in a range of analytic and creative forms. Open to all students in all majors. Students may enroll in more than one version of the course. Sample topics: Caribbean Women Writers, Literature of the Apocalypse, Multiple Hamlets, Poems for Life.

A writing course for students in all disciplines. The course includes practice and instruction in writing for a variety of audiences, emphasizing revising and responding to others’ writing. Students discuss well-crafted prose essays that include effective argument and clear language and organization.

Study of literature for young adults (ages 12-18), with emphasis on reading of representative fiction, creative nonfiction, and poetry. Course also includes history of the genre, interpretive approaches to texts, resources, and materials for teaching. Designed for teaching majors; useful for others working with young people.

How could angels in Heaven and humans in Paradise rebel against the God who created the world and made it good? Is it better to rule in Hell than serve in heaven? What would it be like to live in Edenic bliss, anyway? John Milton sought to answer those questions in Paradise Lost. Second only to Shakespeare in its influence on later writers, Milton’s work probes religion, politics, and gender in a remarkable melding of classical and Christian traditions. We will read this epic, as well as other poems and prose in which Milton engaged the tumultuous events of the English civil wars and its aftermath.

In Northanger Abbey, Jane Austen’s narrator remarks, “The person, be it gentleman or lady, who has not pleasure in a good novel, must be intolerably stupid.” In this course, we defy stupidity by enjoying a variety of good British novels, beginning with the eighteenth-century, and arriving, after many pages and multiple plot twists, in the modern era. We consider the history of the genre, the social and political context of the texts, and the development of the British literary tradition. Representative authors may include Burney, Fielding, Austen, Dickens, George Eliot, Thackeray, Conrad, and Woolf.

I am currently writing on how recent scholarship in the discipline of Human Geography can help us read the politics of space in George Eliot’s novels. I’ve been reading the work of geographers like Derek Gregory, Gillian Rose, and Doreen Massey, and finding a lot to think about.