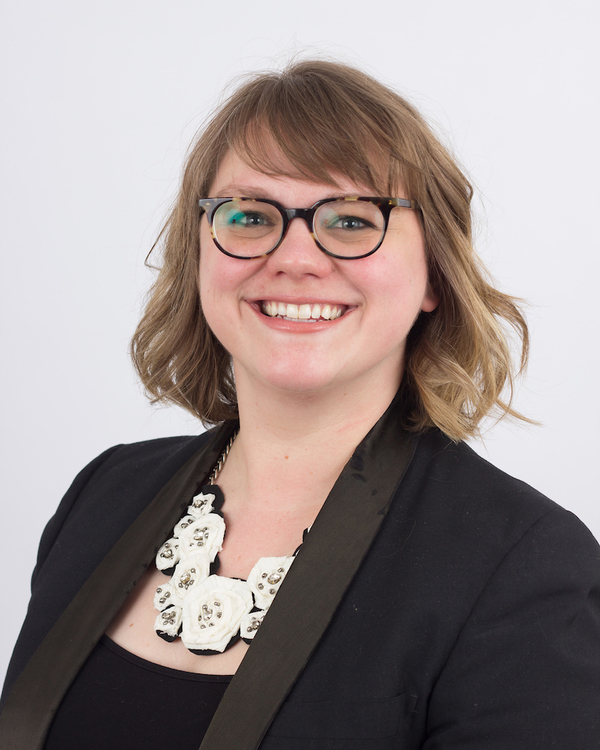 Lindsey Row-Heyveld is the newest addition to the Luther College English Department, joining the faculty as an Assistant Professor in 2013.

In her teaching and in her research, Professor Row-Heyveld is passionate about finding new pathways into unfamiliar worlds, whether that be Shakespeare’s sprawling, squalid London or the tight confines of the mental ward in One Flew Over the Cuckoo’s Nest. A specialist in early modern English drama and disability studies, she is particularly invested in bringing those two interests together, and her research explores the Renaissance roots of disability’s cultural construction, examining representations of fraudulent disability on the stage. Her published work has discussed early modern disability in relationship to religion and literary genre, as well as the pedagogical value of disability studies.

Professor Row-Heyveld is excited to get to introduce Luther students to medieval and early modern literature, especially Shakespeare. She is also excited to be back in Iowa, a state she learned to call home during her graduate studies. Lindsey’s love of words extends even to their visual form, which she expresses through calligraphy. Look for new pieces in her office periodically.

When writers write, they sing, whisper, and shout. This course, an introduction to the English major, emphasizes literature and writing as forms of personal and cultural expression. Our central literary focus is on poetry, but may include fiction, drama, or nonfiction. The course also gives extended attention to student writing as a performative act, conscious of voice, audience, and purpose.

For four centuries Shakespeare has been celebrated as the greatest writer in English. This course will help students more fully understand the power of his plays, both as literature for reading and scripts for performance. Reading plays of each major type (comedies, tragedies, and histories; typically seven to eight plays), we will explore such topics as language, moral vision, gender, politics, and historical context. Students will have the opportunity to explore their interpretations in writing and by staging a scene.

From heroes fighting monsters to Arthurian romances, medieval literature is best known for its stories of chivalry. Less well-known but equally wonderful are the comic tales of sex in trees and greedy friars dividing a fart. We will read Beowulf, narrative poems about love and adventure by Marie de France, the tale of Sir Gawain and the Green Knight, and much more, with in-depth attention to Chaucer’s Canterbury Tales.

English literature came into its own during the Renaissance, as Sidney, Spenser, and Raleigh courted Queen Elizabeth’s favor through love poetry, and sonnets were all the vogue. The period also produced the counter-cultural poetry of Donne and Marvell, and profound religious lyrics of Herbert, and the golden age of English drama with the plays of Marlowe, Shakespeare, and Jonson. The course will explore this rich body of literature through both literary and cultural analysis, with options for a range of student writing.

How could angels in Heaven and humans in Paradise rebel against the God who created the world and made it good? Is it better to rule in Hell than serve in Heaven? What would it be like to live in Edenic bliss, anyway? John Milton sought to answer those questions in Paradise Lost. Second only to Shakespeare in its influence on later writers, Milton’s work probes religion, politics, and gender in a remarkable melding of classical and Christian traditions. We will read this epic, as well as other poems and prose in which Milton engaged the tumultuous events of the English civil wars and its aftermath.

My current research is divided between two projects, both of which explore the representation of disability in early modern England.

The first, emerging from my recently completed dissertation, examines the fear of fraudulent disability in both the literature and culture of early modern England. I trace how changes in social welfare policies motivated by the Reformation instituted a nascent system of disability compensation, and, with it, an increased concern that able-bodied persons would try to pass themselves off as impaired. Fears of feigned disability also shaped, and were shaped by, the theater. Over 30 plays—from standards like King Lear, Bartholomew Fair, and The Changeling to lesser- known works—feature characters that counterfeit blindness, deafness, paralysis, madness, and other impairments. I argue that the theater seized on and teased out fears of fraudulent disability, staging literary fantasies about the nonstandard body and creating social realities for people with disabilities. Early modern playwrights used these performances to debate the nature of disability: some plays use feigned ! impairment to quell the distribution of charity to people with disabilities, while other dramas challenge popular stereotypes and offer fresh solutions for engaging with physical difference. The disability-disguise was a handy tool in the early modern author’s bag of tricks, one that could be used to draw crowds, craft strategic thematic links, smooth out narrative flaws, and play with issues of theatricality, but, most of all, to assert ideas about the nonstandard body that are still influential today.

The second is an anthology of English Renaissance drama (staged between 1580-1642) featuring disability and disability-related concerns as its primary methodological focus. By compiling and editing a range of non-canonical plays that feature the broad spectrum of disability performed on the Renaissance stage, my co-editors and I want to encourage readers, first, to explore the validity and necessity of disability as a component of early modern studies, and second, to consider early modern drama as an important participant in the cultural creation of disability.