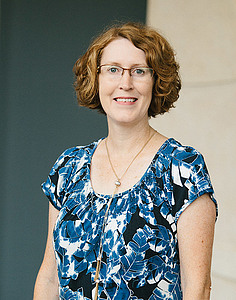 I teach four courses in the psychology department: General Psychology, Animal Cognition, Brain and Behavior, and Learning and Behavior. My research interests include animal cognition and behavioral neuroscience. I study food-storing birds in the Corvid family, investigating their memory and cognitive ability, as well as areas of the avian brain associated with memory and cognition.

PSYC 244: Animal Cognition
This course is an introduction to the study of cognition in animals, including how animals perceive, think, learn, remember, and communicate. We will explore these issues within both psychological and biological frameworks and will include topics such as evolution of intelligence, cognition as adaptation, animal consciousness, and language in apes. An emphasis on comparing animal cognitive processes to human cognition will be part of the course.

PSYC 249: Brain and Behavior
This course will explore the biological basis of behavior through the fields of behavioral and cognitive neuroscience. The focus is on how the brain regulates human behavior, with emphasis on particular psychological topics such as developmental processes, perceptual processes, learning and memory, motivation and emotion, thinking, and disorders; as well as biological topics such as neural communication, neuroanatomy, and neurophysiology. Recent research is discussed in terms of its applications to understanding human behavior and brain disorders.

PSYC 354: Learning and Behavioral
A study of the basic theories, methodology, and findings in the areas of classical and operant conditioning and learning for both humans and animals. Applications, including behavioral modification, will be emphasized throughout the course. Lecture, discussion, and weekly laboratories.

I am interested in studying cognition and intelligence in food-storing birds in the corvid family. I have Clark’s nutcrackers, Western scrub jays and blue jays in my facility. I am interested in three major lines of research.

1) Spatial and episodic-like memory in food-storing birds
I have been studying spatial memory and small-scale navigation in food-storing birds since graduate school in 1992. I have investigated what kind of landmarks or cues food-storing corvids use to find hidden food and how they use these cues (Gould-Beierle & Kamil 1996, 1998, 1999). I have also looked at differences in various forms of spatial memory on an analog radial maze (Gould-Beierle 2000). I have also demonstrated that Clark’s nutcrackers show episodic-like memory after longer retention intervals during cache and recovery of seeds (Gould et al. 2011).

2) Cognitive abilities in birds of the Corvid family
I am currently interested in three major areas within this line of research. 1) Mirror-induced mark-directed behavior: We have demonstrated that Clark’s nutcrackers and Western scrub jays show mark-directed behavior in the presence of a mirror using a procedure similar to the classic mark test used in children and chimpanzees (Gould et al. in preparation). 2) Means-end tool choice: We are currently conducting research looking at whether blue jays understand means-end aspects of using a cloth and a hook as a tool to pull in inaccessible food. 3) Planning: We are currently conducting research to see if Clark’s nutcrackers are able to plan ahead in a food-caching task.

3) Neurobiological aspects of spatial memory and general cognition in the avian brain
I have been studying the neurobiological correlates of spatial memory in the bird brain since my post-doctoral position in 1997. This research includes volumetric analysis of the hippocampus and septum in parids and corvids related to food-storing (Shiflett et al. 2002; Gould et al. in preparation) and season of the year (Gould et al. in preparation), cell density and size analysis in the hippocampus of corvids (Gould and Gilbertson in preparation), and volumetric analysis of a large Substance P terminal field in the parahippocampus of parids (Gould et al. 2001). We are currently looking at Substance P in corvids as well.

Luther psychology majors/minors conduct research with me throughout the academic year and summer. They do this as volunteers, paid research assistants through the dean’s office AAA awards, seniors conducting research for a senior project or recipients of grants through Luther College (Summer faculty/student collaborative research grants) or outside sources (McElroy student research awards). Students who do neurobiological research with me also need to have a good background in biology. Here is a list of some recent student collaborations and presentations: