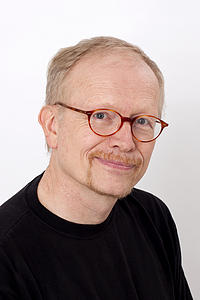 David Faldet enjoys the range of what he does at Luther.

He shares his passion for British literature through courses in Victorian Literature, Twentieth-Century British Literature, and the January study abroad exploration of Tolkien and Lewis. He channels his interest in rhetoric and media into a course on rhetoric, Writing for Media, and his work as faculty adviser to the student newspaper. No teaching commitment better connects to his breadth of interests than Enduring Questions, the common two-semester first-year course that explores a range of readings from Sophocles to Marjane Satrapi.

Designer, writer and socialist William Morris has been the long-term focus of David’s research in Victorian literature. His most recent research looks at the reaction by British writers to the new earth science of the 18th and 19th century. His fascination for regional history and ecology has resulted in numerous newspaper pieces, as well as the book Oneota Flow: The Upper Iowa River and its People (Univ Iowa Press, 2009). His novel King: A Mystery (Resource Publications, 2019) is also set in Northeast Iowa. His work as a poet has appeared in a number of journals.

David enjoys engaging with students in classes, on the newspaper staff, during travel courses, doing collaborative research, and in advising.

Teaching is, for me, an extended conversation. That conversation takes place in class discussion, in office grading sessions and conferences, or working with papers. The teaching in conversation is personal, and it works both ways. See David Faldet’s spotlight video about teaching and learning.

The research that went into Oneota Flow: the Upper Iowa and Its People (2009) fused my interest in ecology and local history with my interest in writing. I continue to research the history and environment of the region. In addition, I research the Victorian period (especially the work of William Morris) and the Arts and Crafts movement in Europe and America. My most recent research in British literature looks at the reaction of some of Britain’s most popular writers (from Mary Shelley to Dickens to H.G. Wells) to the changing geological concept of the earth in the 18th and 19th century.