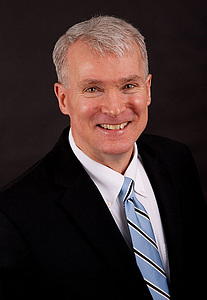 Daniel Baldwin is the head of the Music Department and since 1997 has served as director of orchestral activities at Luther College. Baldwin earned the bachelor of music (cello) degree from Furman University and master of music (cello) and doctor of musical arts (orchestral conducting) degrees from the University of Texas at Austin. Prior to his arrival at Luther College, Baldwin served as director of orchestral activities at Central Washington University (Ellensburg, Washington).

Baldwin received his formal training in string pedagogy as a teacher in the University of Texas String Project, perhaps the most comprehensive program of its kind in North America. Phyllis Young, director of the String Project for 35 years, was Baldwin’s cello teacher during his studies at the University of Texas. He studied conducting with Henry Charles Smith, Cornelius Eberhardt, Sung Kwak, Walter Ducloux, and Fiora Contino.

Baldwin has served as music director of the Central Kentucky Youth Orchestra and the Transylvania Youth Orchestra of the Brevard (North Carolina) Music Center, the largest summer music festival in the South. A 1991 conducting fellow of the Conductor’s Institute of the University of South Carolina and formerly a cellist with the Brevard Music Center Orchestra, Baldwin maintains an active schedule as a clinician, adjudicator, and guest conductor. Since 2007 he has served as musical and artistic director for the Lake Chelan Bach Fest in North Central Washington state.

A study of fundamental gesture, technique, and score preparation. Additional focus is given to oral communication and writing related to the art of conducting and self-evaluation.

The Luther College Symphony Orchestra, Luther’s largest and oldest orchestral ensemble, maintains an active rehearsal and performance schedule during the academic year, from early September to late May. Over eighty student musicians, representing a variety of academic disciplines, perform with Symphony Orchestra.

The Chamber Orchestra specializes in repertoire for small orchestra and mixed chamber ensembles ranging from the Baroque era to the 21st century. In addition to its own concert schedule, Chamber Orchestra performs with the Luther College Opera Workshop.