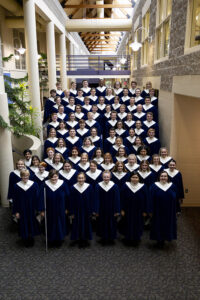 The Luther College Nordic Choir, one of the premier collegiate choral ensembles in the United States, will perform at 7 p.m. Wednesday, June 1, at Decorah Lutheran Church.

Hallie Johnson, Lily Smith, and Abs Trewin from Decorah will be among the performers.

The concert is part of Nordic Choir’s 75th Anniversary Tour. The group was founded by Sigvart Steen and memorably conducted for 57 years by Weston Noble ’43. Previous conductors also include Craig Arnold and Allen Hightower. Since 2017 the choir has been under the direction of Andrew Last, associate professor of music and director of choral activities.

“After a year with no opportunity to tour, Nordic Choir is excited to share music with audiences around the Midwest,” said Last. “As we celebrate the 75-year history of this ensemble, the concert program promises to include something for those who wish to celebrate the past and for those who look forward to the future!”

Audience members can look forward to hearing classical pieces including “Alleluia” by Randall Thompson and “Lost in the Night” arranged by F. Melius Christiansen as well as new music including “The Gift to Sing” by Gregory Berg, commissioned by the Luther College Class of 1970, and “I Won’t Forget” by Zachary L. Moore.

“I Won’t Forget” was commissioned by the Studt Family of Eau Claire, Wisconsin, in memory of Rachel Studt ” ’89 who recently passed away from rare, young onset dementia. Her husband, Larry, wrote the lyrics, and their daughter, Laurel ’22, sings in Nordic Choir and will perform the piece among her peers.

“I would say it’s a very reflective piece,” said Laurel. “It’s a lot about dealing with trials and tribulations of an illness which a lot of people had to go through during the pandemic. Our situation wasn’t specifically related to COVID, but it’s a very emotional piece, just reflecting on the difficulty of the pandemic, not being able to see the people we love and being in that kind of isolation. But it does end up in wrapping up with just being grateful for all of the memories that we’ve been able to make over these past years and the time we get with our loved ones.”

The world premiere of “I Won’t Forget” was at the ACDA Midwest convention in Chicago in February.

Tickets are not required and there is no charge for admission but a a freewill donation will be collected.

The choir tours annually, performing in churches of all denominations, schools and concert halls, including Lincoln Center in New York, the Kennedy Center in Washington, D.C. and the Walt Disney Concert Hall in Los Angeles. Internationally, the ensemble has toured in Germany, Italy, England, Ireland, Scandinavia, the Caribbean, Mexico, Russia and Eastern Europe.