Luther College student, Minh Nguyen ’24, has been named a Rossing Physics Scholar for the 2022-23 academic year. He will receive the top award amount of $10,000 from the Thomas D. Rossing Fund for Physics Education. Each year, the foundation makes a limited number of scholarships available to exemplary students in physics. 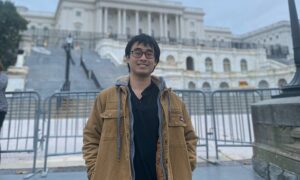 “I was really surprised and happy to win this award. It was the first time I’ve ever won a Physics award, so it feels very special to me,” said Nguyen.

Nguyen, from Ha Tinh, Vietnam, is a double major in math and physics. He said his interest in physics stems from his curiosity of the world around him, especially when it pertains to electricity and magnetism. Rather than accept systems or items at face value, Nguyen has innate curiosity, “I always try to understand how a machine works and know its underlying operations. I love physics because of the wide applications it has to our world. Any forms of rules or formulas will have some form of use to mankind, which, for me, is very compelling,” he said.

After graduation, Nguyen plans to go on to graduate school to pursue either engineering or theoretical physics.

Luther College has a long tradition of producing Rossing Physics Scholars. In the last 10 years, 12 scholarships have been awarded to Luther physics students, which speaks to the strength of the program.

“The fact that we continue to be successful in securing these scholarships for our research students is a fact we are proud of,” said Todd Pedlar, professor of physics. “As one can see from the destinations of our students, these scholarships are a good indicator of excellent outcomes as they move on from Luther.”

Take David Pfotenhauer ’15 for example. He received Rossing Physics Scholarships in 2013 and 2014. After earning his master’s and Ph.D. in mechanical engineering and environmental sustainability from the University of Colorado Boulder, he now works for the Wisconsin Department of Natural Resources as an air pollution and emerging contaminant researcher.

“Upon receiving the scholarship, I started realizing that my passions were contagious and even appreciated. The incredible honor of the Rossing Scholarship seeded in me a desire to pursue a graduate degree and a career in science and science education. Now, on the other side of a master’s degree and Ph.D., I can honestly say that the scholarship altered the course of my life. I now sit at the beginning of my professional career, motivated and confident to continue the discipline of research, education and science communication,” said Pfotenhauer.

Kevin Honz ’18 received Rossing Physics Scholarships in 2016 and 2017. He is currently in graduate school at Penn State University pursuing a master’s degree. After graduation, he hopes to teach the wonder of physics to future generations.

“Physics ignites my curiosity and humility. Why does the sky turn brilliantly red and orange at sunset? Why do helicopters make a ‘taka-taka-taka’ sound when their blades are continuously spinning? Physics helps me ask and answer these questions in wonder, and a physical answer does not reduce the beauty of our natural and engineered world,” said Honz.

“The monetary benefit of being a Rossing Physics Scholar is easily quantifiable. What’s less quantifiable is the personal meaning behind the award. Winning the Rossing Scholarship was incredibly affirming, a statement that I was capable of the things my older peers had done, which I aspired to do myself,” said Weber who is currently pursuing his Ph.D. in physics at the University of Minnesota.

The Rossing scholarship is made possible through gifts from Thomas D. Rossing, Luther College class of 1950, who created the scholarship fund through the Evangelical Lutheran Church in America Foundation. After graduating from Luther, Rossing earned master’s and doctoral degrees in physics from Iowa State University and served as professor of physics at St. Olaf College and Northern Illinois University. Now retired, he is currently a visiting professor at Stanford University.