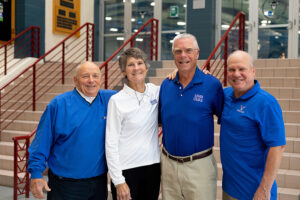 Luther College is preparing for a major renovation of the Sports and Recreation Center (SRC) in 2022. The improvements to the 45,000 square-foot facility include new floor surfacing that combines performance and safety, replacement of the multipurpose netting system to maximize space utilization, and installation of a videoboard to enhance the student and spectator experience. The estimated cost of the project is $1.2 million. To date, more than $1 million has been secured through the generosity of donors.

“We are so grateful to have the SRC. Whether it’s being used by the tennis or track and field teams for indoor training and competition, by the baseball and softball teams for preseason workouts, or by community members walking and jogging inside to avoid the cold winter weather, it has many purposes,” said Renae Hartl, director of intercollegiate athletics. “This building has served us well over the years and now it’s time to make this space more vibrant and functional so people can enjoy it for years to come.”

Along with the renovation project comes the commemorative naming of spaces to honor Luther coaches who have made a lifetime of impact on their student-athletes.

The SRC will be known as the Robert and Ann Naslund Sports and Recreation Center. From a student-athlete to coach to friend and avid supporter, Robert Naslund ’65 has had strong ties to Luther for over 50 years.

“Nas” served at the helm of the football team for 18 years and the track and field team for 12 years, winning 12 Iowa Conference team titles and Coach of the Year honors nine times. He played football and ran track and field at Luther, earning all-conference honors in both sports and the respect of his coaches and teammates. Naslund was a teacher and mentor for Luther students and has maintained relationships with alumni for decades. In retirement, Naslund often drives the Luther team bus and remains a fan of Norse student-athletes and teams.

“Having the Naslund name on the SRC is appreciated and meaningful beyond words for me, Ann, and our family,” said Naslund. “This newly restored center will be very special for all of the people it serves and for all of us who love Luther College.”

Naslund said he fell in love with Luther in the spring of 1960 when he arrived on campus for a visit and met coaches Edsel Schweizer and Hamlet Peterson. He enrolled in the fall of that same year.

“Ever since that 150 pound linebacking “˜Blue Bullet’ and first-generation college farm kid from Cambridge, Illinois, showed up on the Luther campus, there has been a journey full of great stories about the great people at this place! I am eternally grateful to the coaches and athletes who created all of those stories including Rich, Su, and Kirk. It’s an honor to be recognized alongside them. The Sports and Recreation Center has been and will be the source of many great stories to come,” he said.

Naslund expressed overwhelming gratitude to the donors who are making this renovation a reality. “Their extraordinary generosity and support will impact the Luther College family and Decorah community for years to come!” The naming of the facility is supported through a challenge gift from Joe ’80 and Greer Whitters.

“We wanted to donate to this project because we believe students should have a balance between academics and extracurricular activities,” said Joe Whitters. “Luther has seen many great professors and coaches but Coach Naslund did it for so long and so well and continues his commitment to Luther Athletics to this day.”

The tennis courts will be named the Oertel/Leake Indoor Courts in honor of coaches Su Oertel ’72 and Richard Leake.

Oertel retired in 2006 after an impressive 31-year coaching career as the head women’s tennis coach beginning in 1975. With a dual meet record of 383-189, Oertel was one of the best known and most successful coaches in the college’s history. She guided the Norse to four AIAW Iowa State Championships in five years and an unmatched 23 of 24 Iowa Intercollegiate Athletic Conference women’s tennis championships. The women’s tennis team won 19 consecutive IIAC titles, 17 of them with Oertel coaching on site. Oertel was named Iowa Conference Coach of the Year for Division III Women’s Tennis 12 times and in 1992, she was voted Intercollegiate Tennis Association’s National Coach of the Year in Division III women. Her student-athletes made 10 trips to the NCAA Division III national team tournament and 13 trips to the NCAA III national individual tournament.

“What a tremendous honor this naming is. I got to work in a beautiful facility that I loved, with people I loved, at a college that I love,” said Oertel. “Playing on tennis courts taped to the basketball floors and practicing in the gyms at 6 a.m. or 10 p.m. when it was available, we all excitedly watched the much-needed SRC facility being built in 1991. I want to thank those who contributed to the updating of the SRC project. The renovation of this space will update an already tremendous facility by making much-needed, sport-specific improvements. To be identified with Luther College as a student-athlete and coach and now, with my name on the indoor tennis courts with Rich are tremendous honors. Go Norse!”

The joint naming of this space symbolizes the relationship between Oertel and Leake who worked closely with and supported each other during their coaching careers. Leake coached the women’s tennis team in 1984-85 while Oertel was pursuing her doctoral degree. That year, the team won the Iowa Conference Championship and Leake was named Coach of the Year.

Leake was the head men’s tennis coach from 1975-83 and 1985-2001. He led the Norse to 11 Iowa Conference Championships that included a string of eight consecutive titles from 1988-1995. He coached eight Iowa Conference MVPs, one three-time NCAA III All-American, 56 conference singles champions, and 53 conference doubles champions. During his time as men’s head tennis coach, he was selected Iowa Conference Coach of the Year 12 times and completed his career with a dual meet record of 270-209.

“It is an unbelievable honor to be recognized alongside these great Luther coaches and athletes,” said Leake. “I am very grateful for the donors who are making this top-notch facility possible. The renovation of this indoor space should be a real boost to the recruitment of tennis and track student-athletes. Although the current facility has served Luther College well for 30 years, it is time for an upgrade and a facelift. I could not be more pleased that Luther is investing in its athletic program with this new facility.”

As part of the renovation, the indoor courts will be reconfigured to include four doubles tennis courts.

According to Neubauer, Naslund was instrumental in his decision to attend Luther.

“During my senior year in high school, Coach Naslund made the effort to visit my home on the farm in Iowa Falls to better acquaint me with Luther. Coach Naslund convinced me, as well as my parents, that Luther was a special place. Having him as my track coach for four years and running on four conference championship teams under his leadership was a privilege.”

Neubauer said that when he was informed that the new track would be named in his honor, he was “taken aback” and wants all of the student-athletes he coached over the years to know that this naming is a collaboration of all of their efforts. He also recognizes that the new track was made possible through a generous donation.

“Although the family who supported the track renovation wished to remain anonymous, I know their financial commitment to Luther over the years has been phenomenal, and we thank them once again for their generosity! Coaches Naslund, Oertel, Leake, and I were all members of the Luther Athletic Department staff during the same era, so sharing the excitement of the SRC renovation with them is especially gratifying.”

Neubauer hopes that, along with being an incredible setting for training and competition, Decorah community members will utilize the track for health and fitness initiatives, especially when inclement weather interferes with exercise.

Fundraising continues for the SRC renovation project, and gifts and pledges of all sizes are appreciated. Multiyear pledges may be fulfilled over three years. All gifts of $10,000 or more qualify for recognition on the donor wall in the facility. For more information on ways to support this project, call the Development Office at (800) 225-8664 to speak with a development officer. For more information visit luther.edu/giving/priorities/sail-norse/src/.