The concert is the final performance in Nordic Choir’s 2023 Spring Tour which included stops in Iowa, Wisconsin, Arizona, Nevada, Missouri and Minnesota. 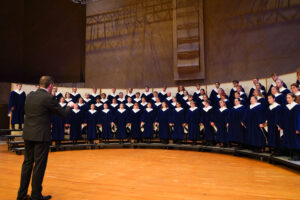 “This year’s tour program is exciting to say the least,” said Last. “We celebrate the many ways we express joy, we express emotions that often feel ‘other-worldly,’ we reconcile how we love through grief, and we bring to life a few of the stories in the Bible. From Heinrich Schütz and Sethus Calvisius to Susan LaBarr, Ken Burton and Eric Whitacre, this will be a feast for all choral music lovers.”

This concert is open to the public with no charge for admission. It will also be livestreamed on the Luther College Music Department’s YouTube channel.

“In 2022, the choir celebrated its 75th anniversary, we now embark on our next 75 years of making music at the highest level. The diversity of people and academic majors bring life and energy to an ensemble that shares a passion for singing,” said Last.

The Luther College Nordic Choir was founded by Sigvart Steen and memorably conducted for 57 years by Weston Noble ’43. Previous conductors include Craig Arnold and Allen Hightower. Since 2017 the choir has been under the direction of Andrew Last, associate professor of music and director of choral activities. He is a 1997 alumnus of Luther College, earned a master’s degree in choral conducting from Northern Arizona University and a doctor of musical arts in choral conducting from the University of Nebraska—Lincoln School of Music.

The choir tours annually, performing in churches of all denominations, schools and concert halls, including Lincoln Center in New York, the Kennedy Center in Washington, D.C. and the Walt Disney Concert Hall in Los Angeles. Internationally, the ensemble has toured in Germany, Italy, England, Ireland, Scandinavia, the Caribbean, Mexico, Russia and Eastern Europe.