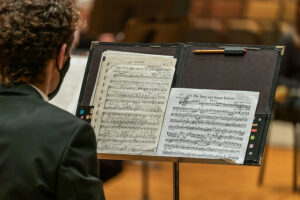 The Luther College Concert Band, one of the Midwest’s touring collegiate wind ensembles, will present their Homecoming Concert at 7:30 p.m. Tuesday, April 12, in the Center for Faith and Life Main Hall.

Among the performers are Lily McGohan and Meg Sessions from Decorah.

The concert comes after several tour stops in Long Lake and Rochester, Minnesota and includes pieces by Cait Nishimura, Erika Svanoe and Karl Husa. The event is open to the public with no charge for admission.

The Luther College Concert Band was formed in 1878, laying the foundation for what would become the college’s long-standing tradition of musical excellence. Directed by Cory Near, Concert Band is one of the oldest touring groups in the nation and ranks among the country’s outstanding undergraduate college bands.

Throughout its long history, Concert Band has enjoyed performance opportunities in the United States, Western Europe and Japan. The ensemble tours annually, including an international tour every four years. In 2013, the band toured Iceland and Norway, 100 years after its first Norwegian tour. In 2017, the ensemble traveled to Spain. The next international tour for Concert Band will occur in 2025.