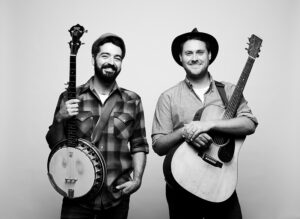 At 2 p.m. Saturday, April 23, the Luther College Center Stage Series presents GRAMMY award-winning bluegrass duo, The Okee Dokee Brothers. Families are invited to come to campus an hour early at 1 p.m. to enjoy activities planned by students from the Center for Sustainability Communities in celebration of Earth Day.

The Okee Dokee Brothers are Joe Mailander and Justin Lansing who grew up in Denver, Colorado, and have known each other since they were three years old. Their passion for the outdoors has been at the forefront of their original and inspiring Americana Folk music, beloved by children and adults alike.

“The Okee Dokee Brothers make family music, not just kids’ music. Their songs are catchy, smart, uplifting and appealing to all ages,” said Kristen Underwood, director of campus programming. “I’m excited to host them at Luther close to Earth Day because their songs come with such great messages about our relationship to nature and the value of getting outdoors.”

Mailander and Lansing believe that, through their music, they can motivate kids to have respect for their communities, the natural world and themselves. They encourage everyone to explore the world around them and interact with nature.

The Okee Dokee Brothers are five-time Parents’ Choice Award winners and have been called “two of family music’s best songwriters.” Their album “Can You Canoe?” won the 2013 GRAMMY for Best Children’s Album, and their subsequent releases have received high praise from sources including NPR, USA Today, The New York Times and the Chicago Tribune which stated “these are songs that encourage kids to find happiness with fewer material possessions and embrace adventure even in trying situations. Without getting preachy or heavy-handed, Mailander and Lansing come off like happy, kind and fun big brothers eager to show their younger siblings how to have an ethically sound and green-conscious good time.”

The performance is sponsored by Lynne Sootheran and Kent Simmonds.

Tickets are on sale through Luther’s Ticket Office, online at tickets.luther.edu, by emailing tickets@luther.edu or by calling (563) 387-1357.