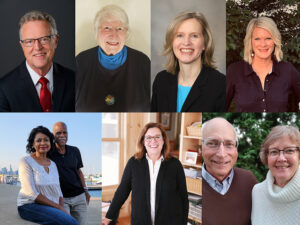 Luther College President Jenifer K. Ward is proud to announce the 2021 recipients of the Distinguished Service Award. The award is presented to alumni or individuals with strong connections to Luther College who have exhibited admirable service to society in areas such as education, government, the arts, business, church, labor, industry, agriculture, research, medicine and community affairs.

Afdahl’s 50-year career as a church musician, organist, conductor and composer has taken him from Michigan to St. Paul. In 1991, he moved to Rochester, Minnesota, where he served 28 years as director of music and organist at First Presbyterian Church. He retired as director of music emeritus in 2019.

Afdahl has been a conductor and clinician for handbell, choral and church music conferences nationally and internationally. He is a past president of the Handbell Musicians of America and represented the organization as a conductor at the International Handbell Symposia in Australia in 1994, the United Kingdom in 2012 and South Korea in 2014.

Afdahl is an active organ recitalist, published composer, and arranger of handbell, instrumental, and choral music with over 100 compositions and arrangements in print. He continues to volunteer time for the American Guild of Organists, Choristers Guild, Handbell Musicians of America and the Rochester Music Guild. Prior to retiring, Afdahl organized an extensive free concert series for 28 years, and additional seasonal recitals to serve the Rochester community.

Afdahl and his husband, Van Jacobsen, are the parents of two adult children, Natalie and Evan.

Denise and Michael met at Luther College and have made Winona, Minnesota, their home. Despite still working full time, Michael as a respected attorney and Denise as a sports medicine rehabilitation technician with Gundersen Health, the pair makes time to serve others.

As committed members of Central Lutheran Church for more than 40 years, both have held many leadership roles in the congregation; Denise currently has a seat on the Refugee Resettlement Committee, and Michael on the Foundation Board. Both have served the Winona Public Schools, Denise as President of the PTA, and Michael as chair of the school board.

They are a team. According to their nominator “ask either one to fulfill a need and they are there with professionalism and expertise…always looking at their efforts to be guided towards the needs of others.”

The duo also serves the local Warming Center for the Homeless, the Winona Community Foundation, the Family YMCA and the Winona County Historical Society.

In association with the Winona Rotary Club, Denise and Michael have opened up their home to exchange students over many years, even taking in students when a host family and student could not make it work. They have also played pivotal roles in Rotary’s annual road bike tour, “Ride The Ridges,” since the event’s inception. The ride attracts hundreds of visiting cyclists who enjoy the scenic beauty of southeast Minnesota and the Mississippi River bluffs every fall.

They are the parents of two adult children, Greta ’05, a fourth-generation Luther graduate, and Karl . They also have one grandchild.

In 1960, Johnson was the first female guide to lead an all-girl trip at Wilderness Canoe Base where she worked with David Johnson, who she would later marry. In the 1970s, she was a dean of students at Luther Seminary when 84 women enrolled with no promise they would ever be ordained.

As a social worker and family therapist, Johnson has provided hours of connection and support to people. In addition, she has hosted invaluable immersion experiences for hundreds of Luther sociology students over the years, first in partnership with Professor Ken Root, and for the past 26 years with Professor Char Kunkel. Through eating at soup kitchens; visiting homeless shelters, clothes closets, Native American and Somali community centers and charter schools; and sleeping on church floors, Johnson insists that students get to know the community. She is a bridge between people and a friend to so many.

Johnson’s son, Eric (Luther class of ’94) died in 2003. The Erik Paul Nils Johnson Scholarship was established in his honor. 19 Luther students have benefitted since its inception.

Dr. Maclaughlin is an associate professor of family medicine at the Mayo Clinic College of Medicine and Science and a population health science scholar at Mayo Clinic’s Kern Center for the Science of Health Care Delivery.

MacLaughlin’s research has focused on disparities in cervical cancer screening and on improving HPV vaccination rates to reduce HPV-attributable cancers in women and men. Her work has been featured in TIME.

She has served as the guidelines expert in the development and implementation of a clinical decision support system for cervical cancer screening and management at Mayo Clinic as part of an AHRQ grant. Related to that work, she serves as a subject matter expert for a CDC workgroup developing a similar tool. MacLaughlin was the only family medicine physician on a national workgroup charged with updating cervical cancer screening recommendations for immunocompromised women.

The Minnesota Academy of Family Physicians named MacLaughlin the recipient of the 2021 MAFP Innovation & Research Award. She and her husband, Michael Augustin ’90, live in Rochester, Minnesota, and enjoy time with their two young adult children, Joshua and Emily.

Mineck has truly moved the needle in driving systemic change to address the social determinants of children’s health. Known for her vision and ability to build bridges, she has a gift for bringing disparate parties together and mobilizing them to achieve measurable progress.

As president and CEO of the Mid Iowa Health Foundation in Des Moines, Iowa, Mineck has a servant’s heart and lives to help others. Recognized as a national leader among health philanthropists, she is looked to by her colleagues across the country for her perspectives and advocacy.

Mineck was included on Business Record’s “40 Under 40” in 2012 and more recently she was named the 2021 Women of Influence Honoree by Business Record.

She has had a seat on Luther’s President’s Advisory Council and on the board of the Vesterheim Norwegian-American Museum. Currently, she serves on the board of trustees for the Harwood Institute, the Science Center of Iowa, Polk County Housing Trust Fund and the Iowa Council of Foundations.

The Corey and Suzanne (Roverud) Mineck Scholarship was established at Luther College in 2010. Mineck and her husband, Corey, live in Waukee, Iowa, with their two teenage daughters, Mari and Bryn.

Arlivia and Will Williamson came to Luther College in the midst of the Civil Rights Movement. They helped to create the foundation of the Black Student Union that celebrated its 50th anniversary in 2019. Arlivia and Will have had a positive impact in their community with lives of service and selflessness since graduation.

Arlivia was a dedicated teacher from 1973 to 2011. She was an Amoco Scholarship Program recipient at National Lewis University to improve science education in Chicago’s schools. Arlivia was also a trainer for the Kids at Hope program which is based on the fact that all students are capable of success, no exceptions!

While working as an engineer and executive with AT&T, Will was given the Alex Award, Illinois Bell’s Community Service Award. He was also president of the National Technical Association. Currently, Will is a broker and independent financial services agent. He also serves on the Attorney Registration and Disciplinary Commission of the Supreme Court of Illinois.

Arlivia and Will have both served as leaders at Windsor Park Lutheran Church for over 40 years, in nearly every role including as presidents of the congregation. Arlivia also served on the Lutheran Campus Ministry Board for Illinois and Will chaired the Multi-Cultural Committee of the Metropolitan Chicago Synod. Other organizations the pair have supported include Rotary International, the area food pantry, Green Communities Connections and the Luther College Black Alumni Association.

They are parents of six sons including four of their own, Ian, Ivan, Eli ’02 and Eliot ’06; and two who were welcomed into the family during their high school years, Benjamin and Nicholas. They have 10 grandchildren.

Weeks Duncanson’s service to Luther College began as the student representative on the search committee for President H. George Anderson. After graduation, she worked as a legislative aide to Minnesota Senator Rudy Boschwitz in Washington, D.C. Later, a fellowship at the University of Minnesota’s Humphrey School of Public Policy further honed her policy skills.

More recently, as an agricultural consultant, Weeks Duncanson helps the nation’s farmers and market leaders collaborate on data-driven conservation and sustainability planning and practices. Now, as an advisor for the Meridian Institute and the Environment Defense Fund and as a trustee with The Nature Conservancy, she is a leading advocate and a voice of reason for agricultural sustainability and international trade at national and international food and climate forums. She also spends time in the halls of Congress discussing in detail Trade Promotion Authority, the farm bill, biodiesel and climate change.

In her community, Weeks Duncanson is a board member for Feeding Our Communities Partners, is active in St. John’s Lutheran Church, serves on the Southeast Minnesota Synod Candidacy Committee and is vice chair of the Mankato Area Foundation Board of Directors.

She is a farmer and partner at Highland Family Farms in Mapleton, Minnesota, along with husband, Pat. They are the parents of four adult children, Ben ’11, Claire, Samuel, and Gabriel, and have three grandchildren.