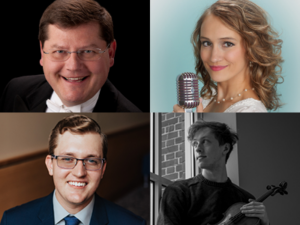 Timothy Peter ’86 is the recipient of the 2021 Weston Noble Award. Weston Noble served on the music faculty at Luther College from 1948 to 2005. During that time, the college grew in numbers, in national reputation, and Noble became a leader in training trailblazers in the field of music education. Established in 2004, the Weston Noble Award recognizes music educators who honor and continue Noble’s legacy.

During the Homecoming Concert at Luther College on Oct. 1, Brad and Beth Holmes, who serve on the choral faculty at Millikin University and who are former choral faculty at Luther, addressed Peter and said “so much of what Weston stood for is embodied in your work; the bringing together of all kinds of people, the belief that wholeness can be found in a well-tuned chord, and the understanding that singing is a gateway to the unseen, the transcendent…You are not a Weston-clone but you certainly are offspring of one who gave so much to all of us who believe in the power of singing together in concord.”

Peter is now a professor of music and director of choral activities at Stetson University. A Minnesota native, he received his bachelor’s degree from Luther College and completed his master’s and Doctorate of Musical Arts degree at the University of Arizona. Before teaching at Stetson University, he was a professor of music at Luther College, a member of the choral faculty, and served as the head of the music department.

Peter has prepared choirs and orchestras for performances at Carnegie Hall in Manhattan, Singapore SAS Concert Hall, Orchestra Hall in Minneapolis, Orchestra Hall and Rockefeller Chapel in Chicago, the Georgia Dome in Atlanta, the Holland Center in Omaha, the TWA Center in St. Louis, the Overture Center in Madison, the Alamo-Dome in San Antonio, and the Seoul Foreign School Center for the Performing Arts. He has also conducted in Singapore, Germany, England, Namibia, Oman, South Africa, and South Korea.

“I am truly honored by this recognition. Striving for excellence is a trait that was enhanced during my time at Luther and has carried through in all I have done – from the classroom to the stage, to television, and a Warner Brothers movie,” said Busta Lange. “During my childhood years, college experience, and professional career, patience and a good work ethic have been instilled in me. I am forever grateful for the lessons I have learned, which in return have presented many opportunities for me to share the gift of  music.”

Busta received her Bachelor of Arts degree in music at Luther College and her Master of Instruction degree from St. Mary’s University of Minnesota. Busta has shared her love of music through teaching children of all ages and she has served as an adjunct voice faculty member at St. Mary’s University, leading college-aged vocal students through their studies.

Though Busta continues to teach privately and leads music workshops in schools, she has primarily focused on performing. This has led to a national TV show, “Mollie B Polka Party,” airing for over ten years; a role and a music composition in the Clint Eastwood movie, “The Mule;” numerous awards and induction into multiple halls of fame; “Mollie B Christmas Shows” in Branson, Missouri and Reedsburg, Wisconsin; hosting Wisconsin Public Television’s “Polka” documentary; performing in over 30 states and eleven countries for many sold-out performances; annual appearances on cruises and tours; performing on and producing the “Mollie B Variety Show” on YouTube that reached five million views within 16 months; producing and performing on 28 recordings; and performing on 14 additional recordings as a guest artist.

Kaleb Krzyszton ’21 is the 2021 recipient of the Presser Scholar Award. The Presser Scholar Award was established in 1939 by the Presser Foundation in honor of Theodore Presser, the publisher of The Etude, a magazine dedicated to music, and founder of the music publishing firm bearing his name. The award, funded by a monetary gift from the Presser Foundation of Haverford, Pennsylvania, is presented annually to a current Luther music major chosen by a music faculty vote by consideration of excellence and merit.

Krzyszton, a senior from Waumandee, Wisconsin, will graduate from Luther in 2021 with a Bachelor of Arts degree in music education. After finishing his studies in December, he will continue to prepare for a career as a band teacher with a semester of student teaching. His primary instrument is the euphonium.

Krzyszton’s time at Luther has been shaped by heavy involvement in music ensembles and organizations and a desire to gain the skills, knowledge, and experience necessary to best serve his future students. He is currently in his fourth year in the Luther College Concert Band (his third as the principal euphonium), his third year in the Nordic Choir, and his second year as the second trombone in the Jazz Orchestra. He is the director of the Luther College Gospel Choir, a member of the Pep Band Leadership Team, and the Iowa Bandmasters Association Chair of the Luther College Future Music Educators Association.

His early love of music was fostered by his family and his childhood piano teacher. This early love of music transpired into a lifelong passion with the encouragement of his music teachers and other high school teachers. He especially thanks the Luther music faculty. From applied lesson instructors to ensemble directors and classroom professors, their tremendous support of Krzyszton throughout his college career has propelled him to become the musician, scholar, and educator he is today.

Gibson (Gibby) Swalley ’21 is the 2021 recipient of the Hemp Prize. The Richard C. and Joann M. Hemp Family Prize for Orchestra Performance is given annually to a senior member of the Luther College Symphony Orchestra. The $8,000 scholarship is funded through an endowment established by Richard ’64 and Joann (Harr) Hemp ’65. Richard Hemp is a regent emeritus, former chair of the Luther College Board of Regents, and former interim president of Luther College. The auditioned prize awards students of exceptional performance, talent, musicianship, and leadership.

“In his own quiet way, Gibby has been a leader in Symphony Orchestra since he enrolled at the college in 2018. He is a fabulous musician and a person of great kindness, character, and integrity,” said Daniel Baldwin, head of the Luther College music department.

Swalley started playing the violin in fourth grade. At Roseville Area High School, he was an active member of his school orchestra and received the Music Educators Scholarship Award in 2018. Swalley studied at the Artaria Chamber Music School in 2017-18. Recently, Swalley appeared on Classical MPR’s “Friday Favorites” with Steve Staruch. Swalley now has his own radio show on Luther’s station, KWLC.

His time in the Luther Symphony Orchestra has taught him that music is a craft of hard work, attention to detail, and, above all, teamwork. After his graduation, he plans to pursue a master’s degree in violin performance.