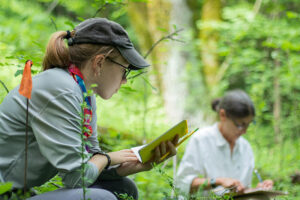 Algific talus slopes are hard to find. In fact, northeast Iowa is one of the few regions in the world where these geological features exist. Luther students Jill Richards ’22 and Annalise Meyer ’23 partnered with faculty member Beth Lynch to take a microscopic look at the native plants living on these slopes in a first of its kind study to understand how the plants will fare as the world warms.

With algific meaning “cold producing” and talus slope referring to a collection of broken rock, algific talus slopes are made up of limestone that retains ice and emits cold air throughout the growing season. These north- or east-facing slopes create their own small and fragile ecosystems that are home to a very rare and specific set of plants and species.

“If we are able to identify plants that live in these cooler regions and need that specific climate, we could potentially identify plants that are in need of protection with global warming and what’s going to happen with these plants as the climate slowly gets warmer and warmer,” said Meyer.

Some herbaceous plant species found on these slopes are glacial relics, meaning a population of cold-adapted species that occurred during the ice age. Tunnels formed by ice vents allow cool air to seep through which makes the slopes much cooler than the surrounding forest. These conditions allow these plants to persist under today’s warmer climatic conditions.

“Nobody has ever collected baseline data at the places we’re looking at! Working with the species that are endangered and in peril is hard. I get kind of emotional because there’s no real tangible way to just scoop them up and save them,” said Richards.

Managed in part by the U.S. Fish and Wildlife Service, this research project was conducted at two permanent monitoring sites located in the Driftless Area National Wildlife Refuge (DANWR), specifically in Finch Memorial Forest and near the Turkey River. The goal was to collect baseline data against which future changes in microclimate and vegetation can be measured. The data includes soil temperatures and air temperatures near the soil surface and the abundance of different plant species. This information will help the U.S. Fish and Wildlife Service to determine if algific talus slopes can buffer cold adapted plant species against future warmer regional temperatures.

In addition to measuring temperatures and the abundance of herbaceous plants, the group also collected moss samples from each study site to identify. According to Lynch, mosses are difficult to identify and to do so requires looking at their cell structures underneath a microscope.

“When you’re out in the field you just see it and think all moss is the same but once you take a closer look, it’s like another world underneath your feet!” said Richards.

It’s that kind of realization and learning that comes about through hands-on learning experiences like these.

“When I was a biology student, the real learning that happened for me that prepared me for my career was the learning that happened in places like this where you are in the field and faced with real research problems and you’ve got to solve them,” said Lynch. “These students got to spend eight weeks focusing only on this research. This is the real thing, the data we are collecting is going to be published someday and to be able to participate in that is going to teach them so much about what being a biologist is.”

This research is the first to describe these plant communities, including mosses, in a quantitative manner. Previous studies have made lists of plants, but they do not include estimates of their abundance nor do they correlate the presence of particular plant species with fine-scale patterns in temperatures across individual slopes.

This research is a part of Luther’s Summer Student/Faculty Collaborative Research program which provides opportunities for students to engage in collaborative research projects with Luther faculty members. It is a chance for students to develop their research skills; actively learn in Luther’s natural areas, precision labs or independently; and it provides an opportunity to dig deep and gain expertise in a specific facet of a larger field of study.

Thanks to a generous grant from the Monticello College Foundation, this research project will continue during the 2021-22 academic year.