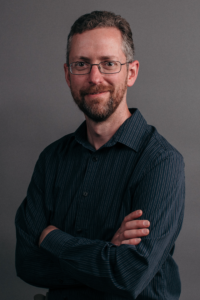 During Severtson’s time at Luther, he established himself as an exceptional musician, solo and collaborative artist, and an impressive scholar. He set the bar high for his classmates, which included Andrew Last, director of choral activities and associate professor of music at Luther. Last presented Severtson with this award at the Homecoming Concert on Oct. 9.

“For many of us, Kirk set the standard for excellence in the department,” said Last. “Yet, he is also just a wonderful human. He has a great sense of humor and is very down to earth. I’m a better musician today because of Kirk’s influence on our class at Luther.”

Severtson began his teaching career in 2001 at The Crane School of Music at SUNY Potsdam. He joined the faculty as a lecturer and by 2014, he had worked his way up to a full professor of music. As musical director of the Crane Opera Ensemble, Severtson coached singers and pianists, and taught classes in art song repertoire and accompanying. In 2019, he was appointed professor of voice at the University of Michigan serving as a vocal coach and conductor of the opera program.

Over the years, Severtson served on the music staff at numerous opera companies including The Dallas Opera (including three world premieres), Lyric Opera of Kansas City, The Atlanta Opera and eleven seasons with Opera Saratoga. He has conducted and coached all over the world including at the Hawaii Performing Arts Festival; Opera Viva in Verona, Italy; the Opera Theater of Lucca in Italy and the Cincinnati Opera Outreach Program. Currently, Severtson serves as the executive director of the National Opera Association.

In speaking to Severtson, Last said “in looking over your professional achievements, I’m confident I could highlight dozens and dozens of awards, masterclasses and recitals. Your humility and desire to always put people first have left a lasting impact on each and every one of your students. Thank you for your contributions to music education and honoring Luther College throughout your teaching career for many, many years to come.” 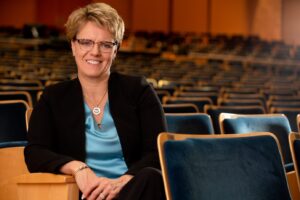 Jennifer Boomgaarden Daoud ’97 is the recipient of the Dr. Carlo A. Sperati Award. Dr. Carlo A. Sperati, a pillar of Luther College and the Lutheran music tradition, was the conductor of the Luther College Concert Band for 38 years until his retirement in 1943. His work ethic, and demand for perfection and patience when working with music students are part of the identity of the Luther College Music Department to this day. This award recognizes those traits in music educators as they follow in Sperati’s footsteps.

Majoring in trumpet performance at Luther, Boomgaarden Daoud went on to complete a master’s degree in orchestral conducting from Northern Arizona University. Her first job was at Omaha Area Youth Orchestras where she served as the associate conductor.

While in Omaha, Boomgaarden Daoud found her way onto the Omaha Symphony team, initially as a part-time fundraising assistant and eventually becoming vice president of education and community engagement and staff conductor. In recognition of her leadership and passion for music and education, Boomgaarden Daoud received the Omaha Public Schools A+ Advocate award, the Nebraska Governor’s Emerging Leader in the Arts award and the Leonard Bernstein Award for Education Programming.

Discovering that she could make a significant impact as an administrator, Boomgaarden Daoud became the executive director of the South Dakota Symphony Orchestra in 2010. During her tenure, the orchestra was awarded two ASCAP awards for its commitment to new American music and its innovative programming as well as the Bush Prize for Community Innovation. In 2015, Boomgaarden Daoud received the Helen M. Thompson Award from the League of American Orchestras for exceptional leadership, dedication and accomplishment in the field of orchestra management. She was appointed Omaha Symphony president and CEO in July 2018.

Boomgaarden Daoud has said that she genuinely believes her Luther education prepared her for the myriad of opportunities life has presented. She advises current students to seize every opportunity Luther offers. For her, these transformational opportunities included the Luther orchestra residency in Vienna in 1996, which ignited a lifelong love of travel, and the Concert Band’s 1997 trip to Japan, which sparked a curiosity about cultures that now shapes her views of the role of music in our society.

The award was presented to Boomgaarden Daoud by Cory Near, director of bands and assistant professor of music at Luther. He said “Jenn, it is clear your love, passion and dedication to the music community has not changed since you walked these very halls. From the faculty, staff and students of Luther College, we congratulate you on all of your accomplishments and we are proud to name you the recipient of the 2022 Carlo A. Sperati Award.” 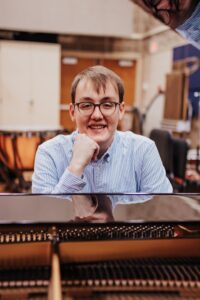 Eric Head ’23 is the recipient of the Presser Scholar Award. The Presser Scholar Award was established in 1939 by the Presser Foundation in honor of Theodore Presser, the publisher of Etude music magazine and founder of the music publishing firm bearing his name. The award, funded by a monetary gift from the Presser Foundation of Haverford, Pennsylvania, is presented annually to a current Luther music major chosen by a music faculty vote by consideration of excellence and merit.

Head’s passion for music began at the age of eight when he took an immediate interest in the piano. Fast forward to his time at Luther, Head is a member of the violin section in Symphony and Chamber Orchestras. He also sings in Collegiate Chorale and is deeply involved with collaborative piano, accompanying various vocal and instrumental studios, lessons, ensembles, recitals, and opera scenes and productions.

Head, a senior from Fairmont, Minnesota, will graduate from Luther in 2023. After graduation, he hopes to attend graduate school to study collaborative piano or he may pursue work in arts administration with an opera or orchestra company.

“I feel so incredibly honored to receive the Presser Scholarship this year,” said Head. “I am continuously grateful to the teachers, mentors and collaborators I have had whose guidance has allowed me to get to this point. The Luther Music Program has come to be one of the most important aspects of my life. It seems like every day I get to experience a new musical discovery or form a new friendship. I will cherish the personal and musical connections I’ve made at Luther for a lifetime.”

Head was the winner of the Rosholt Distinction in Accompanying award in 2021 and 2022. He also won the music department’s Concerto Competition in 2021. He is looking forward to the Symphony Orchestra’s month-long Vienna residency in January.

Rob Clower ’23 is the 2022 recipient of the Hemp Prize. The Richard C. and Joann M. Hemp Family Prize for Orchestra Performance is given annually to a senior member of the Luther College Symphony Orchestra. The $8,000 scholarship is funded through an endowment established by Richard ’64 and Joann (Harr) Hemp ’65. Richard Hemp is a regent emeritus, former chair of the Luther College Board of Regents and former interim president of Luther College. The auditioned prize awards students of exceptional performance, talent, musicianship and leadership.

Clower has played the oboe for more than 12 years. He is a senior who came to Luther from Grinnell, Iowa. In high school, he was very involved in music. As a true student of music, Clower is thankful for the guidance he received from his local orchestra conductor, Eric McIntyre, high school band director, Levi Dressler, and high school choir director, Roger Henderson, a Luther graduate who received the Weston Noble Award in 2015. Heather Armstrong, associate professor of oboe and music theory at Luther, remembers meeting Clower for the first time in 2016 when he attended a Dorian Summer Music Camp.

“I was impressed with his curiosity, love of music and desire to develop as an oboist. In fact, Rob was so enthusiastic about improving as an oboist that he asked if he could record me explaining a practice strategy I gave him in one of those Dorian lessons so that he wouldn’t forget it when he went home! I was delighted when Rob returned to Luther several years later to study music here. He has been a leader in the orchestra and in the oboe studio, and his enthusiasm for music, pursuit of musical excellence and generous support of others are an inspiration to all of us.”

Clower plays oboe in Symphony Orchestra and Chamber Orchestra. He also sings in Collegiate Chorale and in the a capella group, Undeclared. Clower is majoring in music with a German minor. After his graduation in 2023, he plans to pursue a career in oboe pedagogy, orchestral music and music education and outreach.

“I am honored and grateful to have received an award for something that I love so much,” said Clower. “There is no other institution that combines musical excellence with community, social responsibility, and love in the way that Luther’s music department does–it is a singular place. My friends here inspire me to grow as both a musician and a person, and the faculty are invaluable mentors and teachers. I’m particularly inspired by my music education classmates here. They are some of the best musicians and most uplifting people I will ever know. I hope that wherever I work later in my life has commonalities with Luther’s culture, and it is a joy to be a part of it now.”