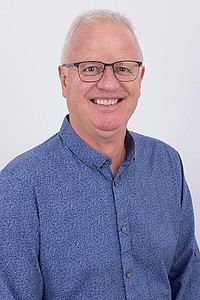 Scott Carlson has been a professor in the biology department since 2000, and he regularly teaches Human Physiology, Neuroscience, Neuroscience Seminar, and General Biology. He is also involved with a January-term course, located on the island of Roatan, Honduras, that explores how individuals can engage ethically with social and environmental challenges in the developing world.  While his research has primarily centered on neural control of blood pressure and mechanisms that contribute to the development of hypertension, more recently he has focused on setting up an electrophysiology program in support of the newer Neuroscience major. He is also involved with formation of the new Global Health major at Luther College.

I have a great wife and three kids. I enjoy home design and landscaping, along with a strong interest in music and coffee.

Cells serve as the building blocks of all biological systems, so understanding cellular biology is critical to comprehension of life systems. This course examines the structural and chemical composition of cells, processes related to cellular metabolism and homeostatic control, and genetic concepts related to protein formation, genetic replication and patterns of inheritance. Laboratory methods reinforce concepts and increase students’ ability to design experiments, analyze data, and communicate results in written form.

The course explores the means by which neurons function and how they form circuitry related to sensory input, motor control, and higher cognitive functions. A second component of the course is devoted to the role of primary literature within the field of neuroscience, including how hypotheses are formulated, tested, and the results conveyed to the scientific community.

My research has examined a number of areas related to this topic, including how the brain detects sodium ingestion and the synergistic relationship between the hormone angiotensin and dietary sodium.

My newer research has moved from a neural focus to a vascular one. My most recent research has examined the role of vascular 20-hydroxyeicosatetraenoic acid (20-HETE) in high blood pressure. 20-HETE is derived from the metabolism of arachidonic acid by the enzyme cytochrome P450, which results in formation of multiple metabolites.

While many of these metabolites appear to exert an action on vascular smooth muscle, 20-HETE demonstrates the strongest effect, causing constriction of the blood vessels that reduces flow to that region and leads to an increase in blood pressure.

20-HETE is also of great interest as cytochrome P450 levels are overexpressed in the Spontaneously Hypertensive rat (SHR), which is a commonly used hypertensive rat, causing an increase in 20-HETE formation and potential increase in vascular constriction.

While the majority of research has focused on renal 20-HETE on altering blood vessels in the kidney, other studies have demonstrated elevated 20-HETE in additional vasculatures (e.g., the liver and gut, cerebral circulation and in skeletal muscle). Thus, 20-HETE may exert a more widespread systemic vascular action in SHR.

Students in my laboratory have utilized state-of-the-art technologies, including chronic telemetric monitoring of heart rate and blood pressure as well as laser Doppler flowtometry, to examine the effect of inhibiting cytochrome P450 activity (and corresponding reduction in 20-HETE levels) on changes in blood pressure, water balance, and regional blood flow.

Other areas I have explored include gender differences in hypertension—females display a greatly reduced risk of hypertension until the onset of menopause—and diabetes, as hypertension occurs in the vast majority of diabetic individuals and increases diabetic-related damage to internal organs.

My studies have largely been funded by external grants from the National Institutes of Health and the American Heart Association, and the research technologies have been acquired through a National Science Foundation grant.

All of my research incorporates undergraduate students who are interested in exploring physiological research, either as a potential career, as preparation for professional school, or simply have an interest in trying it out. Students participate in all aspects of my research, including surgical preparations and data collection and analysis, and students have presented this research at the local level as well as at regional and national meetings.

Additionally, students learn state-of-the-art technologies, such as telemetric recording, Doppler flow probe monitoring and vascular reactivity studies, which are techniques usually not available at the undergraduate level. I am always looking for students who express an interest in working in my laboratory.