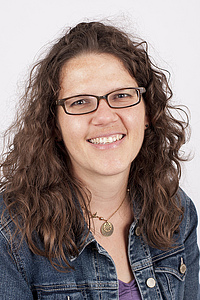 Marie Drews ‘02 returned to the Luther College English Department to join the faculty in the fall of 2015. She completed her M.A. and Ph.D. in English at Washington State University, specializing in 19th and 20th century American women’s literature, and served as Assistant Professor of English and Director of Women’s and Gender Studies at Augusta University in Augusta, Georgia from 2010-2015. Marie regularly teaches Paideia, as well as courses in women’s literature, American literature, and writing (specifically, a course to support diversely prepared first-year student writers).

Marie loves teaching research and is especially interested in getting students to consider the full range of primary and secondary sources they might use to develop insight into the topics they are exploring, even if – or, perhaps, especially if — these sources seem to be at the margins traditionally literary or scholarly material. In her research, Marie enjoys the same processes of inquiry and creative engagement that she fosters in the classroom. Using feminist, cultural studies, and food studies lenses, she examines constructions of femininity, nationalism, and racial/ethnic identity in domestic texts, including cookbooks, popular magazines, kitchen narratives, and domestic fiction, as well as alternative texts associated with visual and material culture. A second thread of her research examines representations of food, consumption, and women’s and girls’ bodies in literature and popular culture. Marie is married to Mike Garcia. Together they have two daughters named Lucy and Annie. When Marie is not at school, you’ll likely find her tromping around Decorah with her girls and Toby, the giant Golden Retriever.