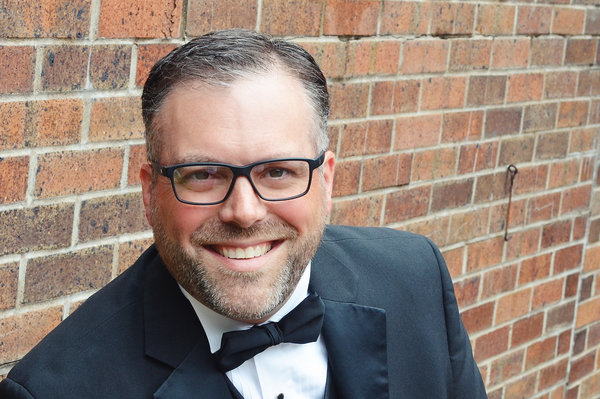 A native of Detroit Lakes, Minnesota, Mark Potvin is conductor of Cathedral Choir and Norskkor at Luther College in Decorah, Iowa. He holds a DMA in Music Education from Boston University (Boston, MA), a MM in Choral Conducting from St. Cloud State University (St. Cloud, MN), and a BA in Music from Luther College. Dr. Potvin’s conducting mentors include Weston Noble, Timothy Peter, Sandra Peter, Lee Nelson, and Matthew Ferrell. Mark is in demand as a clinician and adjudicator throughout the Upper Midwest, and recently served as guest conductor for the Twin Ports Choral Project’s encore performances of Considering Matthew Shepard in February 2020.

At Luther College, Dr. Potvin teaches conducting, secondary choral methods, musical theatre, and assists in the supervision of student teachers. He is actively involved with the award-winning productions of Christmas at Luther as a member of the artistic team, technical director, and primary drama coach. Dr. Potvin has co-chaired the department’s COVID-19 task force since May 2020 and helped shape the protocols that have safely guided music operations during the pandemic. He also facilitates the work of the faculty music marketing team and coordinates that work with campus-wide marketing and communications efforts.

Aside from his duties at Princeton High School, Dr. Potvin served as Artistic Director for the East Central Minnesota Chorale (ECMC) from 2007-14. ECMC is a civic choir representing more than ten East Central Minnesota communities in Chisago, Isanti, Kanabec, Mille Lacs, and Pine counties. He is the founding director of Unum Vox, ECMC’s regional high school honor choir, and led that ensemble through its first three seasons. From 2008-11, Mark fulfilled various teaching duties at St. Cloud State University (SCSU). At different times, his positions included assistant conductor of the SCSU Concert Choir and as conductor of both the SCSU Chamber Singers and Men’s Chorus.

An active member of ACDA, Potvin was named “Outstanding Young Choral Director” by the ACDA of Minnesota in 2008, edited ACDA-MN’s statewide journal, Star of the North, from 2008-11, and served as Repertoire and Standards Chair for Men’s Choirs from 2011-13. He currently serves the Iowa Choral Directors Association as Repertoire and Resources Chair for College and University Choirs.

Mark is happily married to Susan Potvin, Associate Director of Music Marketing and Tours at Luther College. They are the proud parents of Noah and Simon.

For voice majors and nonmajors with little or no background in those areas. Beginning guitarists will study music notation, tablature, chording, and classical guitar literature. Additional fees will be assessed for this course.

Continuation of MUS 115. For majors and non-majors who have had some piano or voice. Emphasis is on developing good reading and practicing skills. Additional fees will be assessed for this course.

Norskkor is one of five auditioned choral ensembles at Luther College and is conducted by Mark Potvin. Established in 1981, the group is primarily comprised of first-year tenors and basses, selected each fall and spring by audition. The ensemble participates in worship services, performs at the Family Weekend concert, participates in Christmas at Luther and Dorian Vocal Festival, and presents an annual spring concert with Aurora, Luther’s choral ensemble for sopranos and altos.

Cathedral Choir is one of five auditioned choirs at Luther College.  The ensemble is comprised of select singers drawn mostly from the rich talent of the college’s sophomore class. Cathedral Choir participates actively in campus worship, in the Christmas at Luther concerts, and at special events and concerts during the academic year, including an annual spring tour.