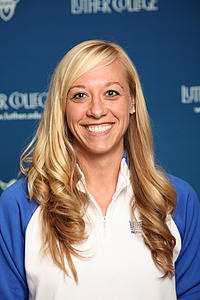 The 2022-23 campaign will be Amanda Bailey’s thirteenth as head coach. During her tenure she has revived the women’s basketball program from a period where the Norse had posted three straight years of single win seasons, to a team that has consistently battled for a league title and has made five consecutive appearances in the conference tournament (2015-19). Four of these years the Norse advanced to the conference tournament championship game, capturing the tournament title in 2015 and advancing to the NCAA III National Tournament.

Amanda also serves as Title IX Deputy Coordinator for Athletics ensuring the education of Sexual Assault Prevention for all student-athletes and coaches. Amanda serves on Care Team and assists in compliance for NCAA/Title IX responsibilities.